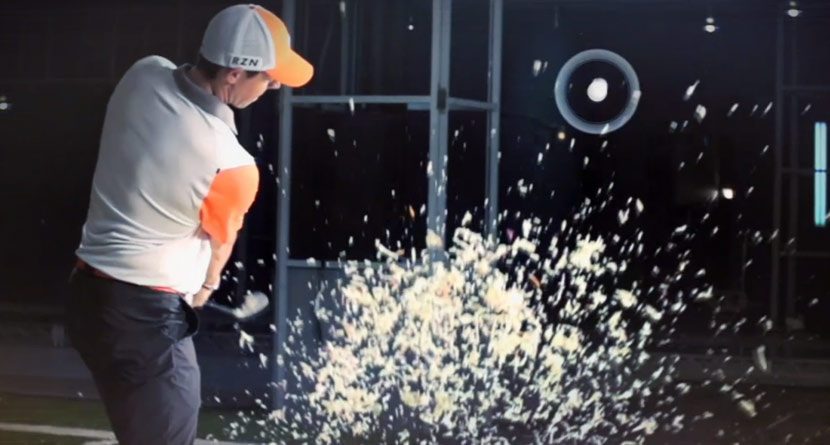 You’ve likely never hit a golf ball out of coleslaw, and you probably never will. Partly because it’s hard to hit out of, with cabbage being 20 times thicker than grass, and mostly because it’s just a ridiculous idea. As ludicrous as it is, Rory McIlroy has done it.

In a new segment for ESPN’s “Sport Science,” John Brenkus put McIlroy’s game to the test by having him hit a bunker-type shot out of 900 pounds of coleslaw, which was more than six inches deep. Not only that, but he was asked to hit a ball through a 10-foot doorway from 70 yards away, in the dark. The two challenges are insane, but the results are awesome:

Not only did McIlroy drill the ball through the doorway first try, but he even landed it in the “bunker” of coleslaw. He nearly made the first “slaw-shot” attempt in the bucket, but just missed it right.

Unfortunately for us, McIlroy wasn’t completely covered in coleslaw after the shot.

Hitting out of coleslaw might be good practice for the U.S. Open at Pinehurst with all of the bunkers he’ll have to contend with.

For the final challenge, McIlroy hit a 50-foot putt on glass. This glass surface is nearly 3.5 times faster than typical U.S. Open speeds, which are fast to begin with. McIlroy only needed two attempts to drain the lengthy putt, and his first missed by only half of an inch.

With putts like that, McIlroy looks well-prepared to take on the turtle-back greens at Pinehurst.