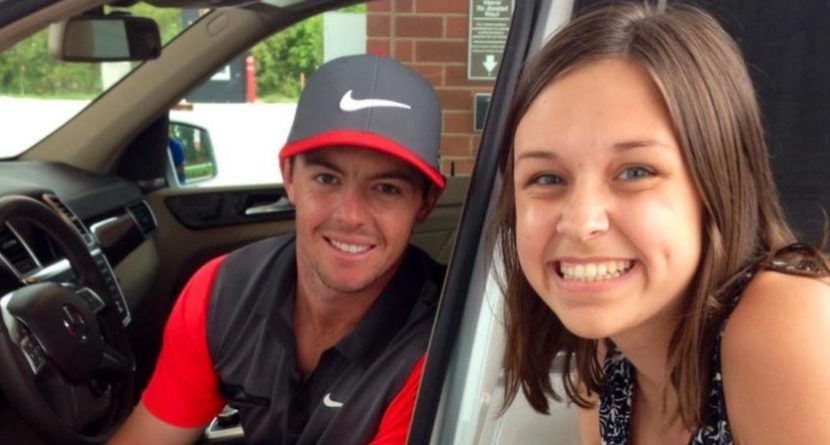 After an opening-round 66 on Thursday that left him one shot off the lead at the PGA Championship, Rory McIlroy did the usual: turn in his scorecard, speak to the media, and hop in his courtesy car to ride back to his place of rest for the week.

He’s the No. 1 golfer in the world, fresh off a major championship and World Golf Championship that collectively earned him nearly $3.2 million. Surely he hired a driver to escort him to and from the course as he seeks a second straight major, or at least had his caddie, J.P. Fitzgerald, take the wheel, right? Nope.

McIlroy not only drove his own silver Mercedes-Benz SUV, he was about to pump his own gas. Something about carding five back-nine birdies and then pumping your own gas on the way home seems odd, but that’s McIlroy – odd in the sense that he’s normal. He’s quite unlike what we’ve come to expect the world’s greatest athletes to be like.

He would have pumped his own gas but let Fitzgerald have the honors when he received a phone call. After that call was over, a teenage girl politely asked for his autograph. Of course he obliged. Then the girl’s father asked if he could snap a picture of McIlroy and his daughter. Of course he obliged.

Maggie Campbell’s dad recounted the experience here, and then tweeted out an incredible photo:

Yep, pretty sure that’s what McIlroy was wearing on the course an hour or so beforehand:

This McIlroy kid, he’s all right, no?