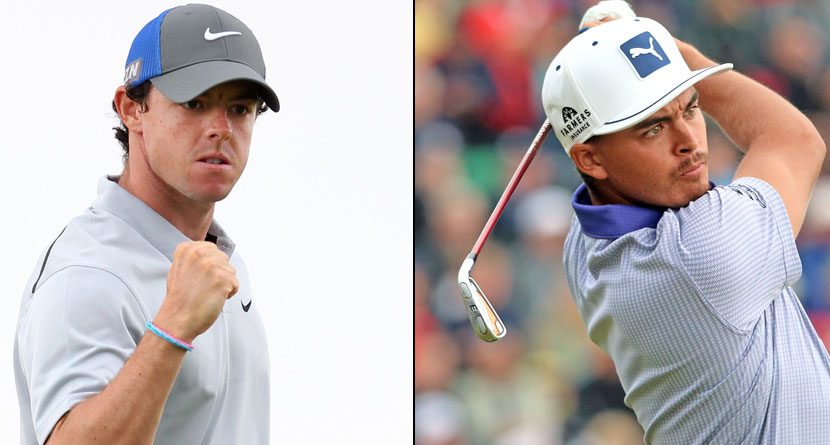 HOYLAKE, England — Rory McIlroy started the third round of the Open Championship at 11:01 a.m. BST. He was four shots clear of Dustin Johnson. By 11:18 a.m., his lead had been cut to two. Johnson birdied the opening hole, while McIlroy dropped a shot after putting his approach into a greenside bunker and barely escaped from the wet sand. Game on.

But not for long. When he holed a 10-footer for an eagle at the 18th some four hours and 50 minutes later, McIlroy was six shots ahead of the field with his third major at his mercy.

He didn’t have it all his own way though.

The Northern Irishman had to hole an eight-foot putt at the second to avoid dropping another shot, and got back to where he started when he birdied the par-5 fifth hole. Tiger Woods, meanwhile, started with two birdies but needed a bucketload more to get back in the mix, having made the cut on the number, 14 behind McIlroy.

Play started early because of the threat of thunderstorms, with the field going off at the first and 10th tees. Although the rain was falling steadily, there wasn’t a breath of wind and conditions were perfect for low scoring.

Indeed, the course seemed to be at the mercy of any player prepared to take it by the scruff of the neck. Early on, it looked like that man might be Victor Dubuisson, the Frenchman who plays with a touch of Seve Ballesteros. He dropped a shot at the second, but then birdied the third, fifth and sixth to move to 6 under par.

Rickie Fowler decided that he needed to attack the links and started brilliantly. He birdied the first, second, fifth and sixth and, at 10 under, was just two behind McIlroy.

The seventh hole may turn out to be pivotal in deciding the outcome of this championship. It is a par 4 that measures 480 yards, and it has been the toughest hole on the course all week. McIlroy hit his drive into thick rough on the right side of the fairway, while Johnson dumped his into a pot bunker. Both men could only advance their balls a few yards.

They both found the green with their third shots but while the American had to settle for a bogey, McIlroy rattled home a 20-foot putt to save par. He was four ahead of Johnson again, and three in front of Fowler. Johnson dropped shots at each of the next three holes and it looked like another challenge was petering out for the big-hitting American.

Fowler reduced the deficit to two when he birdied the par-5 10th, and it remained that way when McIlroy could only par the same hole. But not for long. Fowler, with the bit between his teeth, also birdied the 11th, holing a huge putt. The lead was down to a single shot.

It was like watching two boxers at the peak of their powers. McIlroy, in the group behind Fowler and Garcia, holed one from 10 feet for his birdie at the 11th.

Back came Fowler. An approach to four feet at the 12th meant he had birdied four holes in succession and stood at 12 under. He had birdied seven of the 12 holes he had played.

McIlroy seemed certain to fall behind for the first time when he found thick rough to the right of the par-3 13th, but he holed a tricky seven-foot putt to save par.

Then McIlroy dealt a vicious blow to the body. Just after Fowler had dropped a shot at the 14th, Rory followed him onto the green and holed a tramliner for another birdie. It was a two-shot swing. The knockout blow was delivered at the 16th. Fowler dropped a shot but McIlroy played a fantastic mid-iron into the green at the par 5 and holed for eagle. All of a sudden, he was five in front.

He dropped a shot at the 17th when he fluffed a chip, but it didn’t really seem to matter as Fowler had already bogeyed the same hole. The American finished with a birdie for a 68 and a 54-hole total of 206, 10 under par.

He then had to watch McIroy rifle an iron to within 10 feet at the last. Another eagle and a round of 68, 16 under par and six shots clear. Good luck with that on Sunday, Rickie.

And Tiger? Sad to report that his Open horror story continued on his second nine. He birdied his 10th hole (No. 1), but then it all went horribly, horribly wrong.

A double-bogey at the second (he has now played the hole in 5 over par this week) was followed by a triple-bogey at the seventh. He managed a birdie at the last but a 73 leaves him in a tie for 58th place. His own reports of his re-emergence were, it seems, grossly exaggerated.