Round 4 Recap: Rory Makes It Reign at PGA Championship 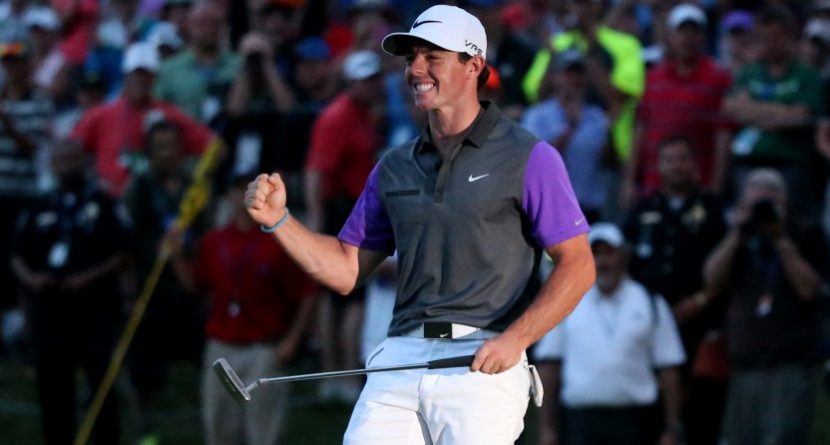 On a Sunday such as this, where do you begin? If there has ever been a better final day in a major championship than this one, I haven’t seen it. The 2014 PGA Championship at Valhalla will go down in history as one of the best of all time.

And when it was all done, Rory McIlroy had won his third tournament in a row, his second successive major, and his fourth in all. Only Jack Nicklaus and Tiger Woods had won four majors by the time they were 25, the age McIlroy is now. Those are the facts, but they tell nothing of the drama. And what drama we saw.

The script had McIlroy coasting to a second successive major title. The reality saw Rickie Fowler and Phil Mickelson, playing together, trading birdies while, up ahead, Henrik Stenson was enjoying the round of his life.

McIlroy, you will remember, began the round with a one-shot lead on 13-under par. By the time he walked off the sixth green he was chasing shadows, having dropped two shots.

Fowler, on the other hand, followed a dropped shot at the second with four birdies to reach the turn in 32. And another at the 10th took him to 15-under par. Mickelson? Four birdies in a front nine of 31 and another at the 11th. There were also a couple of outrageous par saves. Fifteen-under. Stenson was even better — he birdied the first, third, fifth, seventh and ninth. The Swede reached the turn in 30. Then another birdie at the 13th. Yes, you’ve guessed it: 15-under.

And McIlroy? Well, there was a birdie at the seventh, but that only took him to 12-under. He was three adrift and looking for a miracle. It came at the par-5 10th. Nobody had hit the green in two all day. McIlroy did, striking a 3-wood to six feet and holing the putt for the eagle that took him to 14-under.

And he should also have birdied the 11th and 12th after majestic iron shots.

This was as strong a leaderboard as we have had on the final day of a major for some time. The absence of Tiger Woods apart, the PGA of America must have been licking its lips at the prospect of what lay ahead. What a cast we had. McIlroy, Mickelson, Fowler, Jason Day, Louis Oosthuizen, Stenson, Steve Stricker, Jim Furyk, Adam Scott, Hunter Mahan, Mikko Ilonen, Jamie Donaldson, Ryan Palmer, Graham DeLaet.

Early on, as huge black clouds gathered overhead, it seemed certain that the final round would be hit by weather delays and, sure enough, the heavens opened and Valhalla’s greens quickly became waterlogged. Before long, there were rivers of water running across some of the greens and there were doubts as to whether the players would get back on the course and the leaders would even tee off.

An army of greenkeepers did their best to brush the rainwater away, but it was a huge task. A babbling brook that runs through Valhalla had become a raging torrent, but as the rain eased off so the water disappeared.

And there was a bigger headache to deal with. The early starters had teed up in dry conditions, which meant that unless they were all asked to begin again, there could be no question of lift, clean and place. Parts of certain fairways were saturated, and there was little doubt that we would see many plugged drives or, at the very least, balls covered with mud.

But the PGA had a solution for that too. Hundreds of towels were placed on top of the dampest parts of the fairways and staff stamped upon them, trying to draw the worst of the moisture from the ground. You just had to admire their ingenuity, just as you had to admire the stoicism of the fans, who remained as the rain tumbled down and were rewarded with a resumption of play.

A total of 80 minutes had been lost.

The first big move of the day was made by Ernie Els. Having opened with a couple of pars, he birdied the third, fourth, fifth and sixth holes and, at 9-under par, was only four behind McIlroy, who had yet to start. A fifth birdie of the day at the ninth took him out in 30 and moved him to 10-under.

The day began with McIlroy on 13-under par, leading Bernd Weisberger by one. Ilonen and Stenson both birdied the first and third to go 11-under, while Fowler also birdied the opening hole to join the Scandinavians. When Mickelson birdied the first and third to move within a shot of the lead, the crowd could barely contain its excitement. And he was muttering to himself after failing to hole another birdie putt at the fourth. His playing partner, Fowler, did make his birdie putt, however, to go 12-under.

What a start we had. After opening with two pars, McIlroy stood on the third tee with 20 players separated by five shots.

Els continued his brilliant form on the back nine, holing a long putt for a birdie-2 at the 11th to reduce the gap to McIlroy to two, but he couldn’t maintain it and finished his work on 11-under.

The Northern Irishman, meanwhile, dropped a shot at the third and with Stenson picking up a birdie at the fifth, we had five men tied at 12-under — McIlroy, Fowler, Weisberger, Mickelson and the Swede. It was incredible stuff. And it continued until we were left with four men standing — Mickelson, Fowler, Stenson and McIlroy.

Stenson was the first to blink, missing an 18-inch par putt at the par-3 14th.

McIlroy struck another imperious shot to the green at the 13th and this time he holed it to join Mickelson and Fowler at 15-under. Having played the first six holes in 2-over, he had played the next seven in 4-under. He reached the tee at the 14th just in time to see the result of Fowler’s shot, way right of the green.

The American finished fifth at the Masters and second at both the U.S. Open and the Open Championship, and he didn’t want another near-miss here. However, he couldn’t save par at the 14th. Incredibly, McIlroy and Mickelson were tied for the lead. But could they get the job done before darkness fell? Not if there was a playoff, that was for sure.

We all thought that Mickelson was kidding nobody but himself on Thursday when he told us that he had found something. If he could win this thing he would turn his season around in the blink of an eye.

Fowler was clearly beginning to feel the pressure, and at the 16th hit his worst drive of the week, almost finding the 15th fairway. He was left with 212 yards to the green and had to hit a huge hook if he was to reach the green. Such was the time Fowler took to hit his second that McIlroy chose to hit his drive before the American played. Having hit his worst shot of the week, Fowler struck one of his best, clearing the trees and landing on the front of the green. He was 100 feet from the hole but saved his par.

On the same hole, Mickelson missed the green in two and dropped a shot. All of a sudden, McIlroy was back in the lead on his own.

Stenson needed an eagle at the 18th. Instead he hooked his approach to the par 5, finished up in the mud and failed to reach the green. Finally, his race was run. A 66 it was and another great finish in a major for the Swede.

With darkness fast approaching, Fowler and Mickelson scrambled pars at the 17th, so they went to the last tied on 14-under. Immediately behind them, McIlroy drove into the fairway bunker and then hit another approach to eight feet. Another birdie would surely give him the title. And, of course, he got it. At 16-under, he was now two ahead.

Only an eagle would do for Mickelson and Fowler. Both men were still on the tee when McIlroy and Weisberger arrived and it was getting so dark that the two Europeans hit their drives before the Americans reached theirs.

Mickelson almost holed his third shot but had to settle for a birdie. Then it was Fowler’s turn but his eagle try never threatened the hole and he ended with a par. Mickelson 15-under. Fowler 14-under.

But the drama wasn’t quite finished yet. McIlroy put his second shot into a greenside bunker, leaving himself the task of getting down in three from about 40 yards. He hit a poor bunker shot but rolled the putt stone dead to win by a shot. With rounds of 66, 67, 67 and 68, he finished on 16-under par.

There will be some who will say that the course was too easy for a major. Nonsense. There was nothing that the PGA could do about the weather — all the rain meant the greens were soft and receptive, but the shots still had to be played. And McIlroy played them better than anybody else.