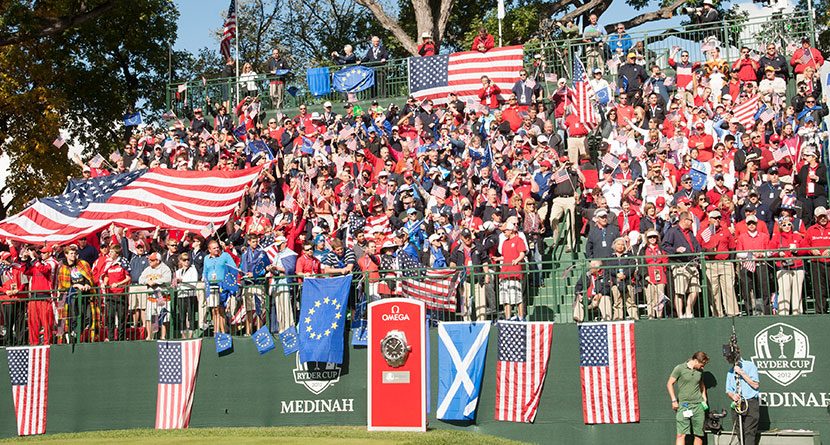 The 250,000 spectators expected at the Ryder Cup later this month are more than likely to enjoy their experience.

They just can’t share it with social media — thanks to the utterly ridiculous rule Ryder Cup officials will force on the patrons that prohibits any non-private photo, audio or video.

Introduced this year, the new rule nixes any social media sharing of images from the grounds at Gleneagles and prohibits any audio or video from being captured.

According to The Telegraph:

“Images taken with a camera, mobile phone or other electronic device cannot be used for any purpose other than for private and domestic purposes. You must not sell, license, publish (including, without limitation, via Twitter or Facebook or any other social media site) or otherwise commercially exploit photographs.”

Ryder Cup popularity and interest are at an all-time high and following the theatrics at Medinah in 2012, the event is bound to pull in a wide variety of viewers — including non-golf fans. The ban on social media use only limits the reach the event will have on potential new fans of this wonderful game.

The PGA of America and European Tour remain unified on the ban and do so under the guise of limiting player distraction despite the fact that the Ryder Cup is as boisterous a sporting event there is. Did event officials miss Bubba Watson urging the home crowd to continue their cheers while he was teeing off in 2012?

In addition to the social media ban, other rules to be enforced, according to The Telegraph, include:

“…mobile phones must be in silent mode at all times. Other prohibitions include a ban on autographs, running, personal mobility scooters and children under five.”

No running? Let’s just hope Sergio Garcia got the memo.