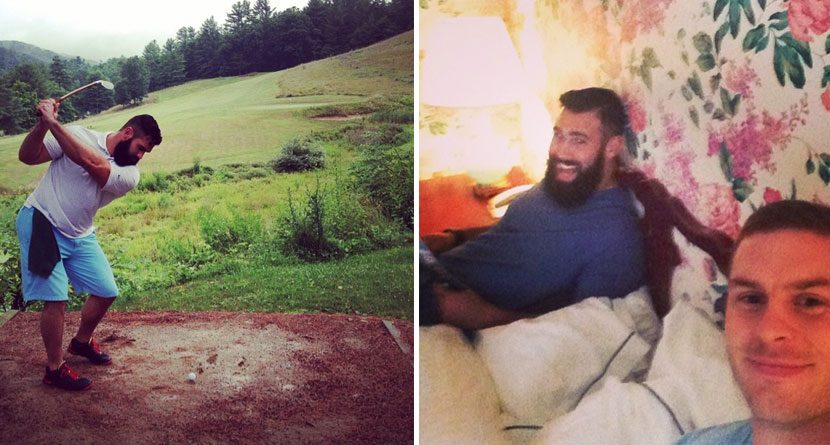 The New Orleans Saints are holding their training camp at The Greenbrier for a few weeks beginning on Thursday, so the team is getting settled into its new home for a while. While The Greenbrier, which hosts the PGA Tour’s Greenbrier Classic every year, is a pretty fantastic place to call home, there’s just one problem … the rooms aren’t exactly fit for large, tough football players.

Actually, they’re far from it.

First it was Jimmy Graham being less than happy about his room at the resort, but not because it doesn’t say “highest paid tight end in the NFL.” Quite the opposite, actually.

Graham is a 6-foot-7, 265-pound manly-man, but I guess he doesn’t want to stare at pink flowers on the wall all day … weird.

He’s not the only one with a slightly awkward room situation, though.

Saints receiver Andy Tanner and fullback Austin Johnson were not only thrown into a room with pink flowers as well, but there’s only one bed.

Pink flowers and @andytanner_14 for the next three weeks. It’s business time

Probably not an ideal living situation for a couple of players trying to make the team, but at least there’s one bed, right? Oh, and don’t forget about the “water fountain.”

However, things aren’t all that bad. Tanner and Johnson were able to hit one of the resort’s courses, albeit with a less-than-new set of clubs. They played Oakhurst Links, which claims to be “the first golf course designed and built in America.” Says The Greenbrier website: “Conventional golf clubs are not used at Oakhurst. Instead, players use hickory-shafted clubs and hit gutta-percha balls off tees fashioned from sand and water the same way it was done more than 130 years ago.”

The Saints will be at The Greenbrier until August 13, so these guys have plenty of time to get to know each other (and the flowers on the walls).

Other Hot Links:
– Golf Ball Diver Bitten By a Gator for a Second Time
– The Fringe: Claret Jug Needs a Bath & Trump Still Dissing Pinehurst
– Is This The Greatest Hole-In-One Of All Time?
– Throwback Thursday: Champagne and a Movie
– Yeah Baby! Loudmouth’s Shagadelic Open Rocks
– 5 Things You Need to Know: RBC Canadian Open