Slice of Bacon: A Protracer App & Our Next First-Time Major Winner 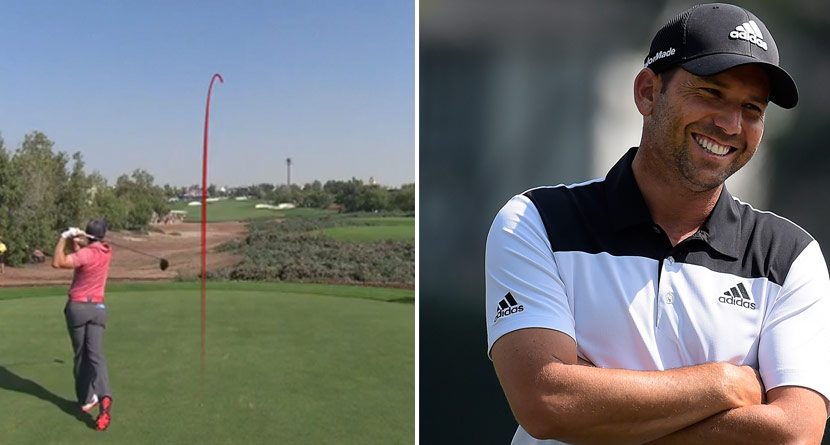 The PGA Tour season might be over (okay, 2014 is over, 2015 is well underway) and the European Tour might be over (well, it also starts back up this week), but golf questions never stop! Below are some fun questions to get us through this next winter spell, submitted via Twitter.

@shanebacon how much would you pay for a protracer app for your own shots?

Bacon: Oh my, a solid opening question to my first mailbag in weeks (okay, fine, months … TV takes a lot out of ya!).

As a golf nerd, the Protracer is one of my favorite technologies introduced to professional golf viewing since someone let their kids mess around with a Scramble board and come up with “Konica Minolta BizHub SwingVision.”

My question is, how is this not an app? We have an app that helps single people find dates BASED ON FACIAL HAIR, yet we don’t have an app that allows us regular golfing folk to see what our ProTracer shots look like? And to go beyond this, wouldn’t Protracer be more fun for HORRIBLE golfers? Think about it, if you’re hitting beautiful draws and low, hard fades, it’s awesome to watch, but when Sergio Garcia did this with the Protracer around, everyone with a computer retweeted it.

Seeing someone hit a shank with a Protracer would be golf gold, and would be something that would circulate amongst golf buddies looking for something to rag on each other with.

So, to the question, how much would I pay for the app, honestly? I’d pay $19.99. That’s a good number because A.) I’ve never spent more than $1.99 for an app and B.) we can all joke about hundreds and such, but really, $20 seems like a good investment in something that would bring plenty of cool shots and a ton of laughs.

Also, I hope this doesn’t get invented because my Instagram would immediately just be these and these alone.

@shanebacon Did you really play a shot off a patch of ice the other day? And, how does it compare the “actually very easy” cart path shot?

WE’RE NOT IN ARIZONA ANYMORE, FELLAS!!

And to your question, hitting off a cart path is a lot warmer. Also, something I didn’t share? About two seconds after hitting that shot, I ate it on the ice. Yep, right on the keister. There is photo evidence. I’m still not used to this whole “ice on the golf course” thing.

@shanebacon Which major are you most looking forward to in 2015?

Bacon: I mean, the default answer is The Masters, because it’s the longest wait between majors and Augusta National, pimento cheese, Amen Corner, etc. (I made this handy Masters countdown on Tumblr years ago if you’re in the mood to get depressed).

But, really, it’s always the British Open when it goes back to St. Andrews. If you haven’t heard me mention it a thousand or so times already, I used to caddie at the Old Course and fell in love with the place. It isn’t just the golf course that gives the Old it’s beauty. It’s the fact that the town has embraced and wrapped itself around the golf there.

I told Bubba Watson during an interview a couple of years ago that I think he has a great shot to win this Open at St. Andrews and I stand by it, but really, with the distance all these guys hit the ball now, it’s going to be interesting to see how low they can go if the weather stays away.

In 2010, Rory McIlroy nearly, and should have, shot 62 in the opening round but he missed a bunny on the 17th. If the weather is calm, someone is going to break the major record at the place golf started, so that’s something to look forward to.

Also, Chambers Bay steals this answer if Rory wins at Augusta because, well, let’s get to the next question.

@shanebacon What would you rather see in ’15: Tiger win a Major or Rory complete a Rory Slam?

Bacon: I’m a little torn on this because it’s battling my internal passion versus what is good for business.

I run into more people these days that say that they only watch golf when Tiger’s involved, so a Woods major win, especially at Augusta, would make 2015 the biggest golf year since the Tiger Slam.

Which, let me say, is a pretty good segue to the second part of this question. Would I want to see a Rory Slam? Absolutely, it would be absolutely amazing to think a golfer could win four majors in a row (and if you don’t think so, just look at the names that have just two in a row since World War II; Sam Snead, Ben Hogan, Arnold Palmer, Lee Trevino, Jack Nicklaus, Tom Watson, Nick Price, Padraig Harington, Phil Mickelson, Tiger Woods and Rory McIlroy).

People don’t realize how hard it is to simply win a major (just ask guys like Sergio Garcia and Lee Westwood, incredibly talented guys without one), so to think of winning four in a row blows my mind. A Tiger major win would open the doors for a place in the record books, but he would have to win three more to catch Jack. If Rory wins the next two, he’s in a place only a couple of people have ever been.

So, I’m going with the Rory Slam slightly ahead of Tiger winning another one, because that would be in the history books while Tiger’s win would just get him a step closer to Jack.

@shanebacon @Back9Network who (and where) is the next first time major championship winner?

Bacon: Rickie Fowler at Chambers Bay. I also really like Sergio’s chances at the British, and Jordan Spieth at the Masters again.

Also, can we talk for a second about Henrik Stenson? How has he not won a major? Since 2008, Stenson has seven (7!) top-4 finishes in majors. So I like him at them all, as well.