Slice of Bacon: Rory vs. Tiger In 2015, Bad Golf Styles and More 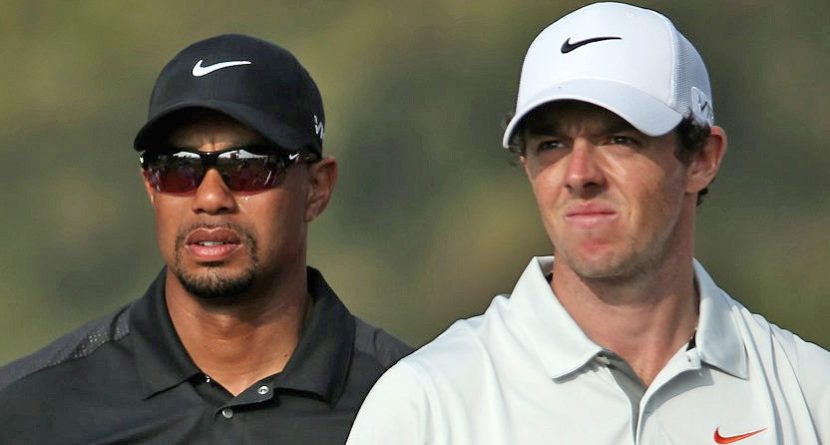 During the golf season, I receive a plethora of e-mails, tweets and more asking any and all sorts of questions about the game we love. Each week, we will compile the best of these and I’ll do my best to answer them.  Here goes nothing!

@shanebacon @Back9Network who has more wins next year,Tiger or Rory?

Shane Bacon: Only a crazy person would pick Tiger Woods here considering the way Rory McIlroy has played this season. The guy won two majors, has changed from “next big thing” to “potential Rory Slam at Chambers” and now finishes T-5 when he has an off week.

That said, I’m going Tiger. Why? Because when the guy is healthy, the main goal of his offseason, he will win 3-5 times on tour at a minimum. So many critics are lining up for the Woods funeral, forgetting that at this time a year ago we were crowning him Player of the Year.

Tiger’s game will be there if he can get the back/knee/Achilles healthy, and while that is a huge IF, the run Rory is one right now is just as much of a question mark, especially considering how long this offseason will be for a lot of the big names that don’t plan to play much after the Ryder Cup.

Bacon: Umm, the New Era caps? Can they be the MVP?

Looking at the 12 men that will represent the U.S., it’s easy to pick someone like Rickie Fowler (having one of the best seasons of anyone on tour) or Jordan Spieth (a rookie at this team event but finally past his 21st birthday hangover and playing some good golf).

But, I’m going Jimmy Walker. He hits the ball a mile, makes a ton of birdies, and has a chance to be the rookie that makes a difference. The missed cut at the Barclays aside, Walker has played some good golf the last month, and might be our best shot at an upset if he can go out and go 3-1-0 or something in his Ryder Cup debut.

Bacon: I’m more of a traditional golf dresser, going with classic outfits over something insane and flashy (I just turned 30, I don’t have that 21-year-old zest for life anymore!).

But for the things I will not wear on the golf course, it’s a simple list:

– No white belts. For some reason, I think the white belt has become a cop-out for golf outfits, something you can throw around your waist when you have no real idea of what you should be wearing. I used to rock the white belt, but it’s become such a popular choice, and I’m not sure it really makes your golf outfit look that much better. Also, just because you have white shoes on doesn’t mean you must wear the white belt.

– Matching isn’t always the best medicine. I see so many pros these days match throughout the outfit, and I think it looks lazy. A blue hat, a blue belt, and blue shoes? This is golf, not bridesmaid dress shopping. Who is the best dresser on tour right now? Adam Scott.  And he never obsesses over making sure his outfits look they just got ripped off a sporting good model. I think making your outfit look continuous is important, but sometimes a simple brown belt with a colorful shirt is enough to stand out.

@shanebacon @Back9Network Given Phil’s complaints, should Fedex Cup format be the same, only be 3 events, or 4 with a bye-week?

Bacon: As I said over the weekend, no professional golfer battling for a $10 million bonus should be complaining about their job. It might be tiring, it might be mentally fatiguing, but if you are ever considering speaking up against the “toughness” of your job, don’t.

If these guys are tired and don’t want to play, don’t play. It’s as simple as that. A top-100 PGA Tour player has one of the best lives in the world. There is absolutely no reason you should be doing anything but walking around wide-eyed screaming to everyone that will listen, “THIS IS SO AWESOME!”

Bacon: I think this question is better set for my buddies over at No Laying Up, who, well, aren’t big fans of laying up. Here is their response to the question:

The great Byron Nelson was once presented with the option of taking on a risky shot on the 13th hole at Augusta National in the 1937 Masters. He eventually opted for the 3-wood, plopped it over the creek just short of the green, and chipped it in for eagle. His reasoning for going for it? ‘The Lord hates a coward”.

Assuming you have the game to pull off the shot, the question above is a no-brainer. If I’m down two in a money game with Bacon, I’m going for that green even if it means putting the folks teeing off on the 18th in danger of losing their lives with a wayward shot.

I know this question is a parallel to Sergio laying up from 253 on the 71st hole of the BMW Championship when he trailed by two to Billy Horschel. In Sergio’s case, he had something to protect, (a high finish, and a boat load of cash and FedExCup points), that he wasn’t willing to risk. We roasted him for it, and he deserved it. Deep down, I’m sure he would agree.

I’m going to present an alternative scenario. Let’s say you’re 250 out, over water, but you’re currently having the best round of your life. If you par the last two holes, you’ll shoot two shots less than you’ve ever shot before. Do you go for it?

For me personally, if there is a sliver of hope, I’m going for the shot. I don’t know if I do that out of lack of fear, or fear of the harassment I would get from my buddies if I laid up (“DON’T YOU RUN A WEBSITE CALLED NO LAYING UP!?!?”). But here’s the conclusion I always ultimately reach. You just worked a 5-day work week, you got up at 6 am to pick up your buddies, drive to the course, pay $100 to play, and in a matter of days you’re going to be back at your desk thinking about golf again. Did you really come all the way out here just to lay up? Is that fun? The memories I have of the crazy shots I’ve pulled off outweigh the disappointment from the times I went for it and failed. The phrase goes for golf, and life in general. No laying up.

Couldn’t have said it better myself. Laying up is like a salad. It’s probably the safest move out there, but must we always live in the right lane of life? The one thing I’ll say with any amateur attempting to hit a long shot he isn’t comfortable with is to make sure you are comfortable before you take it back. Convince yourself you’re going to pull off the shot, because if you have doubt about it before you stand over the ball, that thing is going in the drink.

@shanebacon @Back9Network what 18 holes would make up your ideal course for a Ryder Cup?

Bacon: Do you want me to get fired from my new gig because I spent two straight weeks on this question? It’s too hard!

My initial thoughts were this; end on a par-5, having it a known golf course that is fun and can play both tough and hard. Pebble Beach ran through my head, as did Shinnecock and Kapalua (how crazy would a Ryder Cup in Hawaii be?!).

I batted around the idea of Bandon Dunes, because the course is amazing, hasn’t really been given the big television spot yet, and ends with a drivable par-4, tough par-4, and reachable par-5.

All that said, I still think TPC Sawgrass would be amazing for a match play event such as the Ryder Cup. You have the drama of the 16th, the “how am I even going to take this back?!” pressure of 17, and then a tough par-4 finishing hole that could see a birdie win or a bogey lose.

This question has so many answers, but those are the ones that initially popped up in my head.Feel free to give me yours at @shanebacon on Twitter.