Slice of Bacon: The Next Big Rivalry On The PGA Tour 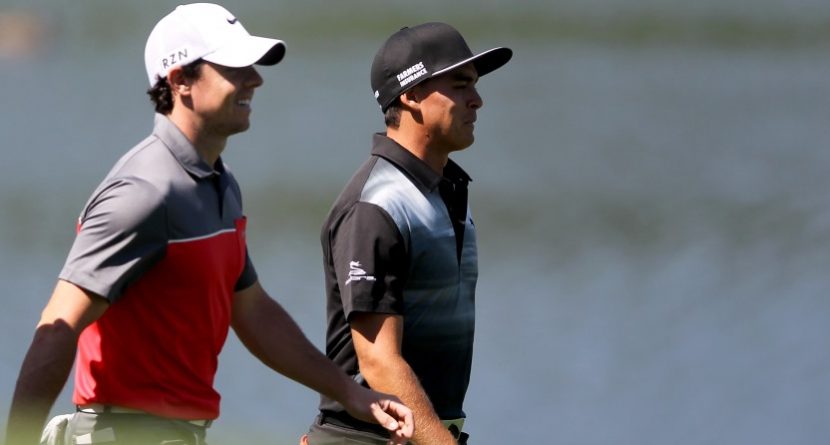 Have a question you want answered in an upcoming mailbag? Fire it my way on Twitter at @shanebacon and we will try to include it. Glutes are fired, let’s do this.

@shanebacon any era w a rivalry was better so if Tiger era is over and its now Rory’s era who would you say could make his long term rival?

Bacon: I love this question because it’s something we’ve talked about a bit on the show the last few weeks. I think at this point, the Tour is definitely Rory’s, and I agree that sports needs a rivalry of sorts to help with identity, interest and watchability.

Rory versus Rickie Fowler last year was great for young fans, but how hard is it to pick a side when both guys genuinely like each other and share private jets/dinners around each tournament? Rickie is a nice kid, as is Rory, but I’m not sure that’s the one.

Reed, fresh off this piece by Shane Ryan (We talked with Ryan about that piece on The Turn), is not shaking the “villain” tag anytime soon, and almost seems to embrace it. He’s 24, he’s fiery, he has some enemies on Tour, and he’s shown a wild side on and off the course a few times already.

My next statement might surprise you, but I think Patrick Reed is as important for the foreseeable future of the PGA Tour, especially in the U.S., than anyone else out there. Jordan Spieth might be a more talented Fred Couples (cool, confident, likable), but Reed has that “like him or hate him” edge that forces you to pick a side (think a young Sergio Garcia). Reed already has four wins, should have gone undefeated in his first Ryder Cup, and is 2-0 in PGA Tour playoffs (against Spieth and Jimmy Walker).

Related: ‘Slaying The Tiger’ Author Shane Ryan On Patrick Reed: ‘He Can Be A Prickly Pear’

He is the rival I want to see go up against Rory in big events. He’s the one person out there that thinks he can beat Rory head-to-head without his A game. Reed not only wants to be in that moment, but lives for it, and would be so fired up on the 1st tee in the final group on Sunday at a major that even Rory would take notice.

On that same note, I was thinking last week about my top-five final groupings I want to see at the 2015 Masters. I have said for a long time that seeing Tiger Woods and Phil Mickelson battle late on Sunday at Augusta National is something we really should get to see before it’s all said and done, but that looks as likely this season as the Masters moving locations.

So, my top-five final groups for Sunday at Augusta are as follows:

I’m in on all of these. When does the Masters start?!

Bacon: I get the idea behind this question. It took Day nearly four years to snag a second stroke play win on the PGA Tour with his playoff victory on Sunday at Torrey Pines.

But a healthy Jason Day is one of the top-five players on the planet (copyright, P-Reed), and this win only adds to his confidence. I think Day wins two more times this season. And I think he’s my pick for Augusta as we sit 58 days out.

Bacon: Well, Anthony, I think you just came up with one of my favorite ideas of 2015 so far. Considering Chris Berman and Colt Ford are on the short celebrity list this year for Pebble Beach, having a contest to allow a “normal” person to play-in would be amazing.

I also like the idea of integrating TopGolf into this. Have a contest across the country, at all the TopGolf’s, and make it as simple as possible; highest possible score at TopShot (the game that forces you to actually hit all the shots at their facilities).

Related: An Exclusive Look Inside TopGolf

You could even have a qualifying tournament, take the top three scores at each location and have everyone at the Talking Stick location in Scottsdale, Ariz. for a spot at the Pebble Beach Pro-Am. I’m all in on this idea. TopGolf, can we make this happen?

@shanebacon if you were playing in @attproam, which celebs/athletes/musicians would you want to be paired up with?

Bacon: Danny, I’m going to answer your question two ways. First, from the list on the website, I would obviously go with Bill Murray. I think playing with Bill Murray in a Pro-Am is right up there with handing a ball off to Barry Sanders and catching for Nolan Ryan.

But, if I could pick ANYONE in the world as my Pro-Am partner, I’m going with Jimmy Fallon. The Golf Digest cover boy admits he loves the game, is obsessed with it, and I think just picking his brain about his experience in this crazy world of television for four hours would be pretty amazing.

Plus, I would laugh. A lot.

@shanebacon After Sunday night… which golfer would be most likely to show up at the Grammys?

Bacon: I mean, is this really a question? It has to be Bubba Watson. The guy is always at big sporting events and what not and he loves dressing like he’s competing with Lady Gaga in the “fashion” department (if you don’t believe me, look at these shoes he wore to the Thunder game the other day).

Be bold, be daring, be Dazzle, be Bubba. (H/T @EyeAmTruth) pic.twitter.com/wVLiUgx15g