Studs & Duds From the 2014 PGA Championship 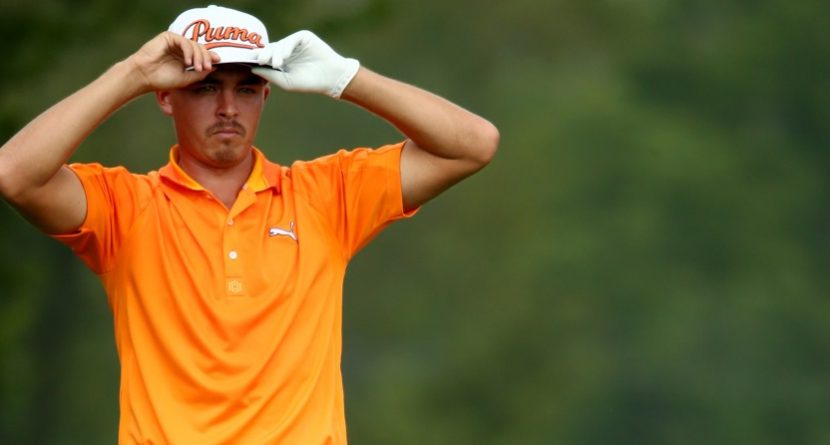 Some like to argue that the PGA Championship is the “minor” major. Yeah right. Did you see that final round Sunday at Valhalla? Easily the best major of the year, if not the best of the past few years.

There were plenty of studs to go around, none more so than Rory McIlroy, who began the day with the lead, lost it, gained it back, then held on for his second major of the year.

The victor notwithstanding, here are five studs from the PGA Championship, to go with four duds at the other end of the spectrum, and one right in the middle:

Rickie Fowler: What a year this kid had at the majors – T-5 at the Masters, T-2 at the U.S. Open, T-2 at the Open Championship, T-3 at the PGA. And if it weren’t for a lipped-out putt on his 72nd hole, that third place would have been another runner-up. It’s a shame he has zero wins to show for going a combined 32-under par at the four majors. In fact, Fowler is the first golfer ever to place in the top five at all four majors and not win one. Phil Mickelson: Where did Lefty come from? He hadn’t placed in the top 10 all year in the United States, and hadn’t come close to contending at major since he won last year’s Open Championship. But there he was with an eagle at 18 on Friday for a 4-under 67, four birdies in the last five holes on Saturday for another 67, and five birdies in all on Sunday in the penultimate group for a 66. His final score was a 15-under 269, one behind McIlroy. And Mickelson played himself on to the Ryder Cup team.

Ryan Palmer: We half expected Palmer to fade after his opening-round 65 gave him a share of the 18-hole lead, and we were sort of validated when he carded a 70 on Friday. But the Texan responded with a 69-68 weekend, putting him at 12-under for the tournament, tied for fifth place. That marks the 37-year-old’s first career top-five at a major, and only his second top-10 after placing 10th at the 2011 Masters.

Ernie Els: It was as if the 44-year-old Mickelson didn’t want to let the kids run away with his sport, and Els, also 44, wanted something to say about it too. A Sunday 65 – which included five front-nine birdies – brought the Big Easy down to T-7, his best result of a lackluster year, and his best major result since last year’s U.S. Open (T-4).

Steve Stricker: Another strong showing for the old guys as Stricker, 47, teed it up for only the 11th time this year and finished T-7, giving him a third straight year with a top-10 at a major. The guy really only plays big-time tournaments in his semi-retirement, yet still performs with the best of them. Earlier in the week he was named a vice-captain for the U.S. Ryder Cup team, but with all the injuries and dropouts, Stricker might be better suited to actually play.

Bernd Wiesberger: Austria’s finest golfer impressed by going 12-under through three rounds to book himself a spot in the final Sunday group with McIlroy. But after six birdies and zero bogeys on Saturday, he could do no better than zero birdies and three bogeys on Sunday. He wasn’t quite up to the task with all the big guns around him, but still a great showing (T-15) for someone who had only made one other previous cut at a major.

Jordan Spieth: After the 20-year-old tied for second at the Masters this year, we all figured the wunderkind’s first major was right around the corner. But Spieth, now 21, has only faded since. In the grand scheme of things, he’s still a kid who entered the week No. 11 in the world and will be playing for the U.S. Ryder Cup squad next month. But at the PGA he missed his first major cut of the season, and he hasn’t been in contention since May at the Players Championship. Keegan Bradley: Ranked 11th in the U.S. Ryder Cup standings, Bradley needed a strong showing at Valhalla, the final event in which players could earn points, to assure himself a spot on the team. He missed the cut and finished one stroke behind Tom Watson, the 64-year-old coach Bradley needed to impress.

Lee Westwood: The 41-year-old Englishman looked primed to get off the “Best Yet to Win a Major” list with his opening-round 65 that gave him a share of the lead. Then came a double-bogey and two bogeys over four holes on Friday en route to a 1-over 72. A pair of 69s on the weekend brought him to T-15, but this now marks Westwood’s first season since 2008 in which he didn’t record two top-10 major results. He’s played 67 career majors without a win, the most of any active player.

Zach Johnson: Right at No. 9 in the U.S. Ryder Cup standings, the last automatic spot, Johnson would have served himself well to finish strong at the PGA. He entered Sunday at 1-under, and left 5-over. Four bogeys on the back nine nearly cost him a trip to Gleneagles, but he sneaked into the top nine.