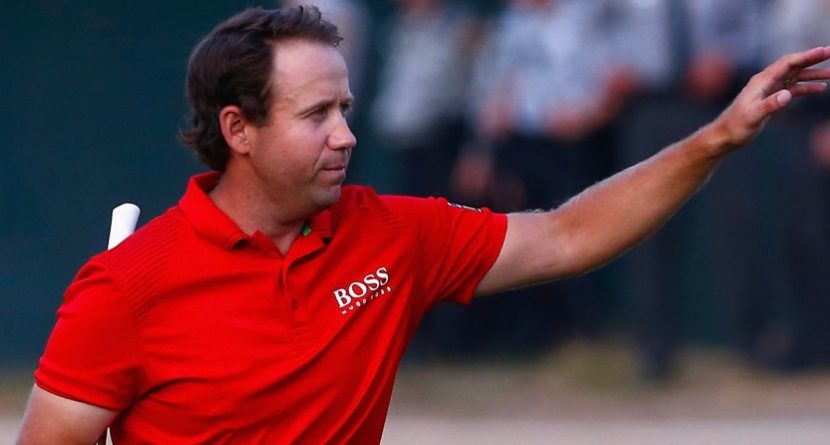 Martin Kaymer dominated the entire field at the 114th U.S. Open at Pinehurst, going 10-under through the first two days, then putting on cruise control over the weekend and finishing with an impressive eight-stroke victory. Such a stud.

Yet as with any major, the victor isn’t the only one who turns in a stellar tournament. And of course, there are also plenty of subpar performances. Here’s a look at the studs and duds from the 2014 U.S. Open, not including the obvious choice of the champion:

Erik Compton: Nothing against Kaymer, but Compton was the man the fans were pulling for. Clearly, “Golfer Wins With Third Heart” would make for a much better headline than “German Dominates America’s Championship.” But the 34-year-old Compton still wrote a nice script. He’s the survivor of two heart transplants, the second of which he drove himself to the hospital for because he remembered what it felt like when his first heart began failing at age 12. He had competed in a major only once before (the 2010 U.S. Open, where he missed the cut), and he’d never finished in the top three of a PGA Tour event. Yet, six years after his second heart transplant, Compton tied for second (-1 overall), earning more money ($789,330) for that one result than he collected in 24 events last year. Of all the Georgia Bulldogs in the field (eight), how many would have picked Compton to play the best? Rickie Fowler: Again, nothing against Kaymer, but if the fans weren’t pulling for Compton, they were cheering for Fowler. His good looks, good attitude and flashy clothes have him as one of the most popular players on tour, and his play at the majors has been spectacular of late. The 25-year-old tied for fifth in April at the Masters, but he recorded a new career-best finish in a major on Sunday, when he tied for second (-1 overall), ending up just one of three players to complete the U.S. Open under par. He played in the final group with Kaymer, giving him a glimpse of what it takes to win one of golf’s major prizes.

Keegan Bradley: Bradley owns a major, picking one up in his first such appearance at the 2011 PGA Championship. But he hasn’t really been a major player at big ones since, other than a T-3 at the 2012 PGA. No more. After placing T-68 and getting cut in his first two U.S. Open starts, Bradley was among five players tying for fourth at 1-over on Sunday. Only Bradley, Kaymer and Brendon Todd carded three sub-70 rounds at Pinehurst; Kaymer won and Todd took himself out of contention with a 79 on Saturday.

Dustin Johnson: Paulina Gretzky’s fiancé entered his seventh U.S. Open appearance ranked 15th in the world and fourth in the FedExCup standings, so a pretty solid position. But you could argue he’d been a three-month slump: He was cut at the Masters, tied for 59th at the Players and was never in contention in his two events leading up to the U.S. Open. Then Johnson tied for fourth Sunday, his best career result at the national championship and best finish at a major since the 2011 Open Championship (T-2).

Cody Gribble: He’s a 23-year-old who made it to the U.S. Open by shooting 7-under at a sectional qualifier in Memphis. He won a Texas high school state championship and helped the University of Texas win the 2012 NCAA title, but he doesn’t have status on the PGA or Web.com Tours. He was ranked 1,557th in the world (which is as low as the rankings go). Yet, Cody Gribble shot 5-over (72-72-72-69) to tie for 21st and collect $98,598. He can say he beat out names like Rory McIlroy, Phil Mickelson, Ernie Els and Sergio Garcia. Adam Scott: The world’s No. 1 player finished tied for ninth at 2-over, so not all that bad. Then again, that was 11 strokes off the lead. Scott was 6-over on Thursday and Saturday, 4-under on Friday and Sunday. And so the winless streak continues at majors for the game’s top-ranked player. The last golfer to win a major while he was ranked No. 1 was Tiger Woods at the 2008 U.S. Open.

Lee Westwood: Though he’d slipped to No. 30 in the world, Westwood had continued to perform fairly well at majors. He missed three cuts in the past 19 majors, but also recorded 12 top-10 results over that span. One of the best players yet to win a major, he was never in contention at Pinehurst, shooting 8-over in two rounds. It’s the first time he’s been cut at the U.S. Open since 2001.

Bubba Watson: By virtue of winning the Masters in April, Watson was the only man who could capture the elusive calendar-year grand slam this year. We didn’t really expect him to take the U.S. Open, but we didn’t really expect the world’s No. 3 golfer to go 6-over in the opening round. He improved to even par Friday, but that wasn’t good enough to get under the cut. In eight U.S. Open appearances, he’s been cut half the time.

Toru Taniguchi: A 46-year-old from Japan, Taniguchi qualified for his ninth U.S. Open. He’d been cut seven previous times, and placed T-63 in the other. So he was thrilled to make the cut a second time on Friday after posting rounds of 72 and 73, 5 over par. Unfortunately, he caught the struggle bus on Saturday, carding an 18-over 88 (the worst round of the tournament). Sunday saw a 6-over 76, giving Taniguchi a final score of 309, 29 over par in 67th place, last among those who made the cut.