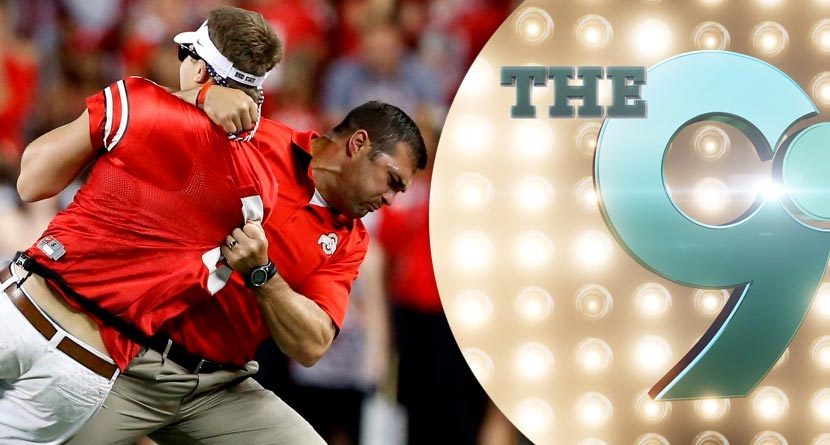 In just his second start on the PGA Tour since a second battle with Leukemia, Jarrod Lyle carded a first-round 66 at the Shriners Hospitals for Children Open on Thursday. Read More

Thank goodness. Earlier this week, we brought you news that Greg Norman may never play golf again due to his injuries from the chainsaw accident he’s been recovering from. Fortunately, doctors have cleared the Shark and we’ll see him in December at his own Franklin Templeton Shootout. Read More

Ian Poulter has been one of the faces of COBRA PUMA Golf for the past eight years, but that’s going to change. Poulter announced on Twitter that he’s parting ways with the brand, and will begin a “very exciting new chapter.” Read More

4. Ohio State Student Will Keep Scholarship After Running Onto Field

Anthony Wunder, the student who ran onto the field at the Ohio State football game, will evidently keep his Evans scholarship. He’ll just have to pay a small fine. Read More On Thursday, Apple unveiled several new products, headlined by the iPad Air 2. The company’s new tablet is the slimmest one yet at just 6.1 mm thin, and it also features the Touch ID home button — the first iPad to have it. Read More

Rather than pulling up to the Volvo Match Play in traditional courtesy car-style, players this week are arriving in choppers. Read More

If you’re looking to play the world’s longest golf course, you won’t find it in the U.S. You’ll have to take a trip to Nullarbor Links in Australia — and don’t expect it to be like any course you’ve ever played before. Read More

With his $12.5 million in career PGA Tour earnings, Masters champion Trevor Immelman bought a home in Orlando on the Lake Nona Golf & Country Club in 2005 for $2.1 million. However, he’s since decided to part ways with the place, listing it for $1.995 million. Read More

The hospitality at the Shriners Hospitals for Children Open features public pools on the grounds of the event — the first of its kind on tour. There are six pools available to fans: two in the Zappos.com Fan Experience area and four on The Hill. Read More