The Greatest Golf Super Bowl Ad of All Time 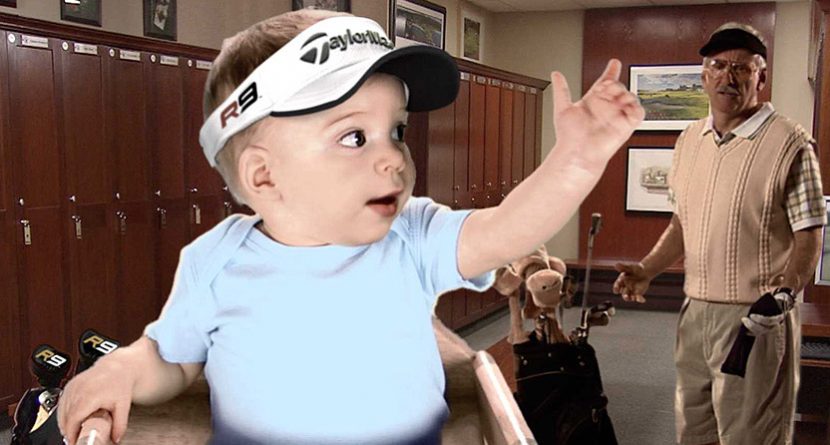 People have a tendency of remembering where they were when some of television’s most historic moments aired live.

The final episode of “M*A*S*H.” When we learned who shot J.R. The first season of “American Idol.” When some weirdo streaked across the Academy Award stage.

And, of course, when we heard “Shankapotomous.”

During the 2009 Super Bowl telecast, the fine folks at E-Trade unveiled their newest commercial featuring the “E-Trade Baby,” the lovable talking toddler who simultaneously gave you a laugh while warming your heart. In this installment, our friend, Nigel, can be seen bragging about a recent round of golf against one of his buddies.

Aww, couldn’t you just pinch him?!

Let’s take a closer look at the commercial that spawned a new golf insult revered around the world.

First, we have the baby’s TaylorMade visor, complete with an “R9” logo embroidered on the side. This is obviously in reference to the driver of the same name, which remains one of TaylorMade’s best-selling clubs of all time. In fact, the SuperTri model of the R9 was the top-selling club in 2010, one year after the commercial’s release.

Next we have Frank, the beaten, downtrodden golfing buddy whose 401K is “tanking.” Frank was not alone in his misery, as we all remember, since 2009 was basically in the middle of the worst economic recession in our nation’s history since the Great Depression. However, the more important question here is why Frank was playing a skins game against a toddler in the first place. Not only that, Frank lost to the toddler (which isn’t surprising since he appears to be using hand-me-down clubs), who proceeded to berate Frank to a national Super Bowl audience. Don’t trust a toddler, folks. They have dark, dark motives and even blacker hearts.

Finally, we have the presumed rules controversy that ultimately cost Frank his match to Baby Nigel. From what we can tell in this 30-second testimonial, Nigel’s ball came to rest on a cart path at a crucial point in the match. Under Rule 24-2b, Nigel was entitled to a free drop – no nearer to the hole – since either his swing or stance was inhibited by the cart path. Frank was obviously unaware of this ruling, hence the pouty attitude.

That doesn’t excuse Nigel from calling his friend a “Shankapotomous.” That’s just mean.