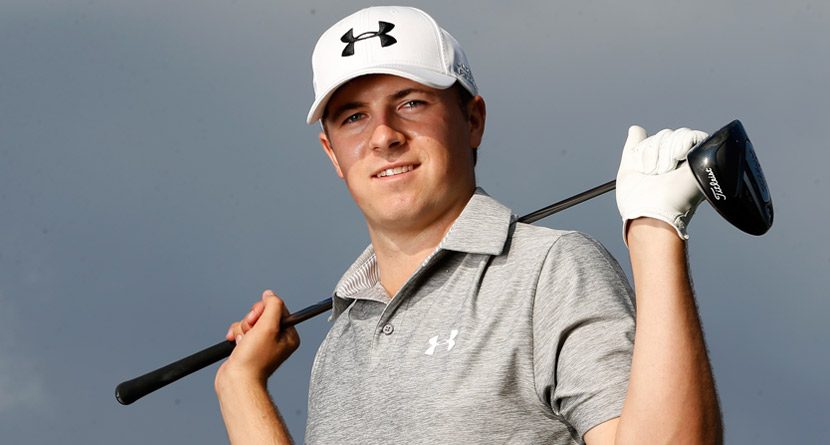 Every player dreams of glory on their sport’s biggest stage. In golf, that is Augusta National and the event is the Masters — so exclusive an event that you must be personally invited by the club to participate, and players long for the opportunity. For those receiving invites, it is some of the best mail they’ll ever receive and one of the happiest days of their lives.

For some, this may be the only time they ever get to experience the drive up Magnolia Lane, stay in the Crow’s Nest, and play on the hallowed grounds of Augusta National. For most, however, it’s the first step, the first chance to fall in love with an event and to experience a tradition unlike any other. Here are the rookies (as of March 10) already invited to participate in the 78th playing of the Masters this April.

Patrick Reed: He won the Wyndham Championship last August to put a cap on his first full year on tour and punch his ticket to Augusta National and the Masters. He has since claimed two more titles on tour, most recently the WGC-Cadillac Championship. While this moment is big for any player, it is especially big for the Augusta State grad, whose parents’ recent Masters tradition has been renting out their house in Augusta for the week. This year, obviously, will be different with their son making his Masters debut.

Graham DeLaet: The Canadian product enjoyed his best year on tour in 2013, scoring three top-three finishes, including two in a row at the Barclays and Deutsche Bank Championship. He also shined in defeat for the world team at the Presidents Cup last fall. DeLaet has been on nearly ever list of players to watch in 2014, as it seems everyone is as excited about his prospects for this season as he is for his Masters debut.

Victor Dubuisson: The 22-year-old Frenchman claimed his first European Tour title late last year at the Turkish Airlines Open and qualified for his first Masters by finishing the 2013 calendar year inside the top-50 in the Official World Golf Rankings (OWGR). Dubuisson notched five more top-10 finishes to go along with that first win and, like DeLaet, found himself on a number of “watch” lists coming into the New Year. His epic runner-up performance at the WGC-Accenture Match Play Championship in February solidified his place as one of golf’s rising stars.

Billy Horschel: Horschel impressed in 2013 and punched his ticket to the Masters by finishing in the top four at the U.S. Open and winning the Zurich Classic of New Orleans. The win at the Zurich was the first of his PGA Tour career and came on the heels of three straight top-10 finishes. Horschel turned heads again at the U.S. Open for more than just his octopus pants on Sunday, as he hit all 18 greens in regulation during one round and finished T-4.

Joost Luiten: Luiten won twice on the European Tour in 2013, helping him earn a spot in the field by finishing 2013 in the top 50 of the OWGR. Luiten doesn’t have much major experience, having played in neither the Masters nor the U.S. Open. He did finish T-21 at the PGA Championship in 2012, but missed the cut last year and finished outside the top 40 in his only two Open Championship appearances. That being said, Luiten seems to be a completely different player since last year, when he picked up his first two wins since 2011.

Brendon de Jonge: The 33-year-old Zimbabwe native qualified for his first Masters Tournament by making it to the season-ending Tour Championship following a career year. De Jonge had four top-10 finishes and despite having never played in a Masters or an Open Championship, he has played well in the five major tournaments he has played in, his best performance a T-26 at the 2011 PGA Championship.

Jordan Spieth: Perhaps no rookie comes in with a better chance to win the Masters than Spieth. The last man to do it was Fuzzy Zoeller in 1979 and before him, Horton Smith and Gene Sarazen — though they did it in the first and second editions of the tournament. Spieth won the John Deere Classic and became the first teenager to win on tour since Ralph Gudahl in 1931. Spieth cleaned up in his rookie year, going from a player with no status to No. 22 in the OWGR at the end of 2013 and claiming PGA Tour Rookie of the Year honors.

Roberto Castro: Like de Jonge, Castro qualified for the Masters by making it to the Tour Championship following a very solid 2013. The Georgia Tech product missed six of his first 10 cuts but rallied late, playing very consistent golf to end the year, narrowly missing his first win at the AT&T National and reeling off a T-25 or better finish in six of his last eight starts.

Chris Kirk: Kirk is a two-time winner on the PGA Tour but will be making his first start in the Masters this year. His first win came in an event that didn’t give out full FedExCup points and thus, did not qualify him for the Masters. His win early in the 2014 season at the McGladrey Classic, however, did. The Georgia native has made four major appearances with a best finish of T-34 at the 2011 PGA Championship.

Harris English: English is now a two-time PGA Tour winner who enjoyed much success in 2013 and has followed that up early in 2014. The talented young Georgia product didn’t play in either the U.S. Open or the Open Championship, and didn’t have a great showing at the PGA Championship last fall, but with such a small sample of major experience, it’s difficult to judge too harshly. English should have a shot a great week in Augusta this spring.

Derek Ernst: Ernst punched his ticket to Augusta last May when he claimed his first, and to date only, PGA Tour title at the Wells Fargo Championship. Despite missing 66 percent of cuts last year, he still finished 74th in the final FedExCup standings. Ernst turned pro in 2012 and graduated from UNLV with a degree in hotel management.

Jonas Blixt: The Swede punched his ticket to Augusta in impressive fashion last year with his win at the Greenbrier Classic. Blixt shot 66-67-67-67 to capture his first title on tour, and ever since has been a solid competitor week after week. Blixt also finished fourth at last year’s PGA Championship.

Jimmy Walker: There has been no hotter player on the PGA tour in 2014 than Jimmy Walker. He punched his ticket to Augusta by winning the Frys.com Open and since then, he’s also added the Sony Open in Hawaii and the AT&T Pebble Beach Pro-am, giving him three wins in only eight starts — a feat only matched by Phil Mickelson, Tiger Woods and David Duval in the modern era.

Kevin Stadler: The “Smallrus,” as he has come to be known, won the Waste Management Phoenix Open this year, besting 2012 Masters champ Bubba Watson by one stroke to claim his first career win and a spot in this year’s Masters. While Stadler will be making his first start in the prestigious event, his father, Craig, the 1982 Masters champion, will be making his last. It will mark the first time a father and son have competed in the same Masters Tournament.

Matt Every: Every collected his first career PGA Tour victory at the Arnold Palmer Invitational at Bay Hill in March to claim a spot in the field at the 2014 Masters Tournament. Every has been on tour since 2010 and is a former contestant on “The Big Break.” As an amateur in 2005, Every finished T-28 in the U.S. Open at Pinehurst, which still stands as his best career finish in a major.

Steven Bowditch: With just one week to spare, Steven Bowditch punched his ticket to Augusta by picking up his first career PGA Tour victory at the Valero Texas Open. Bowditch will be making only his second ever major appearance this April at the Masters. The Aussie’s only previous experience on the big stage came last year in Scotland when he missed the cut at the Open Championship.

Matt Jones: On the final Sunday before the Masters, Australian native Matt Jones collected his first PGA Tour win in dramatic fashion. Jones buried a 46-foot birdie putt on 18 in regulation to force a playoff with Matt Kuchar, then holed out for birdie on the first sudden-death playoff hole. The 33-year-old’s best finish in a major came at last year’s PGA Championship when he finished T-40.

Jordan Niebrugge: The Oklahoma State sophomore earned his spot in this year’s field by winning the U.S. Amateur Public Links in 2013, defeating fellow Masters rookie Garrick Porteous 1-up. Niebrugge is also an established star at OSU and has put together a stellar amateur career to this point.

Lee Chang-woo: Chang-woo made his dreams come true by winning the Asia-Pacific Amateur Championship last year, besting last year’s champ, Guan Tianlang, by eight strokes. Along with his win in the APAC, Chang-woo tied for second with Rory McIlroy at the 2013 Korean Open.

Michael McCoy: At 50 years young, McCoy will realize the lifelong dream of playing at Augusta thanks to his 8 & 6 win over Bill Williamson in the 2013 U.S. Mid-Amateur Championship. McCoy has also made appearances at the U.S. Senior Open and the U.S. Amateur Championship.

Garrick Porteous: Porteous received an invite to the Masters thanks to his win in the British Amateur Championship last year. Porteous graduated from Tennessee in 2012 with a bachelor’s degree in art, and along with his obviously-budding golf career, is an artist and photographer. Matthew Fitzpatrick: The Northwestern product spent 21 weeks atop the World Amateur Golf Rankings following his win in the 2013 U.S. Amateur. The win also earned him a spot in this year’s Masters, as well as the Open Championship and the U.S. Open if he remains an amateur.

Oliver Goss: The Australian punched his ticket to the Masters by finishing runner-up to Fitzpatrick at the 2013 U.S. Amateur. Goss also played well in the Asia-Pacific Amateur Championship, just missing victory there as well. Goss is currently a sophomore at the University of Tennessee.

With one more benchmark date on the horizon for Masters qualification, the list of rookies could increase. Players winning one of the remaining full FedExCup points-paying events or reaching the top 50 in the Official World Golf Rankings by March 31 will also qualify for the 2014 Masters Tournament.