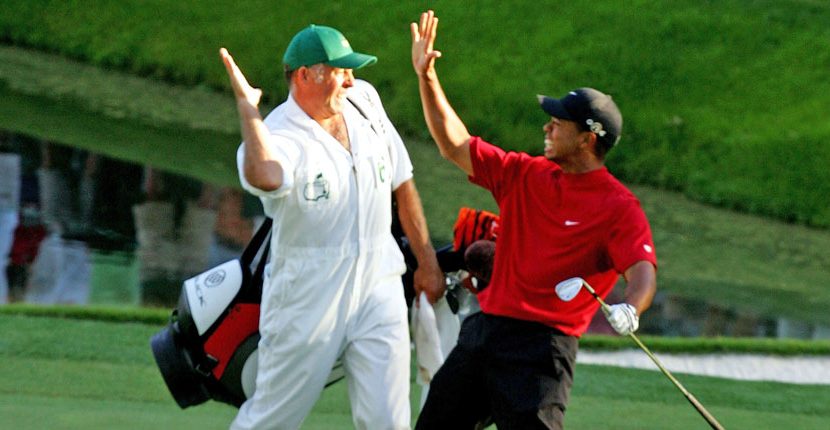 If you want to win the most coveted article of clothing in professional sports, you’re going to need to hit some great shots along the way. The Masters is notorious for giving fans electrifying finishes and golf shots that live in our minds forever. Here are the top 9 shots in Masters history:

Louis Oosthuizen’s Albatross – 2012 Masters: Usually, it’s inevitable that people will forget who finished second; doesn’t matter which event or where. Or one way to be remembered for finishing second is to collapse, crash and burn (a la Jean Van de Velde). Not so, however, for 2012 Masters runner-up Louis Oosthuizen. Early on Sunday, Oosthuizen secured his place in history when he buried his second shot on the par-5 third hole for the rarely seen albatross. I have to tell you, I watched this live and to this day, it gives me goose bumps.

Bubba Watson From the Trees – 2012 Masters: For about three and a half hours, Oosthuizen’s double-eagle was the runaway favorite for shot of the tournament. It still came in a close second, but the ridiculousness that was Bubba Watson’s save from the pine straw right of the 10th fairway during the sudden-death playoff was nothing short of divine. I’m sure you’ve seen replays of the shot (unless you live under a rock) as it has made nearly every “top-whatever” countdown since 2012. Watson saved par, Oosthuizen didn’t, and the rest, as they say, is history.

Tiger Woods Chip-In – 2005 Masters: Webster’s defines drama as, “a situation or sequence of events that is highly emotional, tragic, or turbulent.” If you’re looking for the illustration of it, it’s this shot by Tiger Woods at the 2005 Masters. With the tournament coming to an end and Chris DiMarco battling tooth and nail, Tiger Woods hit one of the most memorable golf shots not only of the tournament, but ever. If you can watch this without getting shivers, you’re probably dead.

Phil Mickelson From the Pine Straw – 2010 Masters: For a guy who has built a career and legacy on “going for it,” it was no surprise when Phil Mickelson decided to go for broke on the par-5 13th on Sunday at the 2010 Masters. Mickelson famously split two trees from the pine straw right of the fairway and stuck his approach to makeable eagle range. For the week, Mickelson played the 13th hole — just the 13th hole — at 6-under-par.

Vijay Singh’s Skipping Ace – 2009 Masters: Alright, I know this didn’t happen in actual tournament play but it’s too impressive to leave off the list. Most people will never make a hole-in-one in their lives; Vijay Singh made one, for all intents and purposes, screwing around in a practice round. Never in his life (during a competitive round) would he try this shot but, alas, he’s got a hole-in-one doing it here. All this does is further illustrate the gap in ability between “us” and “them.”

Larry Mize Chips-In for Victory– 1987 Masters: Greg Norman’s heartbreak in major tournaments, especially the Masters, is well-documented and over the years he has had many foils to his pursuit of glory. This time, Augusta native Larry Mize stole the spotlight and seemingly took the green jacket off Norman’s back when he holed his miraculous third shot on the 11th during the second hole of a sudden-death playoff. For Mize, it was his only major triumph and for Norman, the fifth consecutive major he led on Sunday and the second consecutive major in which Norman was beaten by a chip-in birdie.

Sandy Lyle’s Bunker Shot – 1988 Masters: From 1986 to 1988, the Masters enjoyed three of the craziest, greatest endings in the event’s history. Lyle capped that streak with the second major title of his career. Lyle hit his tee shot into a fairway bunker on 18, then made one of the most remarkable up-and-downs in Masters history to claim his green jacket over Mark Calcavecchia.

Jack Nicklaus at 16– 1975 & 1986 Masters: Nobody owns Augusta National like Jack. Of Nicklaus’ 18 major championship victories, one third of them have come in the Masters. Of his six triumphs, perhaps his greatest were his last two. First, in 1975, he holed a monster putt on 16 to take the lead and hold off Johnny Miller and Tom Weiskopf…

…then in 1986, Nicklaus re-wrote the record books, winning the Masters in dramatic fashion with a back-nine 30, defeating Greg Norman, Seve Ballesteros and Tom Kite.

Gene Sarazen’s Double Eagle – 1935 Masters: Gene Sarazen hit arguably the greatest shot in golf history at Augusta in the second playing of the Masters in 1935. Of course, there is more to the story than just his double-eagle on the 15th hole. The shot gave credibility to the Masters before it was a major and when it was a fledgling tournament struggling to survive. Without it, it’s hard to say whether the Masters would have ever blossomed into the tournament that it is.