The Return of Rory McIlroy 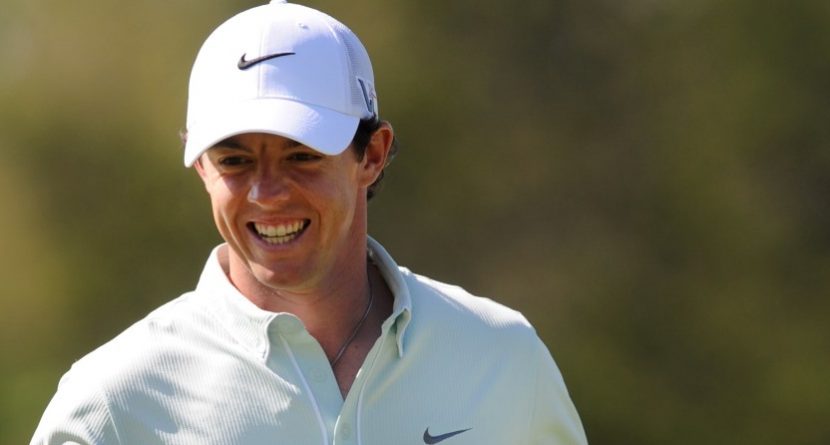 The only thing that can defeat talent is time or more talent. Fortunately for Rory McIlroy, he has plenty of time and no one has more talent. He is clearly motivated, and according to his good friend, Graeme McDowell, he is back on form. Rory is in the midst of closing out the worst year of his career, but he is trying to end things on a high note.

Related: Rory McIlroy Says Brandel Chamblee ‘Should Be Dealt With’

The calendar tells us that we have six months before the next major championship and Rory is already showing signs of turning things around. It has been nearly a year since he won a tournament on any tour. Next month he will defend his World Tour Championship in Dubai, where he won last year to secure his place atop the European Tour money list. That is, of course, if he makes it to Dubai. Only the top 60 in the Race to Dubai make the final event. Rory enters this week’s WGC-HSBC Champions in Shanghai ranked 62nd in the chase.

In China, Rory said that he felt like there was a better chance that he would win than miss the final event. That is the kind of attitude we have come to know and expect from the former No. 1 player in the world. Whether or not he is all the way over the hump and back on form remains to be seen. Either way, when we look back at 2013, we might just realize that this was the most important year of Rory’s career. Every great player goes through some lulls in their career, and they are brought on for a variety of reasons. We all know about the downfall of Tiger Woods, brought on by personal turmoil and injury in the last half decade. But what most people forget is that Tiger did not win a stroke-play event from October 2003 to January 2005. He did win the 2004 Accenture Match Play and his own event in December, but other than that, Tiger couldn’t find his way to the winner’s circle. OK, this isn’t a very fair comparison; Tiger did have 14 top 10’s in 19 starts. But Vijay Singh won nine times that year and took over the top spot in the world.

By Tiger standards, that was a low point. I remember interviewing Tiger at the Deutsche Bank Championship, when it was certain that Vijay would take over as the world’s No. 1 player, and Tiger was not happy. At that moment, perhaps for the first time in Tiger’s life, there was someone better than him.

For a healthy Tiger, that hasn’t happened often. But a couple of years ago it happened again. In 2012, Rory won the Honda Classic and claimed the top spot in the world. Although others like Martin Kaymer and Luke Donald had ascended to that spot in Tiger’s absence, Rory was the first who looked as if he could dominate any field at any time. Later in 2012, Rory won his second major, the PGA Championship, by eight shots and went on to win two events in the FedExCup playoffs. To be clear on Rory’s “slump,” he did make nearly 2 million dollars in 16 starts on the PGA Tour this year. He had 5 top-10 finishes and made the cut in three of the four majors. For someone other than Rory, that is a pretty good year. But his expectations, and the expectations hoist upon him, are far higher.

A year ago, Rory was unveiled as Nike’s latest high-paid ambassador. With that comes a tremendous amount of pressure. Over the course of the next several months, Rory left his management company and formed his own. He then sued and was counter-sued over fees. (That process is ongoing.) If you believe the rumors, his personal life was in turmoil as well. All of those factors create distraction. In professional golf, distractions affect confidence. David Duval once said, “A golfer needs to protect his confidence at all cost.” Once you lose confidence, you will stop at nothing to regain it and very often head down the wrong path.

The truth is that Rory likely could have made the transition to Nike seamlessly if that was his only hurdle. He probably could have handled the management issues and the personal issues individually without it creeping onto the golf course. But add all of those together and Rory was, in his own words, “lost on the golf course.” And that is part of being an adult, not just a golfer – it is never just one thing. The world doesn’t work that way.

From the equipment side of things, Rory is now playing the newest Nike golf ball and proclaimed it the “best ball I have ever played.” His management team, led by his father, should be handling all legal matters and keeping Rory as far from them as possible. At one point during the summer, Rory said that he would have liked to have added an event but he couldn’t fit it into his schedule. That kind of thing can’t happen and probably precipitated the change. As for his personal life, he is the kind of guy that you want your daughter to date. That should work itself out.

This week Rory will tee it up against the best players in the world in the final WGC event of the year. He says that his short game is back and that his ball-striking is as good as ever. Mechanically, Rory has never been far off. From a talent perspective, he is very nearly unparalleled. And the truth is that Rory is great for the game. The one thing we know about Rory is that he knows how to win. He has been doing it all his life.

If he can apply the lessons that only come from defeat, the end of 2013 could be a new beginning for Rory.