The Top Golf Courses President Obama Has Played During His Administration 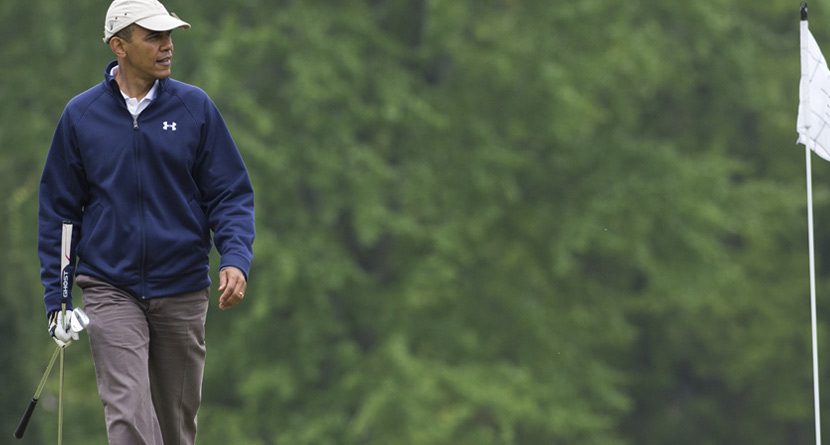 Golf has been quite the subplot in the narrative that has been Barack Obama’s presidency. Whether you fall on the right, left or even somewhere in the middle, you can’t deny that No. 44 loves the game.

You could say, he lives the golf lifestyle — and for that, we salute him.

Obama took to the golf course in Hawaii this past weekend as the First Family began its holiday vacation. It’s the family’s sixth vacation to Hawaii during Obama’s administration and you can bet POTUS knows the best places to play golf on the island.

This, of course, got us thinking. He’s played golf quite a bit over the last six years and done so at some prestigious courses. But which courses are the best? Here’s our somewhat unofficial ranking of courses played by Obama since he was elected to the highest office in 2008:

Farm Neck
This prestigious private club just off the tip of Cape Cod, Mass. on Martha’s Vineyard is a favorite of Obama. The family usually spends its summer vacation on the island and Obama uses his political pull to get towards the top of the tee sheet. Last summer, POTUS played the Neck alongside Ray Allen and Back9Network executive producer Ahmad Rashad.

Shadow Creek
Obama recently played this Las Vegas desert oasis alongside New York Yankees legend Derek Jeter. Shadow Creek, of course, is the exclusive track crafted out of the desert by Tom Fazio and casino magnate Steve Wynn. It’s now owned by MGM and in order to land a tee time, you’ll have to be a guest at an MGM hotel and then pay the $500 fee that includes a limousine transport to the course. The course hosted Michael Jordan’s Celebrity Classic earlier this year.

Congressional Country Club
Perhaps the finest golf destination near his D.C. address, Congressional has hosted three U.S. Opens and a PGA Championship and, of course, was the place one weekend golfer found one of Obama’s personalized Titleist Pro V1s.

Obama played at Congressional yesterday, and I just found this in the woods off one. Looks like he’s off line again. 44th.

The Floridian
Sure, The Floridian is exclusive but this course was a part of this list because of the person Obama teed it up with when he played there: Tiger Woods. POTUS and Tiger hit the exclusive Palm City, Fla. track in 2013 and it was reported that Obama even received some instruction while playing again with Butch Harmon, Woods’ former swing coach.

TPC Potomac
Another great course not too far from the White House, TPC Potomac hosted Obama and ESPN’s Michael Wilbon earlier this year.