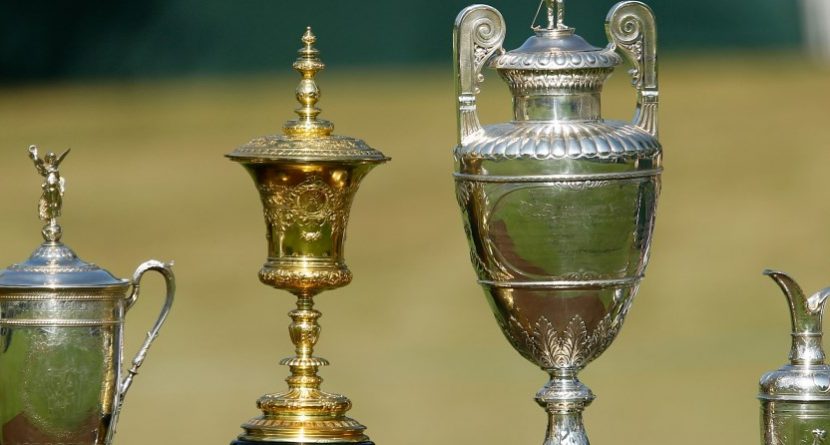 The Grand Slam in golf is the ultimate accomplishment. Numerous players have captured one major, dozens have collected two. Forty-three men have won three majors, and of those golfers, 27 have earned at least four.

Yet only one man has triumphed in each of the four majors in one season: Bobby Jones in 1930.

And now, the United States Amateur Championship trophy which capped that unprecedented feat is gone. According to the New York Times, Jones’ prize and numerous other extremely valuable memorabilia in New York and New Jersey have been stolen, likely for the gold they contained. That leads the authorities to believe the items have since been melted. (In the above photo of Jones’ Grand Slam trophies, the U.S. Amateur is the gold one.)

FBI agents and police officers think the same suspect – who’s been seen via surveillance video breaking glass and doors wearing ninja gear – is responsible for all the recent heists. In the past 18 months, the thief has taken nearly $1 million worth of possessions belonging to three museums and a country club in New York and New Jersey.

Among the other items missing: the 1903 Belmont Stakes trophy, a silver Fabergé soup tureen and ladle given by Czar Nicholas II of Russia to an American harness horse owner, and a replica of Ben Hogan’s Hickok Belt, which featured a solid gold buckle and an encrusted four-carat diamond.

The golf items were stolen from the United States Golf Association Museum in Bernards Township, N.J., and the horse racing treasures were lifted from either the National Museum of Racing and Hall of Fame in Saratoga Springs, N.Y., or the Harness Racing Museum and Hall of Fame in Goshen, N.Y. The rampage began in May 2012 at the Somerset Hills Country Club in Bernardsville, N.J.

All the pilfered items contain gold, which appears to be what the thief was after considering they passed over many silver trophies at the places they hit. The Times reports that gold prices in the past year have reached $1,700 per ounce, while silver is worth $30.

Rewards for information on the case can reach $35,000, but the case appears to be far from solved.

Related Links: Back9 Style – Get The Bobby Jones Look