This Wounded Veteran REALLY Wants To Be Adam Scott’s Caddie 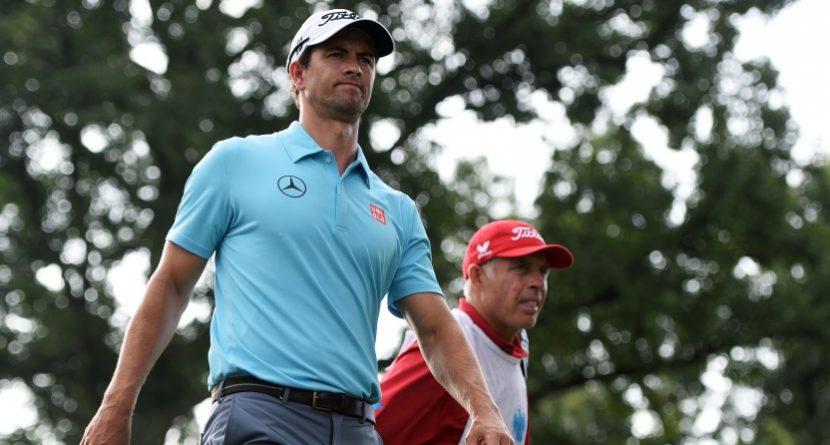 As you’ve probably heard, Adam Scott is looking for a new caddie. The legendary Steve Williams wanted to take a break from looping, so the world’s No. 2 player is left seeking a bag man. Not surprisingly, he’s received hundreds of offers.

Well, we may have found the guy who wants the job the most. He won’t be the most qualified caddie applying for the gig, but he’s probably the only one who will tweet at literally hundreds of people (golfers, brands, media members) asking for their help.

Tim Gaestel is a 31-year-old former Army soldier. He was hit with shrapnel in Baghdad and released from the Army in 2005. Since, he has picked up the game of golf – which he says saved his life – and he is now an assistant high school golf coach in San Angelo, Texas. For the past two years, he has also been a caddie. And according to the blog he set up for this mission – adamscottsnewcaddie.blogspot.com – Gaestel has caddied for more than 20 people in tournament golf. He realizes that might not be quite enough experience for a man who spent time as the world’s top-ranked golfer this year, but Gaestel is not deterred.

“My lack of experience actually caddying on tour is nothing to worry about because my passion for the game of golf and golf education will keep me among the best caddies on tour,” he wrote. “I have many situations that required me to learn quickly and on the job, Army, Teacher, and Coach.”

Even if it’s just for one tournament, Gaestel is confident he can prove his worth to Scott.

“Golf saved my life and it is in this opportunity that I try and get Adam Scott to hear my request and hopefully give me a chance to be on his bag! Maybe even just one time, one day, and prove I can handle it. It couldn’t hurt and I promise that his willingness to help a Wounded Veteran would always be a great story that would show his compassion!” Gaestel wrote.

To get this story out there, Gaestel has been spending his Friday relentlessly tweeting at influential people of all kinds with the hashtag #Gaestel4AdamsCaddie and a link to his blog.

@McIlroyRory Wounded Vet trying to be Adam Scott’s next Caddie! Thx for your support! …http://t.co/jbSP3R5aFK #Gaestel4AdamsCaddie

@TigerWoods Wounded Vet trying to be Adam Scott’s next Caddie! Thx for your support! …http://t.co/jbSP3R5aFK #Gaestel4AdamsCaddie

@AhmadRashadB9N Wounded Vet trying to be Adam Scott’s next Caddie! Thanks for your support! …http://t.co/aDLHzNoMFc #Gaestel4AdamsCaddie

Unfortunately, the man whose favor he’s seeking isn’t on Twitter. Scott is one of the few golfers yet to take up social media. But Gaestel has sent messages to loads of professional golfers, many of whom are in Shanghai this week with Scott for the World Golf Championships-HSBC Champions.

Surely it’s only a matter of time before Scott hears about this passionate plea from a U.S. Army veteran, if he hasn’t already.

Related Link: Adam Scott’s Next Caddie Could Be You