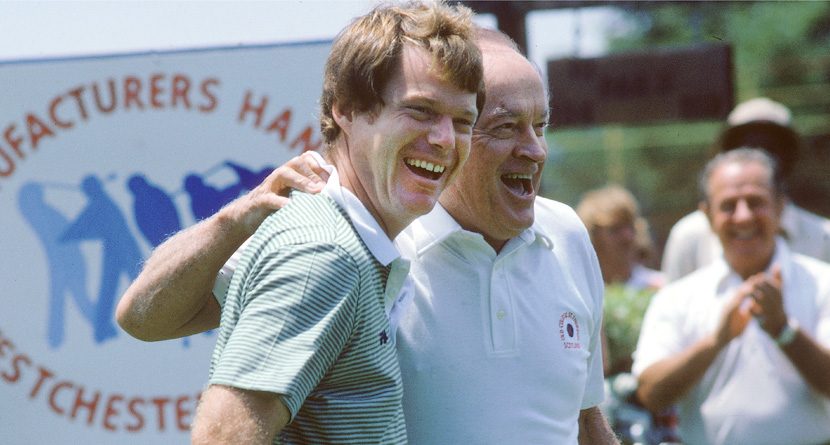 Starting in 1960 with a staggering 22-stroke victory by Arnold Palmer, and continuing through this year’s event, the Bob Hope Classic in Palm Springs, Calif., is a PGA Tour tradition. Known until 1965 as the Palm Springs Golf Classic, and now officially known as the Humana Challenge, the Bob Hope Classic is an annual opportunity for players and celebrities to hit the links for good fun, great golf, and to bring about change in the community through numerous charitable endeavors.

Even before Bob Hope joined the tournament’s board and gave his name to the event in 1965, the Classic drew a large number of celebrities. Bing Crosby, Desi Arnaz, Kirk Douglas and Burt Lancaster were among the first group of Hollywood stars to flock to the pro-am portion of the event, laying the foundation for the next 50-plus years of celebrity participation.

Photo Gallery: A Look Back at the Star-Studded Bob Hope Classic “I had the best time,” Rashad said. “Joe was a great partner and a lot of fun to play with.”

For many celebrities, the chance to play alongside the best in the game is the draw. Rashad said he once played with someone who, Tiger Woods once told him, “has more natural talent than anyone he’s ever seen.” That would be the man they called “Wild Thing.”

“The highlight was playing with John Daly,” Rashad said. “He’s such a big sports fan, it was great.”

Along with the athletes, musicians, actors and actresses to take part in the pro-am, former presidents also seem to enjoy the festivities. Dwight Eisenhower, Gerald Ford, George H.W. Bush and Bill Clinton have all teed it up in the Bob Hope Classic. And the Clinton Foundation has played an especially large role in the history of the tournament, teaming with Humana as the title sponsor of the event since 2012. Coupled with the celebrities, the Classic also changed the game by offering a staggering (at the time) $50,000 for a hole-in-one, a prize that was claimed three times in the early years of the tournament. For a comparison, Palmer collected a total of $75,000 for his eight wins during the 1960 season.

According to the event’s website, the Classic “has contributed more than $52.5 million to the Eisenhower Medical Center and surrounding Coachella Valley nonprofit organizations.” Currently the Clinton Foundation uses its participation at the Humana Challenge to continue its work “to improve global health and wellness, increase opportunity for women and girls, reduce childhood obesity, create economic opportunity and growth, and help communities address the effects of climate change.”

The two most exciting finishes came in 1991 and 1999. In ’91, Corey Pavin holed out on the first hole of sudden-death to finish off Mark O’Meara. And in ’99, in perhaps the marquee moment in the tournament’s history, former world No. 1 David Duval shot a final-round 59 to beat Steve Pate by a single stroke. It was the first time a player shot 59 in the final round of a tournament (only Stuart Appleby at the 2010 Greenbrier Classic has done it since).

Palmer dominated the event from its inception. He won five times and was one of a number of great players through the years to have wild success at the Bob Hope Classic. Players like Larry Miller, Phil Mickelson, Fred Couples, Jack Nicklaus and Billy Casper have put their name on the trophy in Palm Springs. Bob Hope passed away in 2003 at the age of 100, but his legacy lives on. Few tournaments have done more for the communities they represent than the Bob Hope Classic, and few events without the distinction of being a major have had the same place in the game. No matter the official title of the tournament, it will always be remembered as the Bob Hope Classic.