Tiger vs. Rory: The Match at Mission Hills Live Blog 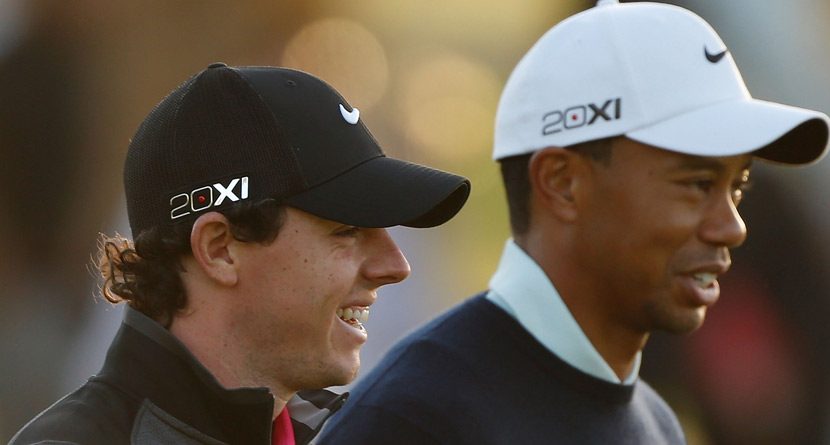 Thanks for joining Back9Network’s live coverage of “The Match at Missions Hills” as Tiger Woods faces off with Rory McIlroy live from China.

To read the blog in chronological order, start at the bottom and work your way up.

Hole 9 Recap: Off an elevated tee, McIlroy puts one to the right of the wide fairway. Woods’ drive goes to the left, saying, “I was bound and determined to draw that one” because he’s experimenting with a new ball. After arriving at his ball, Tiger is greeted by Rashad, who suggests an 8-iron. When Woods sticks it five feet from the hole, Woods tells Rashad he’s a heck of a caddie. “Joey, you’re done,” Woods jokes. From the other side of the fairway, McIlroy is spot on too, but his ball stops about five feet behind Woods’. McIlroy pushes the birdie putt long and takes par, while Woods drops the birdie putt to go back to 1-under. Through nine holes, Woods shoots 35 and McIlroy 36.

2:26 AM ET: Tiger Woods makes birdie and is 1-under. Rory McIlroy has to settle for another par and remains even. 2:23 AM ET: Ahmad tells Tiger he’s playing the winner when they get back to Florida. He then helps Tiger choose his club. Tiger Woods hits a great second shot and has a good look at birdie. Rory McIlroy finds the green as well and will be looking at a birdie opportunity as well 2:19 AM ET: Rory McIlroy finds the fairway on the par-4 9th hole. Tiger Woods hits his left and just misses the fairway. Hole 8 Recap: Woods’ drive on the par-3 flies right and barely misses a bunker, but it sits in thick rough. McIlroy’s drive stops on the back of the green. Woods chips out nicely, leaving about seven feet to the cup. McIlroy’s birdie putt drifts left, and Woods’ par putt misses just right. McIlroy makes par to Woods’ bogey, so the guys are even again.

2:14 AM ET: Rory McIlroy misses his birdie putt, has a good look at par coming back. Tiger Woods just misses his par to the right and settles for bogey. Rory McIlroy makes par. We’re all even again.

2:12 AM ET: Tiger Woods hits a beautiful shot from the back of the green and is looking at par. 2:09 AM ET: Tiger Woods finds himself way over the green and will look at a tough up and down. Rory McIlroy finds the green. Will be looking at birdie. Hole 7 Analysis: Both guys send their drives down the middle of the fairway, nearly identical shots. Woods’ approach goes right at the pin, but lands in front and rolls back. McIlroy’s approach sails over. Seeing that McIlroy is facing a steep downhill putt, Woods asks if he should lay his putter down to stop the roll. It would have helped, because McIlroy’s putt falls all the way down next to Woods’ ball. Woods’ uphill putt misses a foot right, but he taps in for par. McIlroy’s par putt misses, so he drops another shot. Woods holds a one-shot lead.

2:06 AM ET: Tiger Woods makes par and remains at 1-under. Rory McIlroy misses his par and makes bogey.

2:04 AM ET: Rory McIlroy is just off the green, to the right. Tiger Woods off to the green as well on the left side. Hole 6 Analysis: Woods shanks his drive, dropping his club in disgust after his follow-through. McIlroy stripes his drive down the center. Woods takes a provisional drive, but promptly sends it into a bunker. After discussing their different Nike drivers, Woods plays his first drive, which he just chips out into the fairway. His approach sails wide left and short, followed my McIlroy sending his second shot over the flag to the back of the green. He then chats up LaCava, a New York Giants fan, about football. LaCava thinks the Seahawks are the real deal. Woods’ fourth shot, a chip, also flies over the pin. McIlroy leaves his eagle putt short and Woods’ par putt drifts left, so he settles for bogey and drops to 1-under overall. McIlroy quickly sinks the birdie putt, and just like that, they’re even again. 1:54 AM ET: Rory McIlroy hits a beautiful second shot and is safely on the green. Tiger Woods’ 3rd shot is on the green. Looking at birdie.

1:48 AM ET: Tiger Woods finds his tee shot, punches out. Tiger Woods tries to play a cut-shot, not happy but is safe. 1:47 AM ET: “Nike’s Cobra 2.0 is a great addition, more forgiving, a little big of a bigger head. I feel like if i hit it a little off the heel or off the toe, the mishits are going a lot straighter and still going far.” – Rory talking about how he’s using a new Nike club due to hit the market next year.

1:45 AM ET: Tiger Woods finds his tee shot way right. Is now hitting a provisional. Rory McIlroy hits his shot in the rough, but has an advantage on Tiger. Hole 5 Analysis: Woods’ drive on the par-3 sticks on the front of the green, while McIlroy’s sails deep and left of the green. Before hitting his putt, Woods asks LaCava for a cough drop. He’s battling a cold he said he picked up from his kids; they were able to get over it much quicker, though. His putt comes up five feet short. McIlroy’s chip rolls past the cup, and his par putt lips out. He rushes another putt, which lips out too, quickly giving him a double bogey. Woods makes par, but heads to the sixth with a two-stroke lead. 1:38 AM ET: Tiger Woods goes finds the green on the par-3 5th hole. Rory McIlroy puts a little too much on it and misses the green to the left. Hole 4 Analysis: Both drives find the fairway, and Woods’ approach finds the green, helped nicely by a hill that rolls it back toward the cup. McIlroy’s approach comes up short, but on the green. “Rory, how are you feeling about your game right now?” Rashad asks. “I feel good… I’m confident, I feel like I’m in control of the golf ball,” McIlroy says, before sending a birdie putt three feet wide. Woods responds by nailing his birdie putt to move to 2-under. McIlroy saves par, and the two are even.

1:34 AM ET: Rory McIlroy misses his birdie putt. Tiger Woods makes another birdie and that moves him to 2-under. 1:30 AM ET: Tiger Woods hits a beautiful shot which finds the slope and rolls back towards the hole. Rory McIlroy finds the green as well. Both have a good look at birdie. 1:29 AM ET: Tiger tells Ahmad that his strategy was to have Rory go first so he can watch him play the course.

1:25 AM ET: Tiger hits a beautiful tee shot and finds the fairway. Rory McIlroy is just off the fairway in the second cut.

Hole 3 Analysis: McIlroy, with the honors, sends his drive left but thankfully misses some bunkers. Woods’ shot sails right down the middle. While walking to their balls, they’re joined by Ahmad Rashad, who asks Woods, “Are you a bit rusty?” “Big time,” Woods replies. “I don’t have a good feeling for where this is going.” But then McIlroy slices his second shot, saying, “Oh no,” right after he hits it. Woods sticks his approach 20 feet left of the pin, then nails the birdie putt. Just prior to that, McIlroy’s chip stops a foot away for a tap-in par. McIlroy is 2-under, Woods 1-under.

1:21 AM ET: Rory McIlroy hits a beautiful third shot, nearly holes it and settles for par. Tiger Woods gains one on Rory McIlroy with a birdie. 1:19 AM ET: Tiger and Rory take a few minutes to chat with Back9’s Ahmad Rashad. Tiger can be heard telling Ahmad that he’s caught a cold from his kids. 1:17 AM ET: Rory McIlroy pulls his second shot, finds himself to the left of the green. Tiger Woods finds the green. Has a good look at birdie.

1:14 AM ET: Rory McIlroy finds the left side of the fairway.Tiger Woods hits his tee shot right down the middle. Hole 2 Recap: Both players’ drives find the fairway, but Woods sends a 3-wood shot wayward again. McIlroy, meanwhile, is spot on again, and his second shot finds the green. Woods’ chip rolls onto the front of the green, then he watches McIlroy’s eagle putt rolls six inches past. Woods’ birdie putt misses by an inch again, and McIlroy’s easy birdie putt drops to put him 2-under through two holes.

1:09 AM ET: Tiger Woods misses his birdie putt, has to settle for another par. 1:07 AM ET: Tiger Woods hits a beautiful third shot and has a great look at birdie. Rory misses his eagle putt, has a nice look at birdie coming back.

1:04 AM ET: Tiger Woods pulls his second shot to the left with a 3 wood. Rory McIlroy finds the middle of green. Hole 1 Analysis: After sailing his drive way left, Woods tells McIlroy he hasn’t touched a club until today, aside from shooting a Nike commercial, since the Presidents Cup. The poor drive prompts Woods to ask his caddie, Joe LaCava, “Is that in the lava?” But Woods recovers nicely and his second shot lands on the green, just way right. McIlroy, from the center of the fairway, hits his approach to the left side of the green. After Woods’ lengthy birdie putt comes up inches short, McIlroy sinks his.

12:55 AM ET: Tiger just missed his birdie putt. Makes par. Rory McIlroy finds the bottom of the cup for birdie and is now 1-under. 12:45 AM ET: Rory will be teeing off first and stripes his down the middle. 12:40 AM ET: Tiger and Rory are headed to the 1st Tee after taking part in the Opening Ceremony.

12:30 PM ET: We have live video feed for anyone outside of the United States that is up now.

12:28 AM ET: Tiger Woods and Rory McIlroy pose for a photo in front of a solar-powered golf cart on October 28, 2013 at Mission Hills Golf Club in Haikou, China. (Photo by Victor Fraile / The Power of Sport Images) 12:24 AM ET: Tiger Woods and Rory McIlroy put on a clinic for fans during on the Blackstone Course on October 28, 2013 at Mission Hills Golf Club in Haikou, China. (Photo by Victor Fraile / The Power of Sport Images) 12:09 AM ET: Tiger and Rory will be teeing off at 12:30 AM ET. Live video will begin at that time for the audience outside of the United States.

12:06 AM ET: Before Tiger Woods and Rory McIlroy attempt to beat each other in The Match at Mission Hills, they will first try to fend off 14-year-old Tianlang Guan in a skills challenge.

12:oo AM ET: Back9’s Executive Producer Ahmad Rashad is on the course with Tiger and Rory and will be providing commentary throughout the event on the world-wide broadcast. He doesn’t think either player will be pulling any punches just because this is an exhibition.

11:45 PM ET: Tiger and Rory will be playing on the beautiful Blackstone Course. The crown jewel of the Mission Hills Golf Club, a spectacular 350 acre core golf course that weaves through a striking landscape of mature trees, thick jungle vegetation, and expansive lakes and wetlands. The dominating site characteristic is the bed of lava rock which was capped with material located 25 miles away. 11:30 PM ET: Be sure to check out this video of the amazing Mission Hills resort in China.

11:25 PM ET: In case you missed it, Tiger and Rory arrived at Mission Hills earlier today to much fanfare.