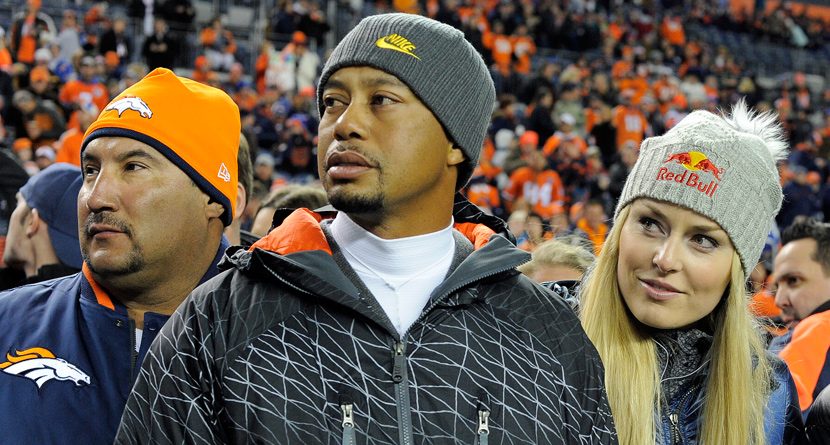 Despite recent rumors of trouble in paradise for Tiger Woods and Lindsey Vonn, the couple seems to be doing just fine in these photos from the Kansas City Chiefs-Denver Broncos game Sunday night.

While Vonn is in Colorado training for her return to Olympic competition in Sochi following surgery for a torn ACL, her beau has been spotted with her on the slopes and now, on the sideline, watching her Broncos at Sports Authority Field at Mile High. National Enquirer has had reports of the pair having “nasty” arguments over Tiger skipping the Winter Olympics to play in the Accenture World Match Play Championship in Arizona the same week in February that Vonn will be taking to the slopes. According to a report on FoxSports.com, “Lindsey told Tiger: ‘I supported you this season. Now, it’s your turn to support me in public. I’m not just your cheerleader — I’m a world-class athlete too!'” It certainly looks like the two are living in unwedded bliss for the time being. February is a long way away and only time will tell if Tiger will return the favor and cheer on Lindsey in her return to Olympic competition. Until then, we can look forward to more moments like this from these two adorable love birds.