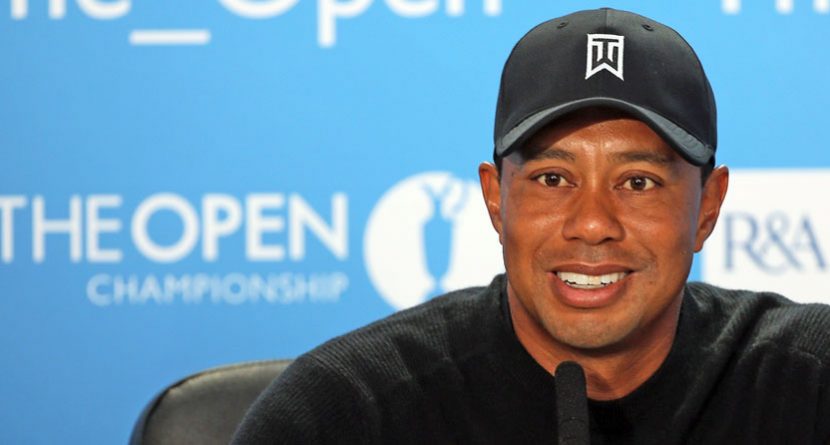 So Tiger Woods doesn’t have a chance at this week’s Open Championship, huh? You say he’s played only 36 competitive holes in the past four months, and hasn’t come close to winning since The Barclays last August, when he placed second. His last win was nearly a year ago at the WGC-Bridgestone Invitational.

Woods would like to remind you of the last major he claimed, the 2008 U.S. Open.

“If you remember in ’08 I had knee surgery right after the Masters. I won a U.S. Open (two months later),” he said during a press conference at Royal Liverpool on Tuesday. “I didn’t play more than nine holes, and the Sunday before the U.S. Open I didn’t break 50 for nine holes and still was able to win it in a playoff, with a (torn) ACL and a broken leg.

“I’ve proven I can do it. It’s just a matter of putting my game and giving myself the best chances this week to miss the ball in the correct spots, to be aggressive when I can and obviously to hole putts. That’s a recipe you find for every major championship, but I’ve just got to do it this week.”

Woods arrived in Hoylake on Saturday and has practiced on the course every day since. He took out his buddy Matt Kuchar in a match on Sunday. “Totally like the Tiger we’re used to seeing,” Kuchar said.

Woods’ back, which was operated on at the end of March, continues to get better.

“Playing at Congressional was a big boost to me,” he said of his appearance in the Quicken Loans National three weeks ago, where he missed the cut. “The fact that I was able to go at it that hard and hit it like that with no pain. It wasn’t like that the previous time I played. Playing at both the Honda and Doral (in March) I did not feel well. But to come back and be able to hit the ball as hard as I was able to hit it. I’ve gotten stronger since then, I’ve gotten more explosive, I’ve gotten faster since then. That’s going to be the case. I’m only going to get stronger and faster, which is great.”

Millions of fans will be tuning in to see if stronger and faster equals better. They can watch every single swing he takes via ESPN, which will stream a “Tiger Woods Channel” online at ESPN3 each day he plays. Tom Watson won’t be able to follow that Tiger tracker because he will be playing at Royal Liverpool himself. But the U.S. Ryder Cup captain will be keen to see how Woods fares. Watson desperately wants Woods on his squad this fall if “he’s playing well and he’s in good health,” Watson reiterated at a press conference Tuesday.

To show that he’s playing well come selection time, Woods needs to play well now. Good results will earn him points in the Ryder Cup standings, though he could be a captain’s pick regardless. More importantly, good results this week and in his next couple appearances will earn Woods points in the FedExCup standings. He needs to get into the top 125 to qualify for the FedExCup playoffs, which will give him more tournaments to play prior to the Ryder Cup in late September.

Woods said this week that he’s playing to win at Hoylake, where he also won in 2006. Some people scoffed at the notion that Woods could expect to claim the claret jug after playing so little competitive golf this year. Watson was not one of those people.

“I wouldn’t write off Tiger Woods for a long time, the way he plays the game,” Watson said. “He’s a tough competitor. He knows how to swing the golf club. And yes, he’s had some injuries and other things, issues. But the thing is, he’s had a long career, and I fully expect it to be a longer career.”