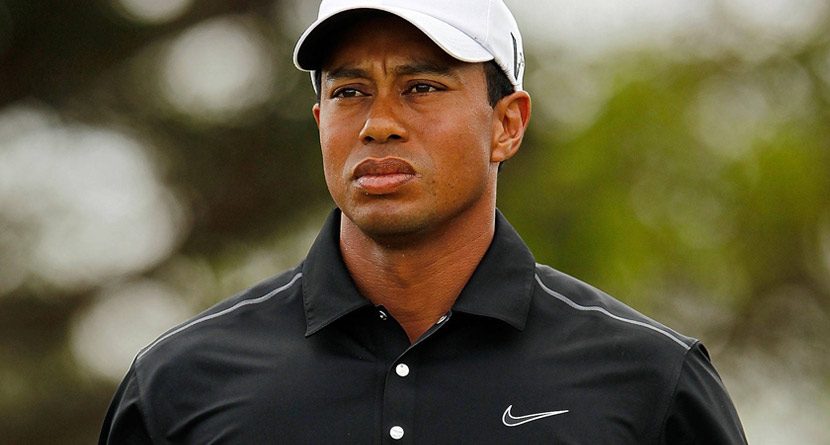 Tiger Woods is still aiming to return to golf this summer, and he hopes to compete in the FedExCup Playoffs and Ryder Cup this fall. But first, he needs to be able to bend down and pick up a ball out of the cup.

The world’s No. 1-ranked player (for now), who’s recovering from back surgery, posted a blog to his website on Monday, in which he detailed his rehab process, said missing the Masters wasn’t as hard as you might think, and mentioned that he’s filled the holes on his personal golf course with sand so that it’s easier to pick up balls from the cup. He’s been chipping and putting – no sand wedges yet – and having a lot of putting contests with his son. Woods would much rather be at TPC Sawgrass this week to defend his title at the Players Championship, but instead he’s gingerly walking, cycling and swimming. He remains sore from the incision made during the surgery, but says he should be able to come back faster than normal because he’s kept himself in such good shape throughout the years. Woods has been doing some rehab work with his girlfriend, skier Lindsey Vonn, who’s coming back from knee surgery.

“It does help to rehab with Lindsey [Vonn], but her programs are much further along than mine,” Woods wrote. “That does help when you’re not the only one suffering. It’s a good and bad thing that we’re both rehabbing at the same time. Her sessions are much longer and more developed. Her knee is getting stronger and it’s good to see. She hopes to be ready to compete again in December.” Because of his injury, Woods missed the Masters for the first time in his career, and while he said that was tough, he also wrote that it “wasn’t as hard for me as you might think.” When he’s physically unable to play, it’s not that tough to miss a tournament, even a major. But if he’s close to being healthy, yet sits out from an event, that gnaws at him more. Woods enjoyed watching Freddie Couples, the three-time Presidents Cup captain, stay in contention up until Sunday.

The bright side to Woods’ newfound downtime is the chance to spend more time with his kids, Sam and Charlie. He took them to the Bahamas for spring break, and has been going to a bunch of their soccer and T-ball games. And Charlie is beginning to get the hang of speed and break on putting greens.

“I have my greens running about 13 on the Stimpmeter every day, so your feel has to be a little better. When we were in the Bahamas, the greens were much slower and he almost beat me. If Sam and Charlie beat me, they’re going to earn it. That’s how Pop was with me, and I think that’s how it should be,” Woods wrote.

It’s good to see his competitive juices haven’t been sapped.