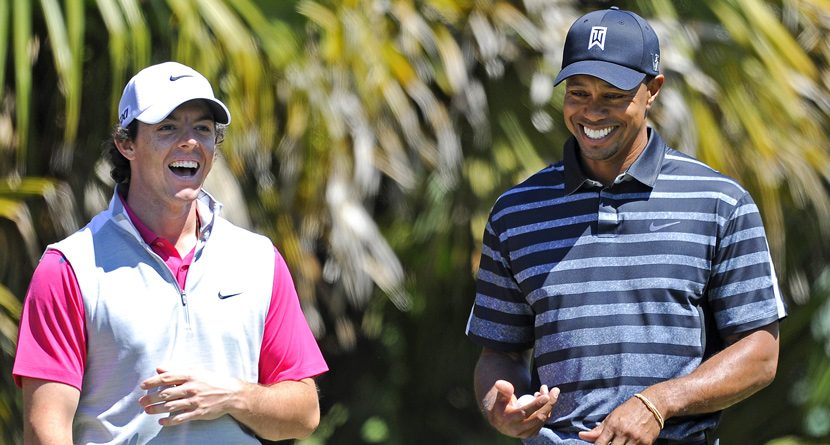 World No. 1 Tiger Woods and former World No. 1 Rory McIlroy arrived in Hainan Island off the south coast of China this evening ahead of The Match at Mission Hills, Monday’s 18-hole head-to-head contest on the Blackstone Course at Mission Hills Haikou.

Woods, 37, touched down at Haikou’s Meilan International airport late on Sunday evening, having flown from Florida, USA, and was welcomed at Mission Hills Haikou by Dr. Ken Chu and Tenniel Chu, Chairman and Vice-Chairman of Mission Hills Group respectively. “It’s great to arrive here and I’m looking forward to The Match and spending some more time with Rory,” Woods said. “I have heard good things about the course and I look forward to the challenge tomorrow.”

The 14-time major winner has won 79 PGA Tour titles including five this year and is favourite for the clash, although it marks his first time playing at Mission Hills Haikou, which boasts 180 holes of golf.

McIlroy, though, is familiar with the par-73 Blackstone track as it played host to the Omega Mission Hills World Cup two years ago, when he teamed up with Graeme McDowell and finished fourth for Ireland.

McIlroy, 24, believes his past experience over the long layout, which measures 7,301 yards for Monday’s contest, may give him an advantage. “I played here with ‘G-Mac’ and it was good. It’s a good golf course, a good layout and obviously we had a great chance to win here a couple of years ago. The course suits big hitters and there’s two of those tomorrow,” said the two-time major winner, who arrived at Mission Hills Haikou soon after Woods.

“It’s nice to be back and obviously every time we come we get looked after really well. It should be good and hopefully we’ll have a good match.”

McIlroy has recently been running into better form, which has boosted his confidence ahead of the clash with his friend and rival.

“I’m playing better, hitting the ball well. I hit the ball really well this week, didn’t really take any of my opportunities, but I’m playing much better so happy with my game.”

The Blackstone Course also hosted the Mission Hills World Celebrity Pro-Am in 2010 and 2012. The Match at Mission Hills is the latest event to be hosted by the Mission Hills Group, which has staged over 100 international tournaments and been at the forefront of developing golf in China since staging the World Cup of Golf in 1995.