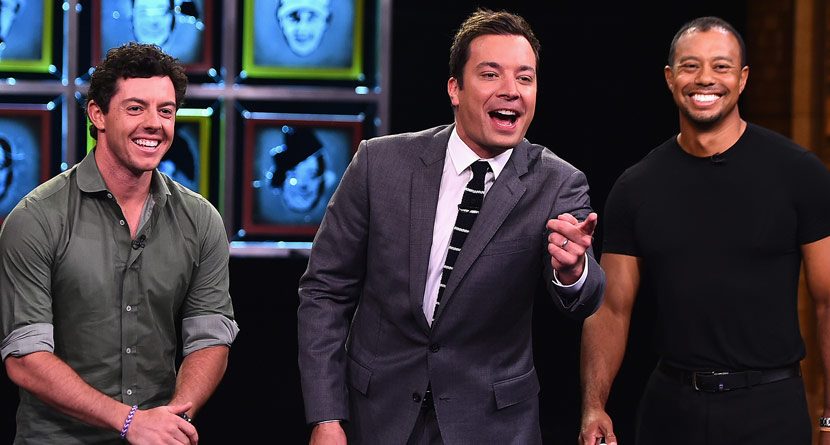 On Monday night, Tiger Woods and Rory McIlroy joined noted golf-nut Jimmy Fallon on “The Tonight Show” in what was one of the most epic television appearances the game of golf has ever seen.

Woods and McIlroy went on to show off the new Nike Vapor irons and square off in a round of “Facebreakers,” a popular game previously played on the show with Tom Cruise and footballs. On this night, McIlroy and Fallon took aim at each other’s faces with close-range wedge shots using Nike’s latest creation. Woods “caddied” for Fallon during the contest since his back injury won’t allow him to swing a club right now:

Prior to the game, when Fallon asked Woods for tips, he gave us a glimpse of the sense of humor he honed in the late 90s, saying, “Well, you saw how bad I’ve been playing. This thing of you jumping up and down keeps rolling through my head,” Woods said of Fallon’s celebration in 2010. “This is all your fault.”

And McIlroy touched on his impressive winning streak, which, if you include the “Facebreakers” challenge, is up to four.

“This little run that I’m on makes me appreciate what he’s done in the past,” McIlroy said, referring to Woods. “[It] makes you realize how dominant a figure [Tiger] was in the game.”

Lost in all this fun were the stunning new Nike Vapor irons, available for purchase on Halloween of this year. In case you missed the beautiful new irons — co-designed by Woods and McIlroy — here’s a look at them up close courtesy of GolfWRX.com:

Earlier in the day, Fallon and  Co., visited Liberty National Golf Club for some lessons. No offense to Fallon, but I don’t think he was the one giving the lessons:

While McIlroy is new to “The Tonight Show,” Woods is not. He isn’t quite a regular with Fallon, but has appeared before, offering excellent performances and giving us all a glimpse into the man behind the majors. Most notably, Woods lost at his own game — literally — when Fallon beat Woods at “Tiger Woods PGA Tour” in 2010:

Likewise, Monday’s appearance will be remembered for a long time to come.

Related: Most Likely To Make You Laugh: Fallon’s Golf Superlatives