Tiger Woods, Rory McIlroy Set For 1-on-1 Rematch in China 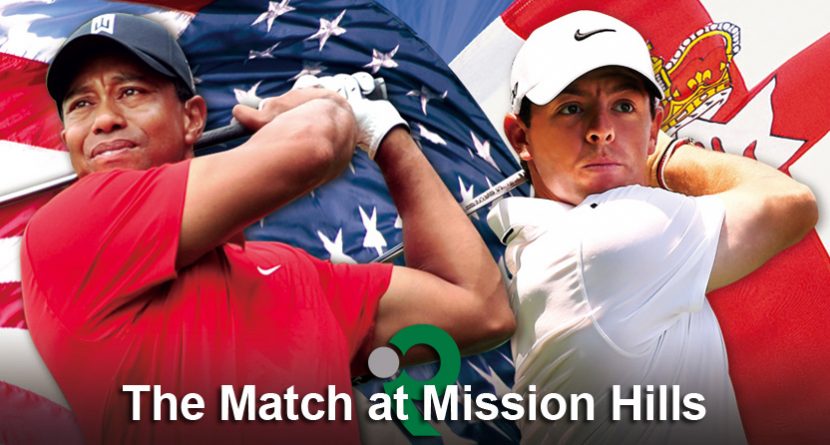 At any given tournament, ask fans who they’d like to see paired together on Sunday in the final group. The vast majority is going to say Tiger Woods and Rory McIlroy.

Well, it won’t be the final round of a tournament, but the two biggest names in golf will square off head-to-head this weekend in China.

“The Match at Mission Hills” marks the second straight year Woods and McIlroy will meet up in the world’s most populous country for a duel. The 2013 event – Oct. 28 in Haikou, China – will be streamed live exclusively on golf.swingbyswing.com and YouTube to countries outside the U.S. starting at 12:30 AM ET on Monday Oct. 28th, (PGA Tour rules restrict broadcasting an event such as this in the United States).

Back9Network’s new on-air host and executive producer, Ahmad Rashad, will be walking the course with the golfers, providing insight to players with whom he frequently plays. In addition, both players will wear microphones throughout the 18-hole round. With that inside access, viewers are bound to learn something new about two of golf’s best players.

Meantime, continue to scour golf.swingbyswing.com for complete coverage leading up to The Match – exclusive videos, an on-demand replay of last year’s duel, and much more. Because it won’t just be some friendly competition on the course.

“We both are pretty competitive people, and we’re going to go out there and try to play the best we possibly can,” Woods said. “He’s going to want to try and beat me. He’s probably the most competitive person that I’ve ever come across,” McIlroy said.

The 2012 event went down at Jinsha Lake, where McIlroy’s bogey-free 67 bettered Woods, who lipped out a bunker shot on 18 that would have made the match a draw. You can be sure Woods remembers that.

But they’ll be on a completely different course this year, some 1,300 miles south of where they dueled last year. Woods and McIlroy will battle on Mission Hills’ Blackstone Course, which is said the be the resort’s “crown jewel.” That’s saying something considering the Guinness Book of World Records lists Mission Hills as the world’s largest golf club. It’s three locations boast 22 courses.

The Blackstone Course is a par 73 at 7,808 yards – far longer than your average PGA Tour layout. It gets its name from the land’s dominant feature: lava rock, which serves as the course’s base.

If performance this year is any indication, Woods has the decided advantage. He won five times on Tour and is No. 1 in the world rankings. McIlroy began the season atop that perch, but slipped to No. 6, the result of securing only one top-5 finish all year.

Yet McIlroy isn’t afraid of Woods, as evidenced by his win at Jinsha Lake last year and his eagerness to compete against Woods (no matter how staged it was) in his debut commercial for Nike back in January. The ad became an instant classic:

And the two are actually quite good friends. Whom else does Tiger encourage via text messages? Or whose ear other than McIlroy’s would he flick while gathering for a formal photo? That makes them want to trounce the other one that much more.

“It’s always important to win and there’s no doubt about that. I’ll play to go out there and make a bunch of birdies,” Woods said.

The Match is gonna be a dandy.

A Look At Mission Hills