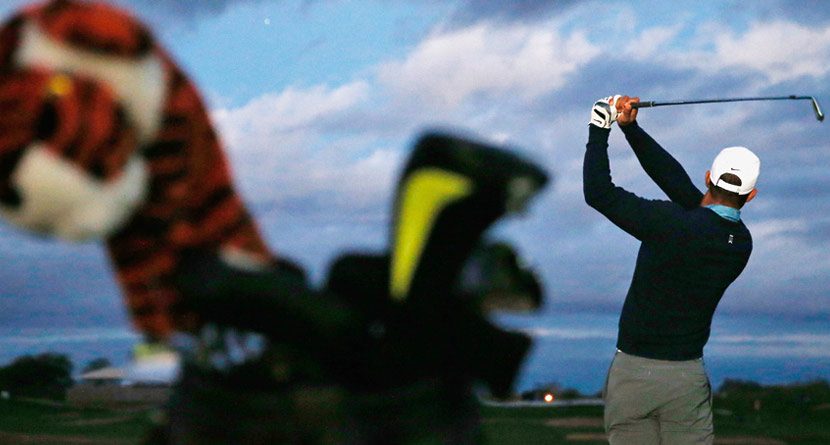 Before “deflate-gate” took the world by storm, “tooth-gate” was the prevailing controversy making headlines. On Tuesday, Tiger Woods finally cleared that up.

In case you’ve forgotten, Woods claimed to have a tooth knocked out by a cameraman while in Italy watching his girlfriend Lindsey Vonn set a world record on the slopes. He spoke publicly for the first time since the incident during his press conference ahead of the Waste Management Phoenix Open and stuck to that exact story.

“I had my mask on so no one knew who I was, that was the whole idea,” Woods told the media. “I was looking down and all the camera guys were below me on their knees trying to get a picture [of Lindsey Vonn]. Dude with a video camera on his shoulder, right in front of me, stood up and turned and caught me square on the mouth.”

Woods claimed the plane ride home was a “joke” since he wasn’t able to eat drink or breathe without pain. He had surgery the next day and has been smiling ever since.

When Woods was asked about people not believing his story, he said, “Dude, you guys, it’s just the way the media is. It is what it is.”

Woods also addressed his game’s progress since the Hero World Challenge in September and the changes he and Chris Como have been working on.

Woods acknowledged that he’s gotten stronger off the tee, too.

“I’m a lot longer than I thought I ever could be again,” he said. “My speed is way back up and that’s fun. I’m touching numbers that I did 15 years ago, so that’s cool.”

Woods will tee off Thursday morning at 12:07 local time, paired with Patrick Reed and Jordan Spieth.