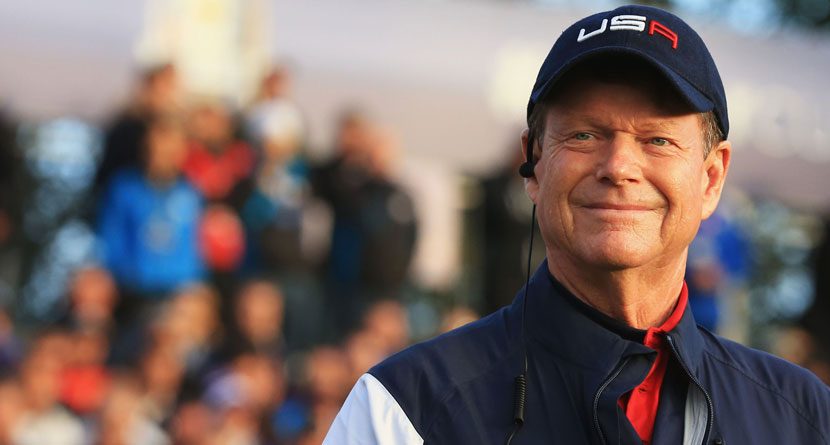 While it may not completely explain the inconsistent play, this weekend’s news of a bonding session gone bad does help make sense of the awkward press conference following the U.S. Ryder Cup team’s third consecutive loss last week at Gleneagles.

Following the 16 1/2-11 1/2 loss last Sunday, Phil Mickelson had some blunt comments in reply to questions about the team’s effort and captain Tom Watson’s leadership. To make matters worse, Mickelson shared the stage with his 11 teammates and Watson while making the comments.

This, of course, led to quite a bit of speculation and much discussion as to where the U.S. would turn for the 2016 Ryder Cup at Hazeltine National.

According to an ESPN.com story Friday, it all came to a head for the U.S. team Saturday evening following the completion of play. The team was to spend time bonding and focusing on coming back from the 10-6 deficit it faced heading into Sunday singles matches but, according to the ESPN.com report, things went awry. The players presented Watson with a gift — a replica Ryder Cup trophy signed by each team member — and the captain reportedly told the team that the gift meant nothing to him if they didn’t win the real thing the following day.

According to the article, he also opened the proceedings by telling the team, “you stink at foursomes,” following a dismal afternoon in which the team earned only half of a point. Watson also went on to ridicule the European players when breaking down the singles matches.

Following Friday’s report, Watson released a comment saying that he takes full blame for the mistakes made and that he regrets that some of his comments were taken negatively by the U.S. squad.

“I take complete and full responsibility for my communication, and I regret that my words may have made the players feel that I didn’t appreciate their commitment and dedication to winning the Ryder Cup,” the statement said. “My intentions throughout my term as Captain were both to inspire and to be honest.”

He even spoke about Mickelson’s comments, saying:

“I completely understand his reaction in the moment. Earlier this week I had an open and candid conversation with him and it ended with a better understanding of each other’s perspectives. Phil’s heart and intentions for our Team’s success have always been in the right place. Phil is a great player, has great passion and I admire what he’s done for golf.”

It’s been a torrid few days for the U.S. Ryder Cup effort. After the loss, players and fans began suggesting the PGA of America anoint Fred Couples or 2008 U.S. captain Paul Azinger as the leader in 2016. On Thursday, Azinger appeared with John Maginnes and Jeff Rude of “The Clubhouse“ on Back9Network and commented that the entire U.S. process needs to be adjusted.

In the interview, Azinger said that he believes the problem facing the U.S. Ryder Cup runs much deeper than Watson and his management techniques.

In any event, Watson is accepting the blame for this latest American Ryder Cup failure.

“The bottom line is this. I was their Captain. In hindsight whatever mistakes that were made were mine. And I take complete and full responsibility for them.”