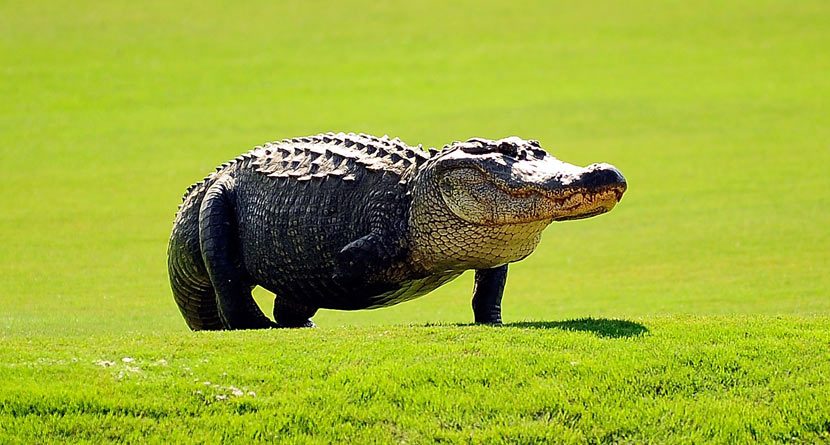 A lot of golf courses have their attractions. At Pebble Beach, it’s the panoramic views and the world-class golf. At TPC Sawgrass, it’s the island green at the par-3 17th hole. Neither of these, however, can kill you.

One of the big attractions at TPC Louisiana, the site of this weeks Zurich Classic of New Orleans, is a three-legged alligator named “Tripod.” And he’s not just an attraction and cool story for the fans; players want to catch a glimpse of him, too.

Pre-tournament scouting: J.B. Holmes and @LukeGuthrie getting a close-up look at Tripod, the three-legged gator. pic.twitter.com/qLjYhjtGkk

According to local reports, Tripod doesn’t show up all too often unless the Zurich is in town. TPC Louisiana course superintendent Robb Arnold said in an interview with NOLA.com, “For whatever reason, they (TPC Louisiana alligators) have an affinity for the media and especially Tripod. I don’t see him out of the water but maybe two or three times a year. But when the tournament rolls around, that boy is out of the water more than any other (gator) I’ve ever seen.’’

Normally, there aren’t too many issues between fans and the gators. In the same interview, Arnold acknowledged that that was mostly because most guests are locals and are used to seeing gators around the golf courses. That being said, in 2010, Tripod got himself into a spot of bother when some fans decided to feed him.

“He goes where he’s going to get fed,’’ Arnold said. “That was a bad situation. We don’t want that to happen.”

Trappers were called in to remove Tripod, but Arnold admits, “We had a battle. Tried to trap him on 17. Tripod won that battle.’’

“They don’t ever really bother people,’’ said Arnold of the gators that inhabit the ponds and wetlands in and around TPC Louisiana. “They hang out on the banks. I constantly tell my staff we don’t feed them. We don’t mess with them. Let them do their thing. They’re more afraid of you than we are of them. We let them stay in their habitat and they leave us alone. But we’re very conscious of where they’re at and try to be cognizant of their habitat.’’

It’ll be interesting to see if Tripod makes an appearance this year. Surely, the famed reptile will continue to be as much a draw to out-of-town folks as the golfers themselves.