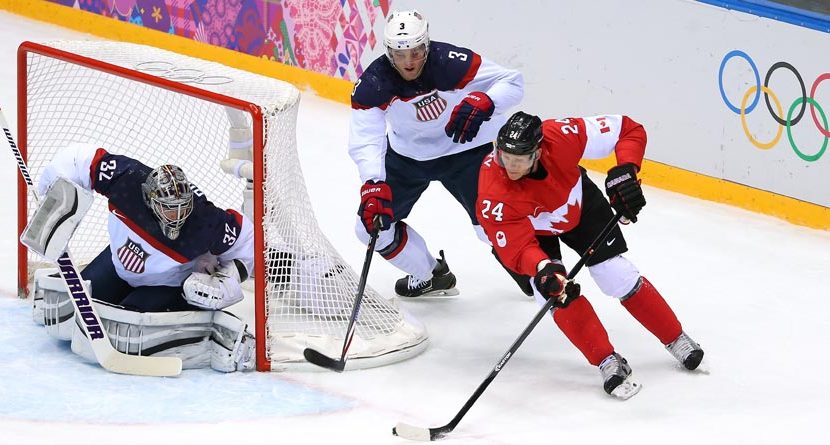 United States vs. Canada. It wasn’t for all the marbles, but it was for a chance to win the Olympic men’s hockey gold medal on Sunday. Friday’s semifinal game was a rematch of the 2010 Olympic final, and both were won by Canada.

Golfers have been tweeting about the game since Wednesday, when the U.S. knocked off the Czech Republic and Canada took out Latvia. We tracked the big game Friday and the tweets of golfers watching the action.

My 3 new favourite Canadians…@dewyy8 @jamiebenn14 and @CP0031. Not necessarily in that order. #beasts

Well if the USA is going to lose I’m glad @jamiebenn14 had the game winner! Congrats! pic.twitter.com/n31IR1jGp5

Had to TiVo game, just finished. What a game! Can’t wait for this final. Can’t beat Olympic Hockey! #canada

@jonas_blixt it’s on!! And this isn’t the same team from Lillehammer!! #GoCanadaGo #gold

To help inflammation I was told to cut flour, sugar, gluten, sodium from my diet. And USA just lost to Canada in hockey.

All around some of the best hockey I have seen from the men and women this year!! #sochi #GoCanadaGo

Bummer I really wanted US to win mens hockey!

It’s coming down to the wire in the USA-Canada game. Officer @DJohnsonPGA is getting nervous… #LoserKeepsBieber

Good job for the USA that Quick guy is playing!! Keep getting chances. #GoCanadaGo

#USAHockey will take care of Canada today! The ladies couldn’t get it done but the men will! Sorry Wayne!!! #Olympics2014

If your classes start at noon tomorrow in Canada, well then, you don’t really have any classes tomorrow. #OhCanada #GoCanada

Tomorrow’s men’s hockey game between USA and Canada should be awesome also. Hoping for some USA revenge from 4 years ago.

What a great women’s hockey game between USA and Canada today!! Wish USA would have won but happy for Canada (wife is Canadian).

U.S. women vs. Canada: On Thursday, golfers sent out tweets following the women’s USA-CAN game, which was won by Canada with two late third-period goals to force overtime, and a power-play goal in the extra period to clinch the title.

I thought it was painful to sit through a Women’s Open ceremony after finishing second. This Women’s Olympic Hockey ceremony is torture!

Agree! RT @ronsirak: Tough, tough loss for the USA to Canada but a great, great game. A huge win for women’s sports!!! #olympics