Video: This Is The Most Insane Way To Pull A Loose Tooth 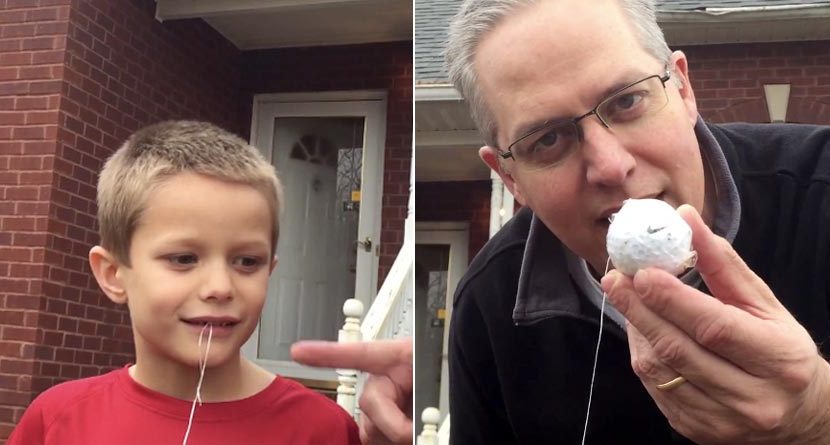 There’s a reason why the saying “it’s like pulling teeth” is used so frequently: It hurts and it’s not easy to do. How do you make it easier? With a golf ball and the iron of your choosing, of course.

At least that’s what Phil the Alabama Crimson Tide (and Tennessee Titans?) fan thought. His son Noah had a loose tooth, so Phil decided to tie a string to it with the other end attached to a golf ball.

Phil then grabbed an iron and hit the ball, thus pulling the tooth. Did it work? You’ll have to watch and see:

Genius? Or pure stupidity? I’ll let you be the judge, but I think a pair of pliers would’ve been a safer choice. And Phil was definitely nervous … just look at those shaky hands.

What’s most surprising is the fact that “Roll Tide” wasn’t said once in the video. Upset of the year for sure.

Other Hot Links:
– Creepy NBA Fan Sniffs Sweaty Jersey In Bizarre Video
– Too Much Snow? Have No Fear, ‘Snolf’ Is Here
– Jim Furyk’s Maui Mansion Hits Market At $5.995 Million
– The Clubhouse: Pro Football Hall Of Famer Eric Dickerson
– The Clubhouse’s 20 for 2015: No. 3 Phil Mickelson
– Where Would You Go If You Could Travel The World In 4 Hours?
– One Direction Star Receives Lifetime Membership To Irish Golf Club
– Corvette Stingray Dash Cam Catches Valet Misbehaving
– Tweek In Review: The Week’s Best Tweets
– The Fringe: Gary Player Predicts Rory To Win Masters & The Boldest Predictions
– Is This Ridiculous Backstop-Putt Better Than The Original?
– The Clubhouse’s 20 for 2015: No. 4 Dustin Johnson