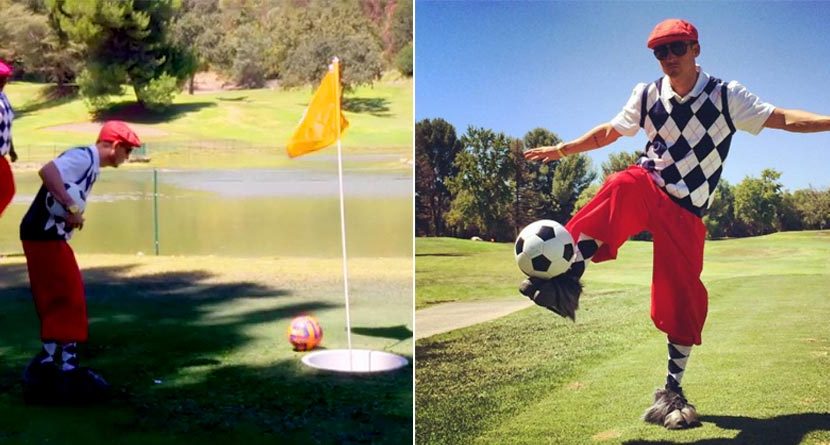 Reality TV personality Rob Dyrdek is the type of guy who pretty much does whatever he wants and has a blast doing it. And seeing as he has an entire factory at his horizon, the options are limitless.

In this edition of “Rob Dyrdek did something I wish I could do,” he and his crew turned the Fantasy Factory into a Footgolf course. Why? Because they had a tournament to prepare for.

In the season seven premiere of “Fantasy Factory,” Dyrdek and his friends played in the SoCal Footgolf Championship. As if the sport wasn’t hard enough, Rob decided to play wearing goat feet, because well, he’s the G.O.A.T.

Thank you to @FootGolfCA for putting on an amazing championship today .The G.O.A.T. Foot is officially world ranked!

The non-stop, hard-hitting, Footgolf action begins at the 8:10 mark in the episode below.

Although the team didn’t come away with the results they wanted, it definitely seemed like they had a lot of fun. Somehow, upon completing the tournament and finishing no better than 22nd, they all became ranked in the Footgolf World Rankings.

Being Rob Dyrdek, he had banners hung in the factory to commemorate their accomplishments.

If you too want to become the G.O.A.T. like Dyrdek and take on the name of “Goat Foot,” you just have to retweet his post. I’m not sure when the contest ends, so do it soon if you want any chance of wearing those strange feet. And remember, “Goat Hard.”

Win the GOAT Feet from tonight’s #FantasyFactory! Just retweet to a friend for a chance to win! 10PM ET on @MTV! pic.twitter.com/YE6BLEBrxY