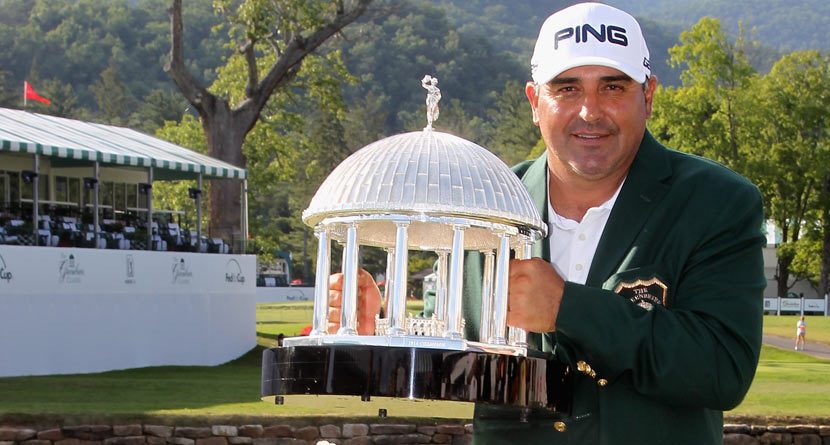 Angel Cabrera came into the Greenbrier Classic in a slump and he left a champion. A couple of Sunday aces meant a number of fans left White Sulphur Springs a little richer and Graeme McDowell went low in a water-logged final round in Paris to successfully defend his Alstom Open de France title. Here’s a look back at the weekend in golf:

For a guy who has won as often around the world as Angel Cabrera has, it’s a little surprising that his win on Sunday at the Greenbrier Classic was only his third in PGA Tour competition. His other two wins on American soil were triumphs at the 2007 U.S. Open and the 2009 Masters. Cabrera, who had been winless since claiming the green jacket in ’09, fired his second consecutive six-under 64 to top a surging George McNeill by two strokes.

McNeill had a pretty solid day himself, making an ace on the par-3 eighth hole en route to a Sunday 61, but it was Cabrera who prevailed. Coming into this week, the 44-year-old Argentine hadn’t even logged a top-10 finish this year, but thanks in part to his booming drives, clutch putting on the back nine and this incredible eagle on the par-4 13th, he got the job done:

Billy Hurley III stumbled to a final-round 73, making this the fifth time in five years that the player who slept on the 54-hole lead failed to win the Greenbrier. Also of note, as part of The Open Championship Qualifying Series, four players punched their tickets to Hoylake with top-10 finishes. Along with the aforementioned McNeill and Hurley, Cameron Tringale and Chris Stroud also played their way into the field at Royal Liverpool in two weeks.

It wasn’t easy, but for the first time in his career, Graeme McDowell has successfully defended a title. Last year’s champion at the Alstom Open de France, McDowell began the day eight shots back of the leader, Kevin Stadler. The “Smallrus” started the day at nine-under par but struggled on the greens, missing putts measuring 18 inches, four feet and on 18, from two feet. Had he made the two-footer on 18, he would’ve been in a playoff with McDowell.

After the win, McDowell told the media that he was “very surprised,” and that “midway through [his] second glass of red wine last night,” he didn’t think that he’d “be standing here … with a trophy in [his] hands.”

“I feel very fortunate. Kevin Stadler is a great, great player,” McDowell said. “I literally gave him that putt on the last green. I didn’t expect him to miss that.” Like the Greenbrier Classic, the Alstom Open de France was also part of The Open Championship Qualifying Series, giving spots in the Open Championship to three players finishing in the top-10 who weren’t already exempt. The players picking up a spot in the field at Royal Liverpool from the French Open were Robert Karlsson, Michael Hoey and Victor Riu.

Little did he know it, but when Bud Cauley drained his tee shot on 18 for the second ace of the day on Sunday at the Greenbrier Classic, he also made everyone in attendance around the 18th hole a little richer. Jim Justice, director for the tournament, had a promotion that would give each fan around the 18th green when an ace was made $100 each. When Cauley’s ball dropped, the checks began printing.

About 30 minutes earlier, George McNeill made an ace on the par-3 eighth hole. The hole-in-one was the second on Tour since the beginning of Quicken Loans Hole-in-One Sweepstakes last week at Congressional and thus, won another lucky fan, Janet Alexander, mortgage payments for a year.

“I would love to have a free mortgage for a year,” McNeill said after his round. “That’s great. Congratulations to Janet and … thanks to Quicken Loans.”

Cauley’s ace, along with the $100 promotion from the Greenbrier, also won mortgage payments for a year for a fan. This time, Angelisa Annichiarico was the beneficiary.

“That’s awesome,” Cauley said. “I’m sure it’ll help out a lot and make a huge difference in their lives.”

The total tally for aces on the PGA Tour in 2014 is now up to 13. For McNeill, it was his second in competition and for Cauley, his first.

Kim entered the weekend at five-under par, but distanced herself with a blistering nine-under 63 on Saturday. She continued to pour it on on Sunday, firing a four-under 68 to win by five. Campbell finished in solo second at 13-under.

Woods, who won the Australian Ladies Masters earlier this year finished the week at one-under, good enough for a T-27 showing. Other Hot Links:
– Back9Network Launches On DIRECTV Sept. 29
– The Dufners Had A Better Fourth of July Than You
– The Breakdown: The Numbers Reveal 2014’s Hottest Golfer
– On Display: John F. Kennedy’s Presidential Golf Getaways
– WGC-Match Play Gets New ‘World Cup-Type’ Format in 2015
– Hunter Mahan Went Undercover and Unnoticed at Under Armour
– Adam Levine to Open ‘Weed and Golf’ Store?