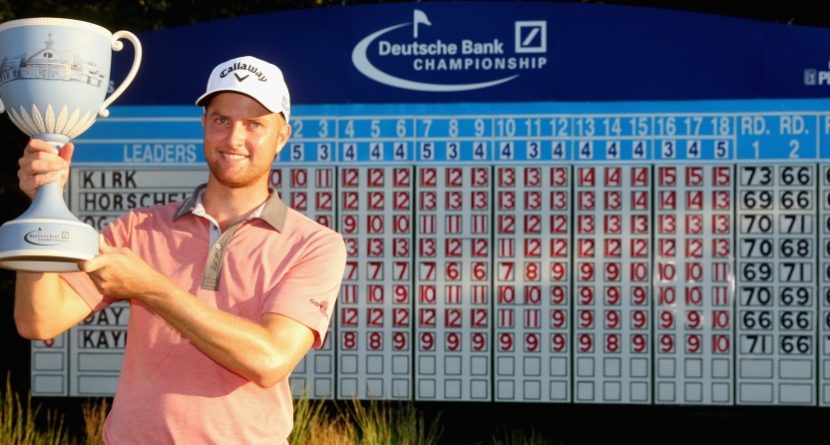 While you were enjoying no labor on Labor Day weekend, much work was being done on the golf course. Here’s a look back at the long weekend:

Chris Kirk bests Rory McIlroy, takes over FedExCup lead
Russell Henley held the 54-hole lead at the Deutsche Bank Championship, entering Monday in the final group with Billy Horschel, who was just a stroke back. But sitting ominously two strokes behind Henley was world No. 1 Rory McIlroy. He carded the best round of the day on Sunday (7-under 64), and the world was well aware of how spectacular he’s been playing of late. Yet, it turned out that McIlroy wasn’t the one to watch; it was his playing partner. Chris Kirk matched McIlroy’s 64 on Sunday while playing right alongside the four-time major winner, and then he posted a second straight bogey-free round on Monday. Kirk closed with a 5-under 66, and McIlroy struggled to a 1-under 70, the same number Henley posted. That gave Kirk his second win of the 2013-14 season, the new lead in the FedExCup standings (819 points ahead of McIlroy), and quite possibly a spot on the U.S. Ryder Cup team. Tom Watson will make his captain’s picks on Tuesday.

Stephen Gallacher misses automatic Ryder Cup berth by a stroke
It was a tough task, but Stephen Gallacher needed a top-two finish Sunday at the European Tour’s Italian Open to secure an automatic berth on Europe’s Ryder Cup team. Things looked good when he rolled in six birdies on the front nine of his final round. But he could manage only one the rest of the way, and settled for a 7-under 65. That left him in third place, one stroke back of second-place finisher David Howell, who matched Gallacher’s seven birdies and no bogeys, but also added an eagle at the first hole. Now, Gallacher must wait for European Ryder Cup captain Paul McGinley’s wild card picks on Tuesday. The winner of the Italian Open, by the way, was Hennie Otto, who topped Howell by two shots.

Austin Ernst holds on for first LPGA win
As a 21-year-old rookie last year at the Safeway Classic in Portland, Ore., Austin Ernst shot up the leaderboard with a third-round 62 and ended up tying for ninth, just her second career top-10 finish on the LPGA Tour. It wasn’t until she returned to the same Columbia Edgewater Country Club course this week that she collected another top-10 – and this one was good for her first career victory. Ernst opened with three consecutive rounds of 3-under 69 at the newly-named Portland Classic, then carded a 67 on Sunday. That 14-under score came after she bogeyed her final two holes. But Ernst rebounded and made par on the first playoff hole against I.K. Kim to bank $195,000 for her efforts.

Fred Couples cards 61 after chip-in eagle on 72nd hole
A playoff was also needed at the Champions Tour’s Shaw Charity Classic on Sunday in Calgary, Alberta, where Fred Couples chipped in for eagle on the 72nd hole to force extra golf with Billy Andrade. After carding a course-record 9-under-par 61, Couples rode that momentum to a birdie in the playoff on the same 18th hole he’d just eagled. Andrade made par in the playoff after he also eagled the 72nd hole, which gave him a final-round 62. That score isn’t often going to play second fiddle to a better round, but Andrade could do little as Couples’ chip from 40 feet hit the pin and dropped. They finished the three rounds at 15-under.