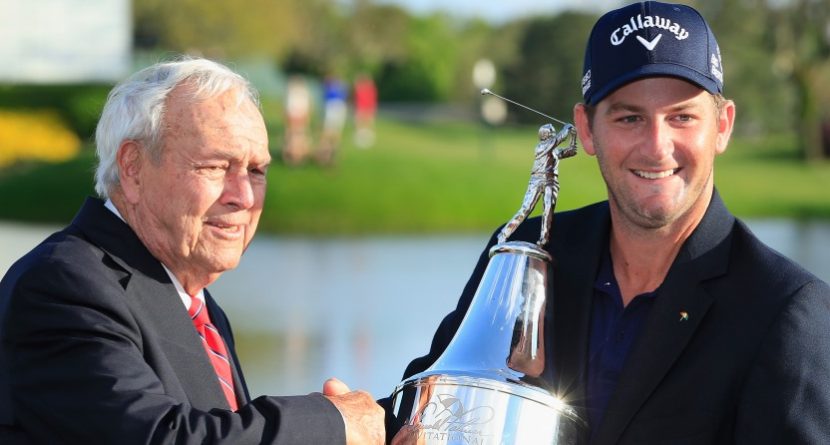 Going into the weekend, we and many others were certain that Sunday would be capped by world No. 2 Adam Scott posing for pictures with The King at the Arnold Palmer Invitational in Orlando. But the Aussie faltered, as did a few others, while another Aussie capitalized on the LPGA Tour.

Every weekend presents new chances
Rather than Scott collecting his 11th career PGA Tour win, Matt Every won his first. The 30-year-old sat four shots behind Scott entering Sunday – and nine shots back going into Saturday – but carded a 2-under-par 70 to eke out a one-stroke victory over Keegan Bradley. And Every walked with the $1.1 million check despite bogeying two of his final three holes. With his first PGA Tour triumph in 92 events, Every gets an invite to the Masters and PGA Championship, as well as two entries into World Golf Championships events.

Scott slips to third after scorching first round
Scott crushed Bay Hill on Thursday, when he opened with a course-record-tying 10-under 62. It would be understandable that he didn’t match that number the rest of the week, but the fact that he fell so far off was shocking. A 68 on Friday and 71 on Saturday were still good enough to leave Scott with a three-shot lead going into the final round, but bogeys on two of his first three holes Sunday indicated he wasn’t trending the right way. A birdie 4 on No. 4 helped, but that was his only such mark of the day, and he finished with a 4-over 76 for third place (11-under overall). Scott’s anchored putter did him in Sunday – he missed five putts from less than 10 feet, including a four-foot birdie attempt on No. 16 after a missed eagle chance from 20 feet.

Free fallers
Scott wasn’t the only golfer who fell down the leaderboard Sunday, and he didn’t fall nearly as far as others. Chesson Hadley, who won two weeks ago in Puerto Rico, started the day in fifth place but finished T-26 after a 7-over 79 (6-over in his last five holes). Ian Poulter was in seventh but dropped to T-20 after a 76 (quadruple-bogey at No. 11). Patrick Reed dropped 33 spots and nowhere near the top five (T-52) after a 77 (double-bogeys on two of his last three holes). And Sam Saunders, Arnold Palmer’s grandson and a Web.com Tour regular, started the day in an impressive 15th place, but a 77 sank him to T-43 (three birdies, four bogeys, two double-bogeys).

Karrie Webb flies to victory at LPGA Founders Cup
Hall of Famer Karrie Webb of Australia teed off Sunday six shots off the lead, but that was nothing a course record couldn’t overcome at the LPGA Tour’s JTBC Founders Cup in Phoenix. Her 9-under-63 round and 19-under overall score put the heat on those playing behind her, and five women came within a stroke but no one could top Webb. And so the 39-year-old collected her second win this season and now has 41 in all on the LPGA Tour. Notables tying for second were American Stacy Lewis and 16-year-old Lydia Ko – who are ranked third and fourth in the world, respectively, ahead of Webb at No. 6 (for now). Jeff Maggert wins Champions Tour debut
Barely a month after his 50th birthday, three-time PGA Tour winner Jeff Maggert grabbed win No. 1 on the Champions Tour in his first try. A birdie at No. 17 came courtesy of a 50-foot putt and helped him to a two-shot win over Billy Andrade. Maggert’s 4-under 68 on Sunday and overall 11-under score made him the 17th player in Senior Tour history to claim victory in his debut. He earned $240,000 for his efforts.

Related Link: Ian Poulter Gets In Another Twitter Battle