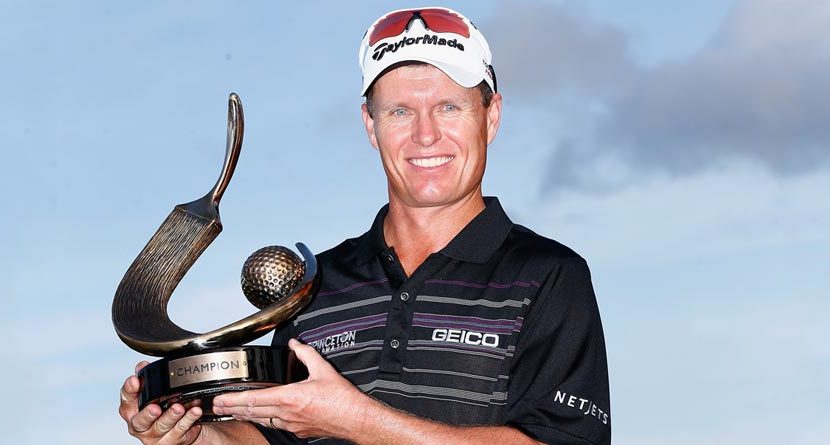 While the field struggled on a windy Sunday at Innisbrook Resort in Palm Harbor, Fla., John Senden took advantage and claimed his second career PGA Tour win and punched a ticket to the Masters next month. While on the European Tour this week, Alejandro Canizares also snapped a seven-year winless drought and became the first wire-to-wire winner (with no ties) since Marcel Siem did it exactly one year ago.

Here’s a look back at the weekend in golf.

John Senden Collects Second Career Win and Masters Invite
Senden tamed the “snake pit” down the stretch at Innisbrook Resort to claim his first PGA Tour win in seven years and clinch a spot in this year’s Masters Tournament. Senden holed out from 70 feet for birdie on 16 then buried a 20 footer for the same on 17 to notch his first victory since the 2006 John Deere Classic. It was his second career win on the PGA Tour. Looking forward to the Masters, the Aussie has made four appearances, missing three cuts and finishing T-35 at Augusta last year.

Kevin Na Misses Playoff By One Stroke, Still Looking for 2nd Career Win
Na had a birdie opportunity on 18 on Sunday to force a playoff with the eventual champ but came up short. Na played well all week, coming into Sunday with a 7-under-par but, like most of the field, struggled in the wind and stumbled to a 1-over-par 72. Na’s last victory on tour came in 2011 at the Shriners Hospitals for Children Open.

Luke Donald Logs Fourth Straight Top-6 Finish at Innisbrook
Former world No. 1 Donald fired a final round 70 to move up four spots and finish T-4 at the Valspar Championship. Donald, who won this event in 2012, has owned the Copperhead course at Innisbrook Resort in recent years. Along with his win, Donald had compiled two T-4 finishes and a T-6 in his last four starts in this event.

Alejandro Canizaras Claims First Win In Seven Years
Canizares dominated all week in Morocco on his way claiming the Trophe Hassan II Golf Championship. Canizares accomplished the same feat that Marcel Siem did in this event last year, leading wire-to-wire without being in a tie all week en route to victory. Like Senden, it was also Canizares’ first win since 2006. His last win came at the Imperial Collection Open that year.