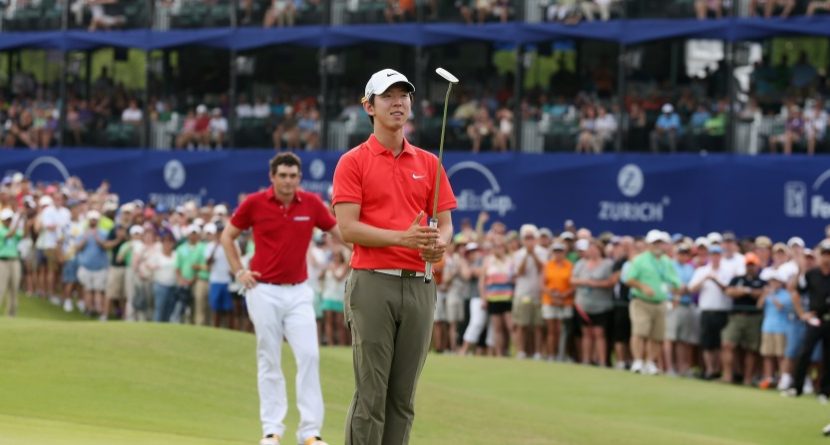 Here’s a look back at the world of golf this weekend:

Seung-Yul Noh nabs title in New Orleans
South Korea’s Seung-Yul Noh entered Sunday at the Zurich Classic holding a two-shot lead, but with a major champion like Keegan Bradley playing with him in the final group, Noh figured he’d need a fourth straight bogey-free round to pull out the win. Then he went out and carded his first bogey of the week on the first hole of the day and eventually fell into a tie with Bradley. But Bradley was the one who tumbled from there, posting a bogey on No. 5 and a triple-bogey on No. 6, eventually finishing in a tie for eighth. That left him six shots behind Noh, who settled in for a 1-under 71 on the day and a 19-under 269 overall for his first career PGA Tour victory. He was the first to go bogey-less through 54 holes at TPC Louisiana, became the New Orleans event’s seventh first-time PGA Tour winner in the past decade, and walked with $1,224,000 and invites to the Players Championship and 2015 Masters.

Noh wore black and yellow ribbons on his hat in honor of victims of the ferry accident in South Korea on April 16 that left 300 people either missing or dead. “Hopefully, they’ll be happy,” Noh said.

Lydia Ko caps the greatest week ever
On Wednesday, Lydia Ko was named one of Time Magazine’s 100 Most Influential People. On Thursday, she turned 17. On Sunday, she birdied three of her final six holes, including 18, and edged Stacy Lewis by a stroke for the Swinging Skirts LPGA Classic title, Ko’s first on the LPGA Tour since turning pro in October. The final-round 3-under 69 in San Francisco gave Ko a final score of 12-under 276, and $270,000. The teenager’s first two LPGA wins – the 2012 and ’13 Canadian Opens – came while she was still an amateur and unable to collect money. The victory will bump Ko, who was born in South Korea and raised in New Zealand, to No. 2 in the next world ranking, up from No. 4 and one spot ahead of Lewis. Alexander Levy cruises in China
While Asians won on the PGA and LPGA Tours on Sunday, Asia played host to the European Tour with the Volvo China Open in Shenzhen, China. And it also bore witness to a first, as France’s Alexander Levy dropped in birdies on his final two holes to secure his first European Tour title by four shots over Tommy Fleetwood. A third place last year at the BMW International Open in Munich was Levy’s previous best finish on the Euro tour, prior to his 19-under 269 in China. Eight shots back in a tie for fifth was Henrik Stenson, who’s No. 3 in the world but could’ve moved to No. 1 with a win. Tied with the same 11-under score was Ian Poulter, who prepared for this tournament by playing pingpong with Jason Dufner (T-54) and some world champion table tennis players. Other Hot Links:
– Tiger Woods Eyeing Return at 2014 Open Championship
– Pulling a Cart Can Be Tough, So This Robotic Cart Follows You
– Ian Poulter Mistake Gets Animated Responses
– Bubba Watson Returns Home, Tosses Wahoos’ 1st Pitch
– Which Golfers are Earning the Most Money Per Round?