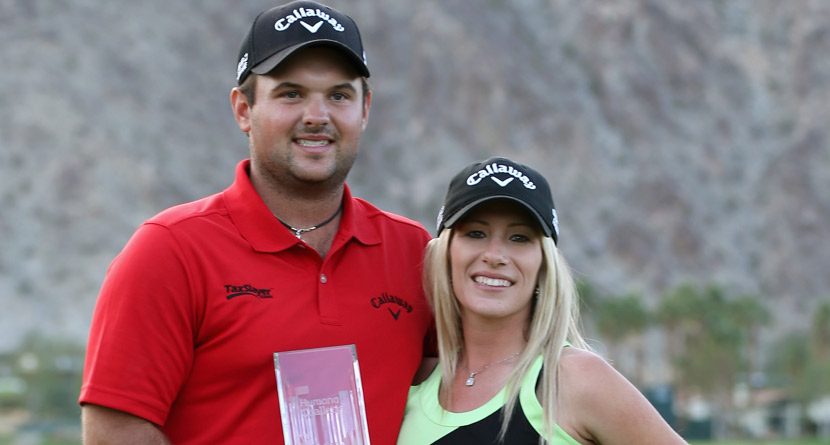 With the NFL Conference Championship weekend going on, it’s easy for some to forget there was some incredible golf being played around the world. This week featured some truly amazing and lucky golf shots, as well as a record-setting performance and an underdog triumph. Here’s a look back at the weekend:

Patrick Reed’s 1-under par 71 on Sunday at the Humana Challenge made things interesting, but neither Zach Johnson’s 62 nor Ryan Palmer’s 63 were enough to knock off Reed. Reed came into the day with a seven-shot advantage, but struggled most of the day. Nevertheless, he claimed his second PGA Tour victory in 31 starts, joining Harris English and some kid named Rory McIlroy as the only players under the age of 25 with multiple wins on tour. He also set the tour record for lowest 54-hole score in relation to par by firing three consecutive 63’s to start the tournament. The Augusta State product led wire-to-wire and is now nestled in the eighth spot in the FedExCup standings.

Pablo Larrazabal Outlasts Rory and Phil in the Desert

The week started with Mickelson and McIlroy as the top-ranked players and the top stories at the Abu Dhabi HSBC Golf Championship, but in the end they were bested by Spanish star Pablo Larrazabal. He carded a final-round 67 en route to his third career European Tour win. Mickelson and McIlroy both incurred penalties during the week which cost them strokes and ultimately a shot at the title. In an interview with the European Tour, Larrazabal credited his big week to his new Big Bertha driver, the same one Mickelson spoke so highly of earlier in the week. The win vaults the Spaniard up to seventh in the Race to Dubai standings. Keegan Bradley’s Ace in the Hole

Keegan Bradley had a pretty solid week in Palm Springs finishing at 19-under for the tournament. Obviously, he had some pretty awesome shots during the week but one in particular “made the papers.” Bradley stepped up to the par-3 third hole on the Nicklaus Private course during the second round of the Humana Challenge and buried his tee shot for a hole-in-one. According to the PGA Tour, the ace was the first hole-in-one in a PGA Tour event of Bradley’s career.

This week in the desert was a microcosm of  everything we’ve come to expect from Phil Mickelson. Lefty was absolutely brilliant on and around the greens this week, which kept him in the hunt all the while. But one too many errant tee shots and a lapse in judgement cost him the win in Abu Dhabi. Mickelson was at -13 and in control of the HSBC Golf Championship on the 11th hole on Sunday when he drove his tee shot right and under a bush. Instead of taking an unplayable, Mickelson tried to punch out and double-hit his ball on the swing without extricating it. Ultimately, he took a triple-bogey seven on the hole and lost by just one stroke. Ever confident, however, Mickelson said after the tournament that he’s still “excited about the foundation [he] built this week.” There really isn’t much to say about this video from the celebrity/amateur portion of the Human Challenge this week until you see it, so please, watch before reading further.

This is a joke, right? I mean, sure, off the rocks and on to the green, fine. I’ve seen it. Heck, I’ve done it. But to hit the ball that far left off the tee, have it kick back in the opposite direction it was traveling all the way across the hole, kick off a mountain, land softly on the green and roll out to birdie range? I don’t know, but if Miguel Angel Jimenez is the most interesting man in golf, Chris Mohan might be the luckiest one.

Other Hot Links:
– TV Preview: Back9Network Original Programming
– Video: Ahmad Rashad Hassled By Random Guy On Driving Range
– Rory McIlroy Dishes on How He Proposed to Caroline Wozniacki
– Lance Armstrong Has His Handicap Down to a 9
– 9 Questions with Picabo Street