Weekend Recap: Rory McIlroy is the Best Golfer in the World 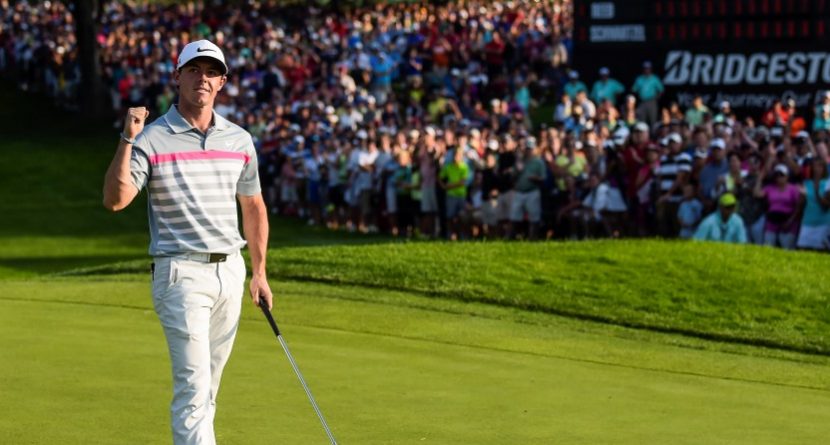 It’s safe to say Rory McIlroy is back, Geoff Ogilvy won a tournament he didn’t even really want to play, and for all the talk about the 56-year-old Bernhard Langer joining the European Ryder Cup team, he’s not winning everything on the senior circuit.

Here’s a look back at the weekend in golf:

Rory McIlroy is officially No. 1 again
Fresh off winning the Open Championship and all the partying that a 25-year-old is wont to do after achieving such an accomplishment, there was no hangover for Rory McIlroy at the WGC-Bridgestone Invitational. Well, maybe there was a bit of one when he posted “just” a 1-under 69 on Thursday – which was worse than some guy named Tiger Woods – but a 6-under 64 the next day put him in contention. That round was overshadowed by Sergio Garcia’s seven straight birdies to close out his Friday, but McIlroy stayed just as stellar with back-to-back 66s on the weekend. That score was five better than Garcia’s Sunday, giving McIlroy a two-shot victory, $1.53 million (which puts him just $765 short of Bubba Watson atop the PGA Tour season money list), and the world No. 1 ranking again. There’s another major this week – guess who’s the favorite?

Tiger Woods’ health back in question
Back to that guy named Woods – he withdrew midway through his round on Sunday citing back spasms. He wasn’t in contention after sitting 1-over through three rounds on a course he’s dominated in the past (eight career victories at Firestone Country Club), but he still could’ve made some money and earned a few much-needed FedExCup points had he been able to finish the round. Instead, he limped off the premises and leaves his availability for next week’s PGA Championship in doubt. Ditto for the rest of already dim-looking season.

Geoff Ogilvy reluctantly shows up in Reno, then wins
After three straight missed cuts, followed by a so-so T-55, followed by decent-but-still disappointing T-34, Geoff Ogilvy didn’t get into the Bridgestone Invitational. So he was kind of looking forward to a week off, even though the PGA Tour still holds an event in Reno, the newly-named Barracuda Championship. “I was 50-50 on coming here this week,” he said. “On Monday night, I had like a really long trip back from (the RBC Canadian Open) and I was tired and over it and frustrated. Everyone talked to me into it. Said, ‘Come to Reno. You’ll like Reno. You’re playing well.'” Indeed, the Aussie played well in Reno, collecting his first victory since 2010. Ogilvy scored 49 points in the modified Stableford event, five better than Justin Hicks.

Kenny Perry knocks off Bernhard Langer
After Bernhard Langer’s 13-stroke victory last week at the Senior Open Championship, coupled with his playoff win at the Senior Players Championship, there was talk this week about putting the 56-year-old German on the European Ryder Cup team. McIlroy doesn’t like the idea: “He (Langer) is not playing against the regular guys week in and week out, but he’s playing great golf, obviously, and what he’s done this year, and (Colin Montgomerie) as well, has been fantastic. If they were to be involved as vice-captains or something, then I’d be all for that, but I don’t think they should be on the team.” If Langer was winning every senior event by 13 strokes, maybe he’d have a case, but he got beat by 53-year-old Kenny Perry this week at the Champions Tour’s 3M Championship. Perry birdied his final hole to fend off Langer by a stroke, giving Perry his seventh career win on the senior circuit.