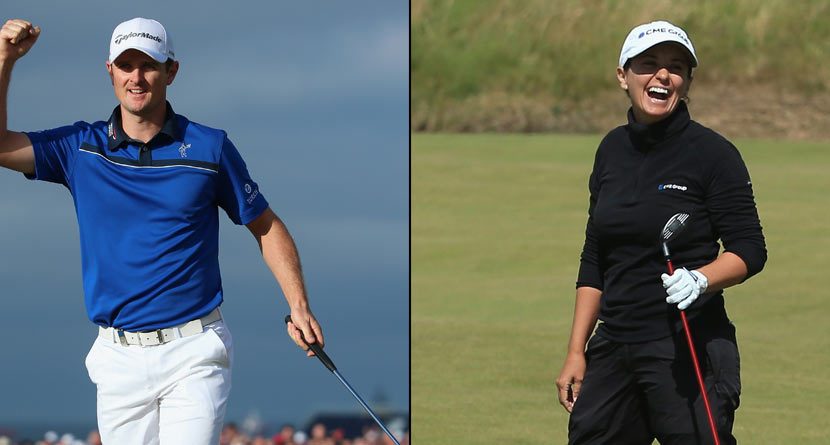 With the Open Championship looming, the golf world was very busy this past week with the four big tours in action — two of them contesting major championships. The weekend gave us two first-time winners, history at the U.S. Senior Open and a few final additions to the field for this week’s Open Championship. Here’s a look back at the weekend in golf:

With John Deere Classic regulars Zach Johnson and Steve Stricker looming, Brian Harman held on and picked up the first victory of his PGA Tour career on Sunday. Harman joins Bubba Watson, Brendon Todd, Harris English, Chris Kirk and Russell Henley as University of Georgia Bulldogs to win on the PGA Tour this year. His win came thanks in large part to an impressive birdie barrage on holes 14-16:

Two-time John Deere champion Zach Johnson made a big run on Sunday, firing 64 to hold the lead in the clubhouse at 21-under. Three-time champion Steve Stricker stumbled, shooting a 1-over par 72 and finishing T-11. “He’s always been known as a gritty player that plays pretty simple golf,” Johnson said of Harman. “To me, it was just a matter of time.”

Thanks to the win, Harman is headed to Royal Liverpool to take part in his first Open Championship. It also gets him into the Master next April.

For the first time in his career, Justin Rose has won two consecutive tournaments. Rose, who hadn’t played since winning the Quicken Loans National at Congressional, fired a final-round 65 to pick up his seventh career title on the European Tour. “This is my first professional win in Scotland so it means lot,” Rose said. “This a great tournament — there’s definitely something special about playing golf up here and the golfing crowd are so knowledgeable and I’ve really got to love this golf course.” Rose began the day in a tie with Scotsman Marc Warren, but separated himself early, birdieing four of his first six holes. He finished the week at 16-under par, good enough for a two-stroke victory over Sweden’s Kristoffer Brogberg. “I couldn’t have scripted it better – I’ve never won two in a row and I’ve certainly never won three in a row,” Rose said. “I’m in unchartered territory.”

Rose will have an opportunity to match Phil Mickelson’s feat from last year — winning the Scottish Open and Open Championship in consecutive weeks — this week at Royal Liverpool.

Winning your first event on tour is always a big deal, but when it comes at a major, it’s always a little more special. For Mo Martin, that was precisely the case at the RICOH Women’s British Open. Martin began the final round at 1-under par and in a tie for seventh. Along with over-par rounds by Inbee Park, Suzann Pettersen and Shanshan Feng, Martin’s clutch eagle on the 18th hole paved the way for her victory.

“I think I still need to be pinched,” Martin told the AP. “Absolutely a dream come true. Safe to say it’s the best week of my life.”

Martin’s victory may come as a bit of a surprise. Coming into this year’s Women’s British Open, her previous best finish in a major championship was a T-29 showing at this year’s Kraft Nabisco Championship. The win moves Martin up from 49th to 19th in the Race to the CME Globe and from 99th to 26th in the Rolex Women’s World Golf Rankings.

Martin’s win also means that Americans have won the first three majors of the year on the LPGA Tour for the first time since 1999. Lexi Thompson and Michelle Wie claimed the the Kraft Nabisco Championship and the U.S. Women’s Open, respectively.

After a career of major disappointment on the PGA and European tours, Colin Montgomerie is now a two-time major champion as a senior. The Scotsman held off Gene Sauers in a three-hole playoff at the U.S. Senior Open to secure his second senior major of 2014. Sauers struggled with the 54-hole lead, stumbling to a 2-over par 73. Montgomerie, on the other hand, shot a 2-under par 69 to force the playoff, which he won by one stroke. Montgomerie played well all week at Oak Tree National in Edmond, Okla., holding the 18- and 36-hole leads. He headed into the weekend “relaxed.”

“The win in the PGA Seniors has given me confidence to go forward here, and it was a long time coming to win a four-round stroke play event in America,” Montgomerie said. “It was 22 years since I first came over here at Pebble Beach in 1992. It’s given me a great deal more confidence in the ability to know that you’ve done it once so you can do it again.”

Do it again, he did. Montgomerie’s win marked the fifth time a player won both the U.S. Senior Open and Senior PGA Championship in the same year. It was the first time since Dan Poole outlasted Tom Watson in 2002.

Harman, Broberg Among Final Players Qualifying for The Open

Harman and Broberg head the final list of players qualifying for this week’s Open Championship, thanks to two great weeks of golf. Harman shot 65-66 on the weekend to hold off John Deere Classic stalwarts Steve Stricker and Zach Johnson for his first career PGA Tour win. After the round, Harman was asked if he had his passport, referring to the fact that he had qualified for the Open Championship. He responded, “Yes, I have my passport … And a couple jackets.”

Broberg may not have won the Scottish Open, but his runner-up finish was enough to get him into the season’s third major. The second-place showing matched his career-best finish, first accomplished in last year’s Alfred Dunhill Championship.

Along with Harman and Broberg, Tyrrell Hatton and Scott Jamieson also punched their tickets to Hoylake thanks to their outstanding play in Scotland.