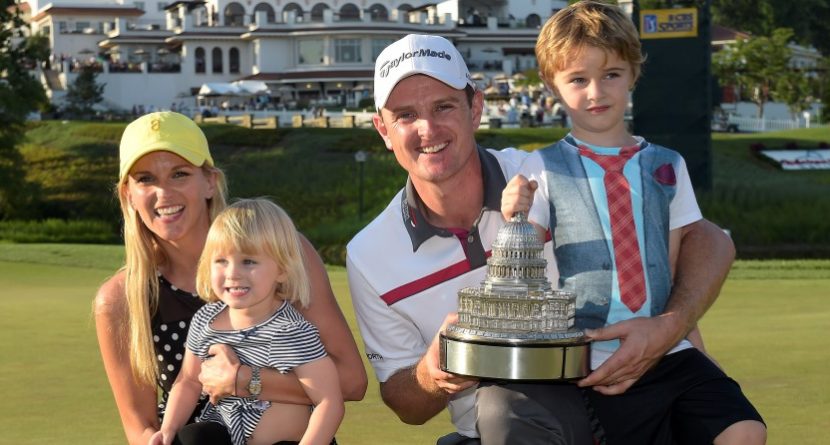 From the World Cup to the world to golf, Sunday was a good day if you like free sports. Although the Netherlands-Mexico soccer game should have gone to extra time, the Greece-Costa Rica game did, and then into a shootout, with the Costa Ricans escaping to the quarterfinals. In golf, each of the three elite men’s tournaments needed playoffs to crown a winner.

Justin Rose captures first win since U.S. Open
Justin Rose, the 2013 U.S. Open champion, played himself into a tie for the lead Sunday in the Quicken Loans National at Congressional by carding three birdies in six holes in the middle of his round, then staying steady with six pars in a row. So when he found water on the 18th, he thought his chances at the win drowned with his ball. But the Englishman made a 15-foot putt for bogey and a 4-under 280 that held up as the three groups behind him came in. Rose squared off with Shawn Stefani in a playoff, playing the same No. 18 hole, and stayed well right of the water, while Stefani dunked his ball. Rose’s par gave him the win, his first since the U.S. Open. Ranked No. 10 in the world, he’s only the third player to grab a PGA Tour victory while ranked in the top 10 this season, joining Zach Johnson, Matt Kuchar and Adam Scott. Stefani’s runner-up is the best of his career and was good enough to get him into the Open Championship. Patrick “Top 5” Reed held a two-shot lead going into Sunday, but carded a 6-over 77 to end up T-11.

Fabrizio Zanotti lands Paraguay’s first victory
A few more players and a few more playoff holes were needed in Germany to decide the BMW International Open, and Fabrizio Zanotti emerged to become the first Paraguayan to win on the European Tour. He claimed a four-man playoff on the fifth extra hole after world No. 2 Henrik Stenson conceded when he couldn’t hole a bunker shot. Gregory Havret of France was eliminated on the second hole while Rafa Cabrera-Bello of Spain went out on the fourth. The 31-year-old Zanotti posted a 7-under 65 for the second straight day, which tied for the lowest of the final round and left him at 19-under 269. Bernhard Langer collects another major for Germany
Two weeks after Martin Kaymer matched countryman Bernhard Langer with two majors on the PGA Tour, Langer went ahead and added a third one at the senior level. And considering the way he’s playing this year, that might not be the last one. Langer outlasted Jeff Sluman on the second playoff hole after they carded scores of -15 (265) at the Senior Players Championship on Sunday in Pittsburgh, giving Langer his first senior major since the two he won in 2010. He took the Senior British Open and U.S. Senior Open that year, and those are the final two senior majors on the calendar for 2014. With his third win of the season, the German is running away with the Charles Schwab Cup points race. World No. 1 Stacy Lewis wins again
Following her runner-up showing last week at the U.S. Women’s Open, world No. 1 Stacy Lewis rolled in birdies on three of her final four holes to take the LPGA Tour’s Walmart NW Arkansas Championship, which isn’t far from Lewis’ alma mater, the University of Arkansas. It marks her third win of the season (though none are majors) and solidifies her spot at No. 1 in a number of LPGA categories (money, scoring average, top-10 finishes, points for the CME Globe). Lewis’ 12-under 201 (only 54 holes were played) was one stroke better than teen phenom Lydia Ko (world No. 2), Cristie Kerr (No. 10) and Angela Stanford (No. 14). Michelle Wie, who won the U.S. Women’s Open, started the final round with a two-shot lead but struggled to a 2-over 73.