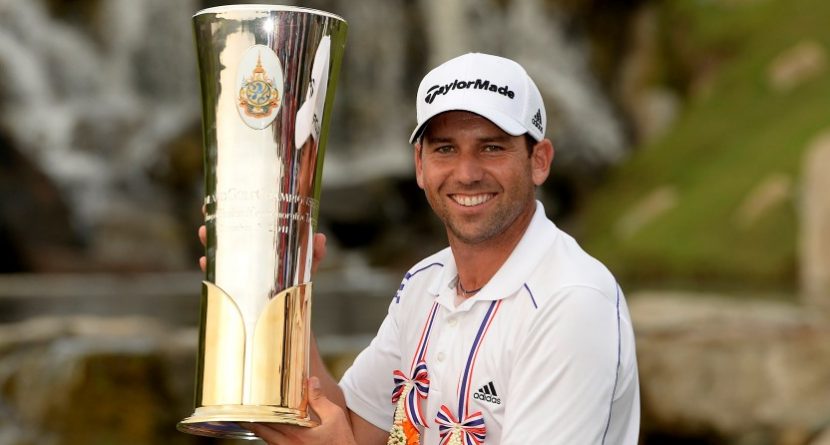 Sergio Garcia, Matt Kuchar and Stewart Cink were among the golfers to nab victories this weekend before returning home for the holidays. A look around the links:

Sergio Garcia wins for first time in 2013
The 33-year-old Spaniard introduced his girlfriend, Katharina Boehm, to the world as his caddie at the Thailand Golf Championship, and the move to mix business and pleasure worked out quite nicely. He dropped in a hole-in-one Friday to jump atop the leaderboard, then held that spot by shooting 65-68 over the weekend. His 22-under 266 bettered Henrik Stenson by four strokes, and notched Garcia his first victory since the Johor Open in Malaysia last December. Kuchar, English team up to take Shootout
Matt Kuchar joined with Harris English to break the tournament course record at the Franklin Templeton Shootout in Naples, Fla. They carded a 34-under 182 – a 64 on Friday in modified alternate-shot, 60 on Saturday in better ball, and a 58 on Sunday in the final-round scramble. The duo topped Retief Goosen and Fredrik Jacobsen by seven strokes, and Kuchar and English each earned $385,000. “This is one of my favorite events of the year,” Kuchar said. “I wish we could play more team events. I realize during the year, that’s difficult but to mix up the formats and have a partner here is just a lot of fun.”

Stewart Cink and son take Father/Son Challenge
North of Naples in Orlando was the Father/Son Challenge, won by pro Stewart Cink and his son, Connor, who is not a regular golfer. The freshman at Clemson was more of a hockey player growing up. “I think it’s pretty monumental,” Stewart Cink said. “Connor doesn’t play golf. We’re not talking about a kid who plays in college or has played on various tours. He hasn’t played 30 rounds since he was 14 years old. He doesn’t play golf, but he’s very talented in a lot of his sports.” The Cinks sank two eagles among their final five holes to win the scramble event by three shots (they were 22-under overall) ahead of Steve and Sam Elkington and Vijay and Qass Singh.

Van der Walt wins Mandela Championship
South African Dawie van der Walt captured the Nelson Mandela Championship by two shots on Saturday in Durban to give a native the victory during a week when the country honored the life of its former president. The tournament was shortened to 54 holes so there would be no action on Sunday, the day of the state funeral for Mandela. Van der Walt’s 15-under gave him his second career European Tour win and edged Matthew Baldwin and Jorge Campillo by two strokes.