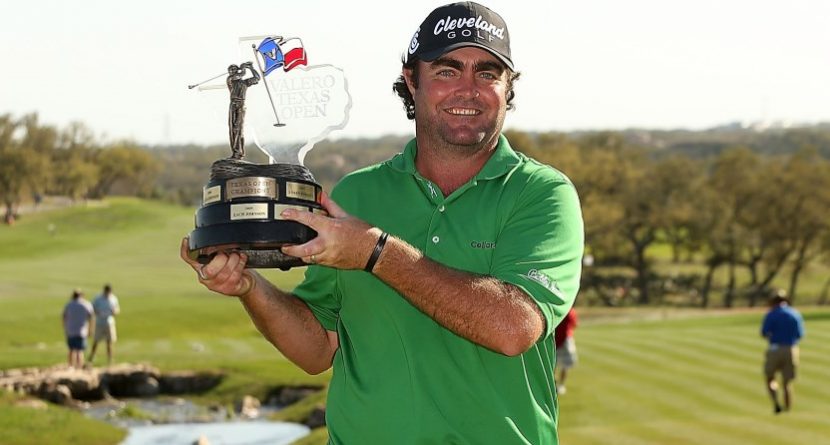 An Aussie collected his first career PGA Tour win, and the Masters invite that comes with it. A few others failed to earn tickets to Augusta, while another big name withdrew, raising concerns about his fitness for the Masters. And a Swede grabbed her second LPGA Tour win of the year, while not even making as much history as a competitor.

A look back at the weekend:

Steven Bowditch books Masters berth
Australia’s Steven Bowditch slept on the 54-hole lead at the Valero Texas Open in San Antonio, knowing he needed only to maintain that edge for 18 more to clinch his first trip to the Masters. Then he played 3-over-par in his first four holes. He proceeded to card a 4-over 76, but that was one stroke ahead of Will MacKenzie and Daniel Summerhays, so Bowditch walked with $1.1 million and a ticket to Augusta in a little more than a week. Bowditch came into San Antonio ranked 339th in the world with just two previous top-10 finishes in eight years on the PGA Tour.

Chesson Hadley, Ryan Palmer miss Masters chances
So with the Texas Open being the last opportunity for players to move within the world rankings’ top 50, which equals a Masters invite, only Bowditch took advantage of the last-ditch attempt. Rookie Chesson Hadley (No. 56) could have gotten in with a sixth-place finish, but he recorded nine bogeys on Sunday en route to an 8-over 80 and a T-56. Finishing in that same spot was Ryan Palmer (No. 62), who could have gotten in by placing in the top three, but never contended and carded an 82 on Sunday.

Phil Mickelson joins injured list
World No. 5 Phil Mickelson wanted to use the Texas Open and this coming week’s Shell Houston Open to tune up for the Masters. Instead, he pulled out on Saturday with a pulled muscle, joining Tiger Woods and Jason Day as top-five players dealing with injuries as the year’s first major quickly approaches. Mickelson said he suffered the right-side injury on his first hole of the day, yet he played 10 holes before withdrawing. He was 1-over for the round, and 4-over overall after barely making the 36-hole cut.

Anna Nordqvist collects Kia Classic
After storming onto the LPGA Tour in 2009 with wins at the LPGA Championship and LPGA Tour Championship, Sweden’s Anna Nordqvist was seemingly the sport’s next big star. However, her next win on tour didn’t come for almost five more years, at the Honda LPGA Thailand last month. But the 26-year-old grabbed her second win this season on Sunday at the Kia Classic, coming from two strokes back at the start of the day and finishing at 5-under 67, 13-under overall, and one shot ahead of Lizette Salas.

Laura Diaz, however, may have made the most history. She scored a hole-in-one on the par-3 third hole Saturday, and aced the par-3 sixth on Sunday, becoming the second person in tour history to drop two aces in the same tournament. Diaz finished T-32 at 2-under overall. Asia surprises Europe with draw at EurAsia Cup
Few people gave Asia much of a chance in the inaugural EurAsia Cup, which pitted top Europeans against top Asians. Asia trailed 7-3 going into the final day on Saturday, much to the thanks of a 5-0 deficit after the first day Thursday. But the Asians took seven of the 10 points up for grabs in the singles matches, leaving the sides even at 10-all for the tournament, and earning a draw.