Weekend Recap: The Return of Ben Crane and Inbee Park 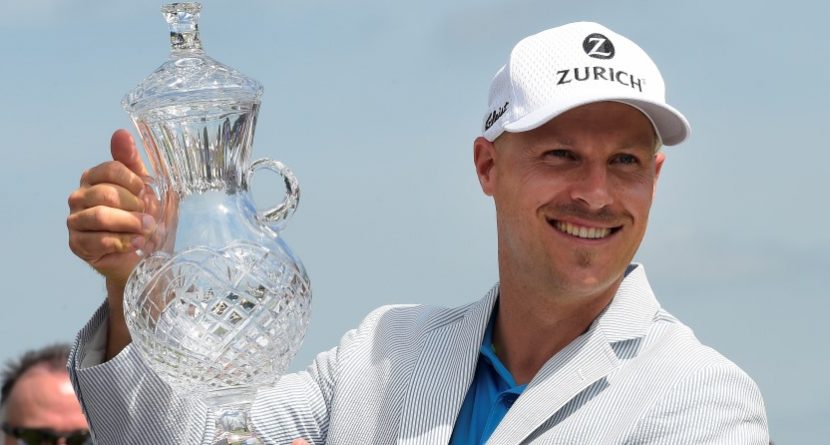 Ben Crane collects first win since 2011
Tour funnyman Ben Crane opened the FedEx St. Jude Classic with a 7-under-par 63, then backed it up with a second-round 65 and third-round 69, the latter of which finished Sunday morning due to weather delays. Holding a three-shot lead as he scurried back to No. 1 to start his final round, Crane had just enough cushion. He posted a final-round, 3-over 73 (finishing at -10 overall) to fend off Troy Merritt by a stroke. Crane carded zero birdies and three bogeys in his final round, but that was all he needed to grab his first victory since October 2011 and a $1.04 million check. Crane entered the week ranked No. 267 in the world and 150th in the FedExCup standings; after his win he’s No. 101 and 41st, respectively.

Phil Mickelson comes close, but still outside top 10
With next week’s U.S. Open squarely on his mind, Phil Mickelson came to the FedEx St. Jude Classic hoping to gather some confidence and momentum to take with him into the only major left off his career accomplishments. We warned him that he didn’t want to win, because St. Jude Classic victors haven’t fared too well at the U.S. Open the next week, but a top-10 finish would’ve been nice – considering he had yet to garner one all season. Mickelson finished stroke back of that mark, placing T-11 at 6 under par. He was in the 60s each of the first three rounds, but posted a final-round, 2-over 72. Had he played just even-par in that fourth round, Mickelson would’ve tied for third. So does that give him something to build on as he heads to Pinehurst? Inbee Park loses No. 1 ranking, responds with win
Maybe not being No. 1 in the world was all Inbee Park needed to notch her first win since the 2013 U.S. Women’s Open? Her 59 weeks atop the women’s golfing world ended after Stacy Lewis grabbed the spot with a win last week, to which Park responded by claiming a three-stroke victory at the Manulife Financial Classic. Sunday’s course-record-tying 10-under 61 brought Park to a 23-under 261 in the final LPGA Tour stop prior to this year’s U.S. Women’s Open, June 19-22. Said Park about the No. 1 ranking, “I’ve got to say, definitely a little bit pressure off of me. At the same time, I think I needed a little bit of motivation. I just didn’t have any win after the U.S. Open. I was playing good but not great. So yeah, I think last week was a very good motivation and inspiration for me. So this week, I thought I needed to step it up a little bit.” Mikael Lundberg caps comeback with 40-foot putt
Entering Sunday six strokes back of the lead at the European Tour’s Lyoness Open, Mikael Lundberg had little reason to believe he’d win his first tournament in six years. But then the Swede shot a 7-under 65 that put him in a playoff with Austria’s Bernd Wiesberger (they were 12-under overall), and Lundberg dropped a 40-foot putt for birdie on the first extra hole. The 40-year-old also won the Russian Open in 2005 and ’08. “It feels fantastic, it was very nice. I made a fantastic putt. I knew I was far behind and I even didn’t think I was going to win. I was just hoping to play well,” Lundberg said. Champions Tour tries out par-3 course
The Champions Tour experimented with a par-3 course for real competition this weekend with the Legends of Golf event, which was won by Jeff Sluman and Fred Funk at 20-under (159) overall. They carded a 6-under-par 48 on Sunday after a 50 on Saturday also on the par-3 layout, and an 11-under 61 in better-ball play Friday on a regulation course. Jim Colbert and Jim Thorpe topped the Legends Division for players 65 and older. U.S. women take back Curtis Cup
Out in St. Louis, the U.S. reclaimed the Curtis Cup, the biennial international competition for amateur women. The Americans beat Britain and Ireland 13-7, thus moving to 28-7-3 in the event’s history. The Europeans won in 2012 in Scotland, handing the Americans their only loss since 1996. Emma Talley of the University of Alabama, the reigning U.S. Women’s Amateur champion, clinched the victory for the U.S. by winning Sunday’s opening singles match.