What is a Jumping Cholla Cactus? This Golf Fan Now Knows 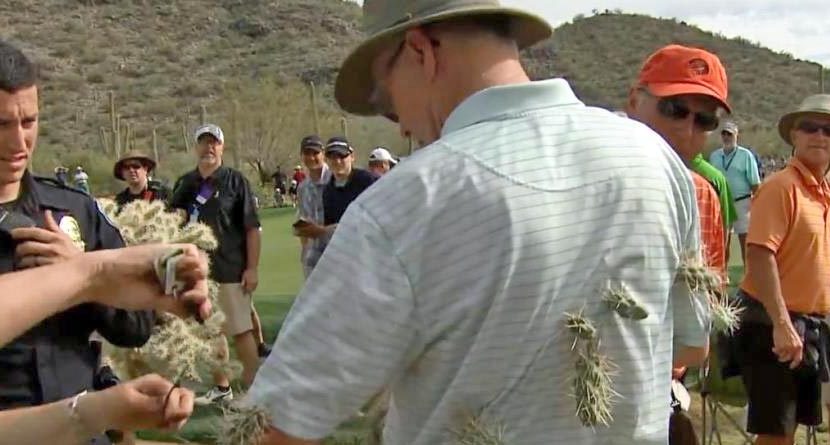 Rory McIlroy found himself in a bit of trouble Wednesday afternoon during his first match at the World Golf Championships-Accenture Match Play Championship. But it was nothing compared to the situation in which he inadvertently put a fan.

McIlroy’s ball on the par-4 15th hole snuggled up against a rock in the desert. There was no telling which way it would fly when he took a swing at it, and after he did, let’s just say it didn’t go the way he envisioned.

So we’re not quite sure if McIlroy’s ball struck that fan, but the wayward shot apparently forced him to encounter a jumping cholla cactus. A what?

According to JumpingCholla.com (which, oddly enough, is not a website dedicated to the cacti, but rather a computer consulting company that takes its name from the feared plant), “The cholla is perhaps the most feared and hated cacti in the southwest desert. If you brush up against one, you will know why.

“The plant has pads that separate easily from the main stem. The spines easily attach to your clothing, your skin, your shoes. Since the plant is covered with spines, it’s difficult to grab and dislodge the pad that has found a new home with you.

“Why are they so difficult to remove? Unlike other varieties of cacti with solid spines, cholla’s actually have hollow spines. Because they are hollow they can easily attach to whatever they touch with their needle like sharpness. If there is moisture, such as with skin, the tips actually curve once they have made contact, locking their spines in place just underneath the skins top layer. OUCH!”

So yeah, that’s a great story to tell the grandkids one day. Hopefully McIlroy gave the guy a signed golf ball or something.