What to Watch For: Masters Moving Day Sets Up Thrilling Finale 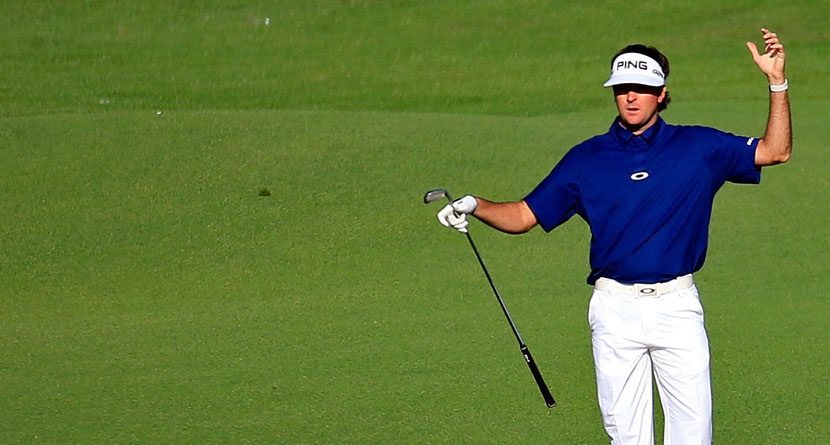 While Saturday at every golf tournament is called “moving day,” this particular one has set the stage for potentially the greatest final round of the Masters since 1986. Sure, there’ve been some pretty incredible finishes lately, but not since Jack Nicklaus roared back and took down Tom Kite, Greg Norman, Tom Watson and Seve Ballesteros has the list of combatants been so potent.

Bubba Watson began the day at 7-under-par with a three-stroke lead over Australia’s John Senden. As the day progressed and players ebbed and flowed up and down the leaderboard, Watson’s lead shrunk to zero, then climbed back to three strokes. After a missing a short putt and bogeying the 16th and stumbling to a 2-over 74, he ended tied for the lead with 20-year-old Jordan Spieth, one stroke ahead of the field. The green jacket could be anyone’s.

What To Watch For On Sunday

The Rookies
No Masters rookie has slipped on the green jacket since Fuzzy Zoeller in 1979 and unless you count Horton Smith in the inaugural tournament in 1935 or Gene Sarazen in his first start in 1936, then Zoeller is the only player to win in his first start. Fuzzy could have some company around 8 p.m. ET tomorrow though, as Spieth and Jonas Blixt have put themselves in position to claim the most coveted prize in all of golf. Spieth will play in the final group with Watson, while the two-time PGA Tour winner Blixt will play in the penultimate group with Matt Kuchar.

The Youngest Ever?
Any time you get to talk topping Tiger, you’re doing something pretty impressive. For Spieth, a win this week wouldn’t only make him the first Masters rookie to win in 35 years, he’d also become the youngest to win the Masters… ever, besting Tiger Woods by a year. Woods set the mark in 1997 at the age of 21. If Spieth wins, it won’t be the first time he’s been the youngest to do something on tour:

The “Old Guys”
Fred Couples won the Masters in 1992 and has been a force to be reckoned with at Augusta his entire career. At 54 years old, he’s four shots off the lead at 1-under. Spain’s Miguel Angel Jimenez recently turned 50 and is still looking for his first major championship. He fired a third-round 66 early on to sit at 3-under for the tournament and give everyone else a number to shoot at Saturday afternoon. While Couples’ back has been an issue for him in the past, we’re all pretty sure Jimenez will be good and limber come Sunday afternoon:

Why is this important? When Jack shot 30 on the back 9 to win his sixth Masters, he was 46 years old. If either one of these two distinguished gentlemen can get it done Sunday, it would beat Jack’s record by eight or four years, respectively. Heck, it’d surpass even Julius Boros’ record from when he won the PGA Championship in 1968 at the age of 48. You just never know anymore. If Tom Watson can have a putt to win the Open at 60, why can’t “Boom-Boom” or golf’s “Most Interesting Man” win the Masters?

Matt Kuchar
Arguably the best player in the game today without a major, Kuchar has played great recently, and after firing a 4-under 68 on Saturday, he finds himself within striking distance of his first major title. Kuchar has played great at Augusta in the past, finishing T-21 as the low amateur in 1998 and finishing T-2 in 2012. His issue lately has been closing out tournaments on Sunday, but that isn’t “typical Kuchar.” Playing from behind ought to suit Kuch well.

Bubba Watson
He might be the most exciting, unpredictable player in the game since John Daly. Watson stumbled to a 2-over 74 on Saturday to fall back into the clutches of Spieth, Kuchar, Blixt and more. Watson didn’t play terribly and appeared to simply suffer from a case of nerves. If Bubba can rely on memory and get around Augusta National the way he did in 2012, he might just claim his second green jacket in three years. If he can’t, Sunday will be wild.

Outside The Top 10
Sure, no one has come from outside the top 10 after 54 holes to win the Masters since Art Wall Jr., in 1959, but this year, the winner may very well be lurking beyond that mark. With Couples, Justin Rose and Kevin Stadler in a three-way tie for the spot, four shots off the lead, it wouldn’t take too much for them to be right in the mix. Certainly, they’ll have the opportunity to post a low number while the final few groups make their way through 14, 15 and 16. Further back than the guys at  T-10 — players at even-par, +1 and +2 — include Jason Day, Steve Stricker, Ian Poulter and Adam Scott.

Just in case you’re wondering, the record for a final-round deficit overcome at the Masters is eight shots by Jackie Burke in 1956. If you really want to grab at straws, the largest deficit overcome on Sunday to win a major was 10 strokes by Paul Lawrie over Jean Van de Velde at the 1999 Open Championship. That being said, I’m not predicting the winner will come from T-34 or deeper.

Rickie Fowler & Miguel Angel Jimenez
This may very well be the most interesting pair with a chance to win the Masters… ever. Everyone is familiar with these two characters. Jimenez loves fast cars, good wine and cigars, and has never won a major. Fowler loves fast cars, action sports and being on the water, and has also never won a major. Jimenez (50) is twice the age of Fowler (25) and has won all over the world to Fowler’s lone win on the PGA Tour. One thing for sure is that Rickie will be decked out in Oklahoma State orange and Jimenez will probably light up a cigar. If these guys can post 3- or 4-under rounds, it’ll make for a colorful Sunday in Augusta.