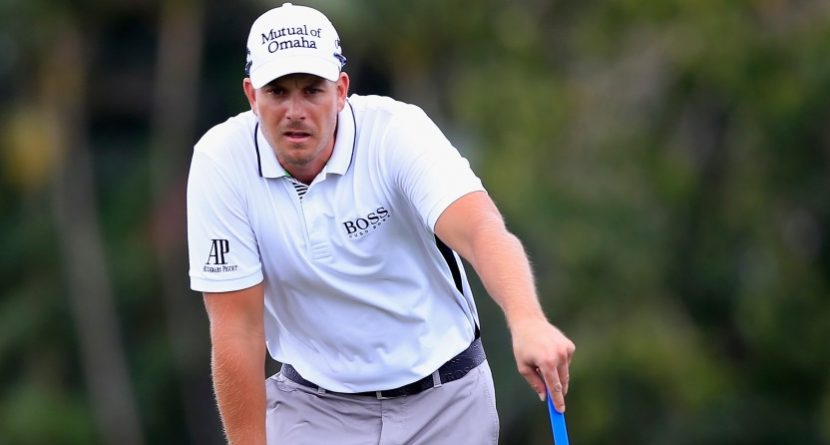 The first round of the WGC-Cadillac Championship finally ended Friday morning, and for some, the re-designed Blue Monster course at Trump National Doral was, well, a monster. And the world’s top three players were not immune.

There was third-ranked Henrik Stenson shanking his approach like a weekend hacker on the second hole Thursday, prior to the two-hour weather delay. He missed the green by 50 yards, had to declare a lost ball, and eventually left with a double-bogey on the hole. Stenson finished 1-over-par on the round (73).

World No. 2 Adam Scott, one of Stenson’s playing partners, enjoyed a wild ride on the back nine. He was 2-under after 10 holes on Thursday when play was called for the day due to darkness. On Friday, Scott promptly dropped six strokes over his first five holes: double-bogey, par, bogey, double-bogey, bogey. He prevented a more dramatic slide with birdies at 16 and 17, but then closed the round with another bogey to finish 3-over (75).

Tiger Woods, the third member of that group, was nearly right there with Scott. After finishing his 10 holes Thursday at 2-over, he started Friday bogey, par, bogey, double-bogey. He then carded three birdies on Nos. 15-17 before adding another bogey at 18 to wind up 4-over (76), his worst score ever at Doral. Yet the wildest roller coaster may have been had by Keegan Bradley, who was at even par when he made the turn Thursday after starting his round on the 10th tee. He quickly birdied Nos. 1 and 2, then made double-bogey at the third hole, and birdie at the fourth before his day ended. On Friday, he picked up where he left off: double-bogey at No. 5 and bogey at six before evening out with pars on holes 7-9. Bradley concluded the first round at 2-over (74).

But at the very bottom of the leaderboard after round one sat Brett Rumford, who didn’t actually play all that awful for 17 holes. His first one of the round, though, was a doozy. He started at No. 10 and sent his first tee shot into the water. He did the same on this second attempt, and his third.

Rumford’s fourth tee shot finally landed on land, and from there he needed only four more shots to drop the ball in the cup. But all in all, he carded an 11 on the hole, six shots over par, or a sextuple-bogey.

That opening score was worse than the Australian shot the entire rest of his round, as he was just 5-over through his next 17 holes (83 for the round).