XGames and Golf Collide With RippedLinks 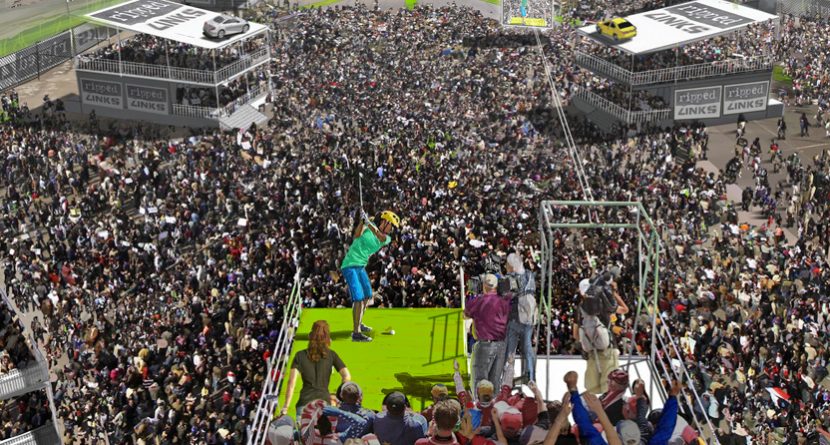 There is a revolution coming in the game of golf and it’s called RippedLinks. For what seems like ever, the PGA Tour has sought to attract and appeal to the largest, most lucrative viewer demographic there is, the 18-36 year old market. With RippedLinks, there is finally a form of golf aimed squarely at attracting these viewers and participants and it could be here sooner than you think.

According to the company’s media release, “RippedLinks is a new golf sport property in development for a 2014 launch,” which “engages with two globally undeserved golf market segments: youth and women.”

Related Link: Is The Pro Golf Season Too Long?

The grand plan for RippedLinks is the brainchild of avid golfers Colin Weston and Philip Davis. Both men come from an architecture background and have worked designing and planning large-scale events such as the Pan-Am Games and the Winter Olympics in Vancouver.

“We were sitting in a sports bar in January 2012 watching hockey and having a beer, and there’s about 20 different sports going on,” said Colin. “And we looked up and saw January golf and thought, ‘wow, that’s boring.’ And if we didn’t care about it, did anyone else?”

The question was: how to make golf not-boring.

“We thought about all the complaints about golf. Too slow, too quiet, too conservative, too constraining… so what’s the opposite of that?” asked Weston. “So we came up with words like fast, loud, edgy and we immediately thought of the action sports scene that has been exploding recently.”

With this in mind, the two developed an idea for an event that combined the skill and precision of golf with the raucous fun and excitement that makes the action sports events like the Dew Tour, Red Bull events and the X Games so popular. But how would it work?

“As a business play, very simply, we started talking to people in the golf industry and they all said, “we love this idea, golf needs some type of platform or vehicle to attract a younger audience,” said Weston. “The PGA Tour is a brand. It can’t attract everybody. At least 75% of their audience is between the age of 40 and dead. You’ve got to make [golf] more affordable, less time consuming and easier to play.”

The RippedLinks brand of golf focuses on inclusion for all and that means making it a format where elite golfers can compete on the same level. Weston said excitedly, that RippedLinks has the ability to “empower women, one swing at a time”.

“There won’t be any 300-yard drives or crazy-long holes, which means men and women can go head-to-head, straight-up in these events.”

A RippedLinks event would be a 3-hole par-3 round, playing to the same green with three different tees set at three different yardages, all around 140 yards and in. Players would then zip-line down from the tee to the green to speed up play and add excitement. Because of this, RippedLinks can take “golf off the golf course, to places that heighten the visual spectacle and playing challenge – city centers, iconic beaches, and four-season resorts.”

Action sports keep blowing up in popularity with all the Dew Tour, Monster, Red Bull stuff. It’s massive,” said Weston. “We’ve spent a lot of time putting this together in a compelling, money-making and scalable fashion. That being said, we’re looking for all of these elements without being reality show-ish. Ultimately, this is about the golf.”

RippedLinks participants would ideally be an even mix of men and women who are scratch or single-digit handicaps between the ages of 18 and 30, ensuring the quality of the golf. Each field would be made up of 81 participants, playing in groups of three. In the event of a tie, a sudden-death closest to the pin competition would determine who advances.

While game play is covered, the field of play is still a bit of a question.  Clearly basketball courts, hockey rinks and skate ramps can be assembled and disassembled quickly but this endeavor isn’t something that has been done before. There are still questions, but Weston is confident about the process.

“We’re looking at synthetic greens. Philip has really spearheaded the research on this, but we are confident in the technology of artificial greens as far as the natural response,” said Weston.  “Obviously with such a high importance on the golf, that’s a place we will be researching and making sure that we get that right.”

There are still a number of milestones to reach regarding broadcast content distribution and sponsorship deals for RippedLinks, but the first event is tentatively scheduled next year in Southern California as a demonstration with a 27-player field.

“As an architect, I have the experience working on complex $500 to $800 million hospital projects with lots of balls in the air and plates spinning. I’m used to that,” said Weston. “Life’s too short to be working on uninspiring projects. Architecture may sound glamorous but it’s a lot like practicing law. It’s a lot of grinding, whereas this is fun.”

RippedLinks aims to begin touring events around the country starting in 2015 with preliminary and exhibition events in the fall of 2014. Sponsorship opportunities are available on their site, RippedLinks.com and fan information on their Facebook page.