You Could Own Rory McIlroy’s Open Championship Ball 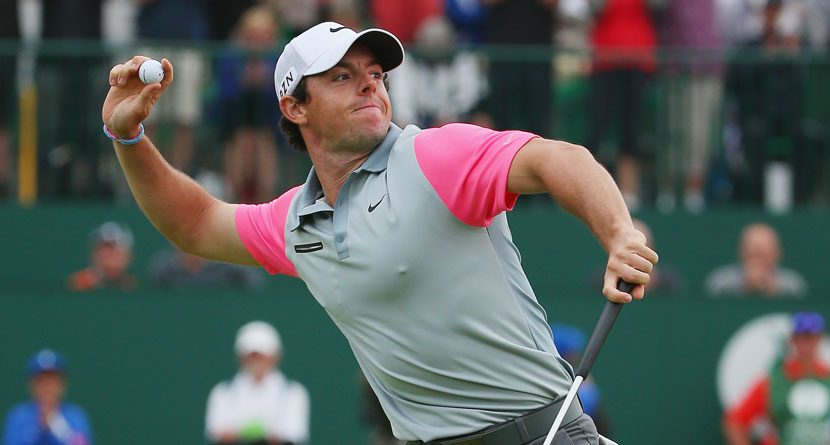 When Rory McIlroy sank his final putt on the 72nd hole to win the Open Championship, he did something I never thought a golfer would do: He threw the ball he used to win his third major championship into the crowd! (Gasp!)

Of course, it was a gracious gesture by the 25-year-old, but it’s the ball used to win a major. And one lucky fan got it, but didn’t keep it for long. After McIlroy tossed it into the gallery, the guys at Green Jacket Auctions went on a mission to find — and acquire — that little dimpled piece of history. And they did so by taking the hunt to the masses.

“We tweeted out a $10,000 offer to whoever had the ball,” Ryan Carey, co-owner of Green Jacket Auctions, told Back9Network. “People were saying it’s this guy Lee Horner from the UK that has it. A day or two later we reached out to him and went back and forth for a few days, but he was reluctant to sell it.”

Horner of Leeds, England, was the fortunate fan who caught the ball, and now he’s on track to make a pretty penny. Hopefully more than the $10,000 that he turned down.

“We’ve never experienced an 18th hole ball situation before,” Carey said. “This is a unique opportunity. They’re so hard to authenticate, but this is one of those rare cases where we can.”

And that’s exactly what they did, simply by looking at photos of Horner with the ball outside of a pavilion at The Open, as well as TV footage of him with the ball in the crowd.

Oh, and if that wasn’t enough, Nike Golf confirmed the authenticity, itself.

So what do you think it’s worth to own a such a unique piece of memorabilia from what could be one of the greatest golfers of all time? If it’s as valuable as a Bobby Jones signed golf ball that sold for $55,000, it’ll be worth plenty. But we will have to wait and see.

And while we’re at it, why not take a peek at Back9’s upcoming original show starring the good folks at Green Jacket Auctions, “Golf Treasures.”